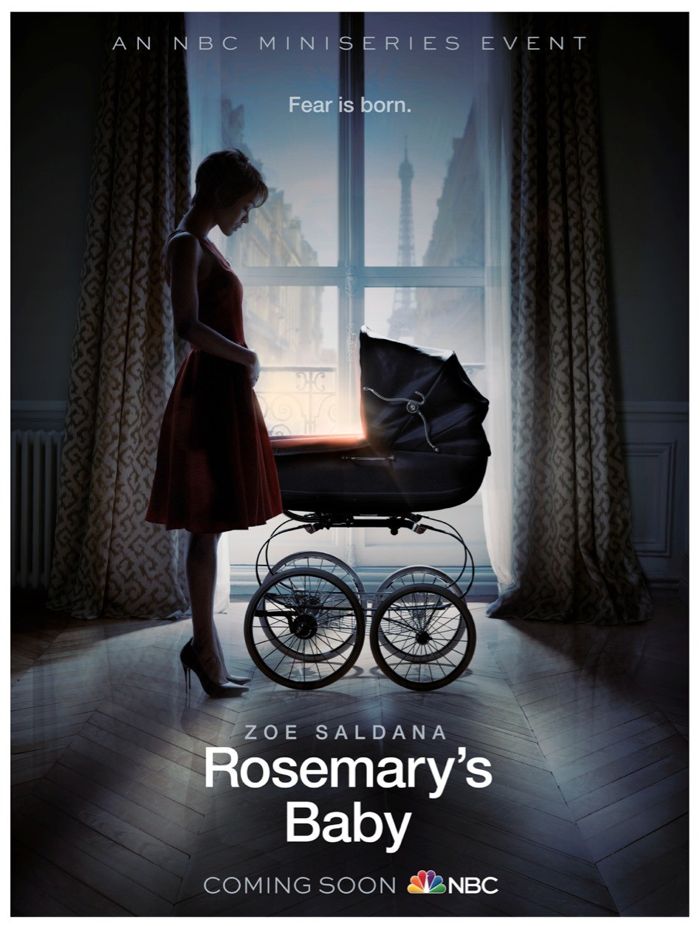 Based on the 1967 best-selling suspense novel by Ira Levin, this new adaptation of “Rosemary’s Baby” centers on a young married couple who escapes New York and moves to Paris with hopes of leaving their sad past behind. After a series of unfortunate events, Rosemary and Guy Woodhouse are presented with an offer they can’t refuse – an apartment at the most prestigious address in the city. Problem is, it comes with a haunted past and an immeasurable price.

Rosemary (Zoe Saldana, “Avatar,” “Star Trek Into Darkness”) and Guy (Patrick J. Adams, “Suits”) are incredulous at their good fortune and find comfort in a strange city among their new friends and neighbors, the Castevets. This well-to-do successful older couple takes the newcomers under their wing and become very involved with the Woodhouses’ lives. Things seem to be perfect as Rosemary becomes pregnant and Guy’s career takes off. As their spirited best friend, Guy’s co-worker Julie (Christina Cole), spends quality time with Rosemary in the city, she finds Rosemary’s health worrying and cautions both of them that something isn’t right. Soon there are other signs warning Rosemary to be careful.

Guy seems to be pulling away from Rosemary and spending a great deal of time hanging around with Roman Castevet (Jason Isaacs, “Harry Potter” franchise). Roman’s wife, the whimsical Margaux Castevet (Carole Bouquet, “For Your Eyes Only”), assures Rosemary her herbs and holistic medicine will help with the pregnancy, but are they helping or hurting? Rosemary’s quizzical nature leads her to investigate the building and its past residents. She uncovers a dark past and realizes who Roman Castevet truly is. But is it too late? Are the Castavets’ perceived sinister motives legitimate or all in the pregnancy brain of Rosemary?

In this new four-hour, two-part psychological thriller written by Scott Abbott (“Queen of the Damned,”) and James Wong (“Final Destination 3,” “American Horror Story,” “The X-Files”) and directed by Agnieszka Holland (“Europa Europa,” “The Wire,” “Treme”), Rosemary quickly finds herself surrounded by peculiar people and startling occurrences. Isolated in her apartment in a city where she doesn’t speak the language, she begins to fear the worst: Guy may have made a pact with their neighbors, promising their newborn as a human sacrifice in occult rituals in exchange for a writing career. To what lengths would someone be willing to go for success and fortune?