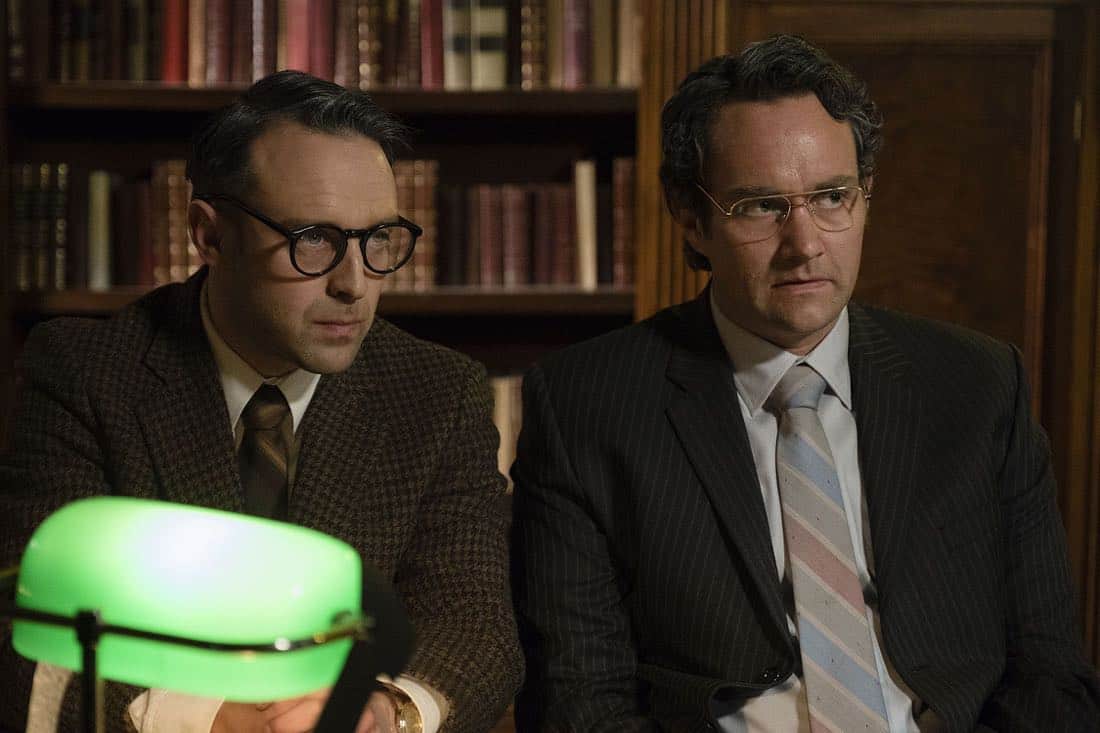 Successfully carving out a career as a working actor is every actor’s dream and for Brendan Taylor that achievement has been rewarding in ways he never imagined. As can be seen in his latest portrayal, bringing characters to life on screen and making them an integral part of the story is clearly a passion of Brendan. In an exclusive interview, Brendan previews a bit of his pivotal role in the new AMC series “Robert Kirkman’s Secret History of Comics – The Trials of Superman” and shares some of the insights he has gleaned during his years as an actor.

What initially appealed to you about the role of Jerry Siegel and working on “AMC Visionaries: Robert Kirkman’s Secret History of Comics – The Trials of Superman”?
BRENDAN: Well, first of all, the chance to work on something related to the icon that is Superman was very exciting. But getting to learn about Jerry’s life and the details of the story about how the Man of Steel came to be and to go on that ride as an actor was very appealing.

How would you describe who Jerry Siegel is?
BRENDAN: Jerry Siegel was a prolific science-fiction writer, and among many other works, is the co-creator of Superman. With the help of his friend Joe Shuster, they came up with the original story and design of the character we all know and love.

What do you most admire and/or like about him?
BRENDAN: Jerry was known as a pretty shy and unpopular kid growing up, but stuck to the things he knew and loved. I was very much the same growing up, so I can relate to him. Nowadays, it’s more cool to be nerdy, but I admire him – and thank him – for persevering in his passion back in the day! It’s common to hear that comic book writers often write themselves into their stories as a way to live a fantasy, so it’s very easy to reach the conclusion that perhaps Clark Kent was based off his real self, and the alter ego Superman was his fantasy self.

What was it like working alongside such a talented ensemble on “AMC Visionaries: Robert Kirkman’s Secret History of Comics – The Trials of Superman”? Who did you get to work the most with?
BRENDAN: It was such a pleasure working with everyone on this show, both cast and crew. Blaine Anderson, who plays Joe Shuster is a good friend of mine, so when I found out we were going to work together, I couldn’t have been happier. I definitely spent the most time with him as Joe and Jerry were almost always together. Emma Middleton — who plays Joanne Kovacs, Jerry’s wife and the inspiration for Lois Lane — was also fantastic, and Rory Karpf — the director — was so fun to work with.

Any favorite scenes that you got to work on?
BRENDAN: It’s hard to pick one, but Blaine and I got to wear aging makeup and prosthetics during part of the episode, so getting to explore old age was really interesting. Looking in the mirror was a sobering experience! Also, getting to feel what it’s like to have a friend at my side after so many decades was amazing. I’m so happy that Jerry and Joe had such a long friendship; one should be so lucky!

Then what is your favorite part about working on the show?
BRENDAN: Being a comic geek and getting to work on a show affiliated with the most iconic comic character of all time was a real thrill. To get to do it with friends was an even bigger thrill.

What has been the one thing you as an actor haven taken away from working on “AMC Visionaries: Robert Kirkman’s Secret History of Comics – The Trials of Superman”?
BRENDAN: Well, just having the chance to tell such an important story is so great. It’s an honor to be asked to portray a real person, regardless of who they are. It’s not to be taken lightly and I think you must show the utmost respect.

What do you hope viewers to take away from watching “AMC Visionaries: Robert Kirkman’s Secret History of Comics – The Trials of Superman”?
BRENDAN: I think in this age of consumer culture and immediate gratification, learning about the past is an important thing in general. We don’t always think about where content comes from. I think that in recent years, there’s been a spike in interest in the world of fandom to know more about what goes on behind the scenes, and the technology exists to share that information. I hope that by learning about the struggles of Jerry and Joe, people can gain an even bigger appreciation, and become bigger fans of Superman.

What is the biggest challenge working on this project?
BRENDAN: Probably dealing with the time constraints. We only had about a week and a bit from when we got the roles to when we started shooting. I would have loved to spend weeks researching this story and these men even more.

What is the biggest surprise working on “AMC Visionaries: Robert Kirkman’s Secret History of Comics – The Trials Of Superman”?
BRENDAN: The biggest surprise would probably be that, for one, this story of their struggle spanned many decades, but also, that it had never really been told before in this way. Learning that there would be some really incredible people interviewed and integrated into this episode was fun, and I hope it makes it more exciting!

What has surprised you most about your career to date?
BRENDAN: That a tall actor can book work? Haha….I’m 6’5”, and I always thought that I might be “too tall for movies,” but I think I’ve proven that wrong! Also, that I started relatively late. I missed out on teenage and college roles, yet I found success a bit later in life.

At this stage of your career, what do you think you have learned from the amazing variety of roles and projects you have worked on?
BRENDAN: I mean, I’ve learned just so much from my job. I barely think of it as my job, because it’s so fun, when I get to do it. Also, I think the key is having, as you mentioned, an amazing variety of roles. I credit all of my theatre training and all the plays and short films I’ve done to have helped get me to where I am. I’ve also played some very odd characters over the years, so I pride myself on being a versatile actor.

You are also appearing in Season 2 of E!’s THE ARRANGEMENT. What can you share about your role in that show? Any cool experiences while working on it?
BRENDAN: Well, you can also see me on the first season of THE ARRANGEMENT as the same character. I play Isaac, and he’s a scientist that works for the leader of the Institute of the Higher Mind. I get to play a bad guy, and it’s awesome!

Then what are the perks of where you are in your career right now?
BRENDAN: The biggest perk for me right now would have to be that it’s my only job. Not only is that a benefit time-wise, as I’m not spread thin with unrelated work, but focus-wise, I can just concentrate on auditions, learning lines, researching, and writing. I’m so grateful to be where I’m at, and I absolutely do not take it for granted. I work very hard and take full advantage of my opportunities.

If there were one role you would like to revisit, which would it be and why?
BRENDAN: Too many! Through all the plays and Film and TV roles I’ve done, it’s hard to choose. I had a small role in season two of FX’s FARGO that was so fun to play. I was an old Hollywood-type actor, playing a French soldier in WW2 in an old black and white film that Kirsten Dunst’s character watches. I wish I got to shoot that whole mini-movie!

Do any of your characters and the situations they find themselves in ever leave a lasting impression on you?
BRENDAN: Absolutely. I always feel great sympathy and empathy for the characters I play. Getting to literally put yourself in someone else’s shoes is a humbling experience. By learning and listening to anyone’s story, fictional or real, you learn about yourself, and how to go about your own life.

Has there been any great advice you have gotten? What advice would you offer to other upcoming and aspiring actors?
BRENDAN: He definitely wasn’t the first to say it, but when chatting about my career with Stephen Amell of ARROW a few years ago, he told me “There are no small parts.” That’s the first time I really heard that. The advice I would offer to aspiring actors is: Be dedicated. You don’t have to be concerned about whether you are good or bad. Just be dedicated to your craft, and you will find success.

Do you have any other upcoming projects that you can share that fans should keep an eye out for?
BRENDAN: Among other things, you can catch me reprising my role on Syfy’s THE MAGICIANS in this upcoming season. 2018 will be a busy year, so please follow me @MrBrendanTaylor on Twitter, Facebook and Instagram for updates and visit Brendan-Taylor.com

To discover the men behind the most iconic superhero role ever created, be sure to tune in for the premiere of “AMC Visionaries: Robert Kirkman’s Secret History of Comics – The Trials of Superman” on Monday, November 20th at 10PM ET/PT and 9PM CT exclusively on AMC. Then to follow Brendan Taylor’s future endeavors and projects, you can follow him @MrBrendanTaylor on Twitter, Instagram, and Facebook and be sure to check out his website Brendan-Taylor.com

“The Trials of Superman” clip: