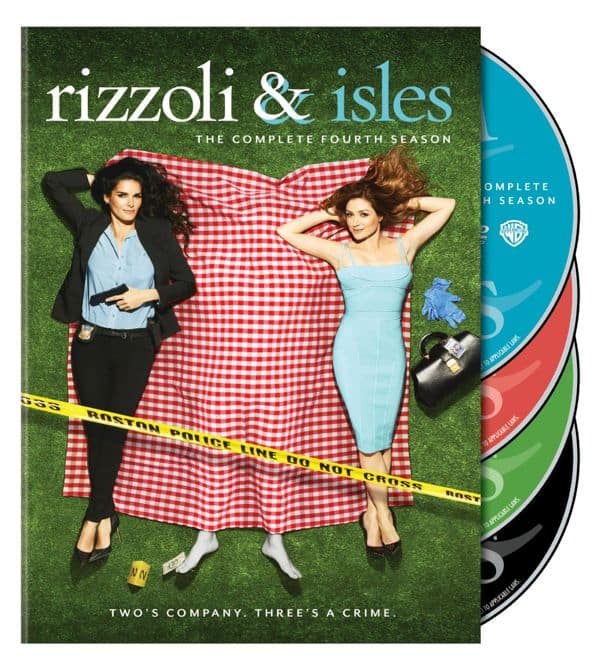 Seat42f and Warner Bros. Home Entertainment have teamed up to give THREE lucky winners a copy of RIZZOLI & ISLES Season 4 on DVD. For a chance to win leave a comment below telling us why you want to add RIZZOLI & ISLES Season 4 to your DVD collection. Only one entry per person. Contest ends June 24th. Winners will be notified on June 25th via email so make sure to use a valid email address when you post your comment.

Angie Harmon (Law & Order) and Sasha Alexander (NCIS) are back as one of TV’s favorite crime-fighting duos and ready to entertain viewers on DVD with Warner Bros. Home Entertainment’s (WBHE) release of Rizzoli & Isles: The Complete Fourth Season, available June 10, 2014. Now fans can own all 16 thrilling episodes from the series’ fourth season plus never-before-seen featurettes.  Rizzoli & Isles: The Complete Fourth Season will be released in time for the series’ fifth season premiere on TNT.  This DVD set will retail for $39.98 SRP.

Based on the best-selling crime thriller books by Tess Gerritsen and developed by writer and former crime reporter Janet Tamaro (Bones, Lost), Rizzoli & Isles focuses on tough-as-nails Boston police detective Jane Rizzoli (Harmon), who has an uncompromisingly brash and beautiful bull-in-a-china shop approach to both cases and life, and the brilliant medical examiner from a privileged background, Dr. Maura Isles (Alexander), who may be the best-dressed science nerd in New England.  Together they are close friends and complete opposites who solve some of Boston’s most notorious crimes.

Rizzoli & Isles has remained a top ratings performer. During season four, the smash-hit police-procedural was #1 among Total Viewers, Adults 18–49 & 25–54 and Women 18–49 & 25–54 in its Tuesday 9–10 p.m. time period versus all Basic Cable networks, and it ranked as TNT’s #1 series among Total Viewers and Women 18–49 & 25–54. The program averaged nearly eight million viewers per episode, which resulted in a seven percent increase versus season three. During the show’s fourth season, Rizzoli & Isles gained more than 2.6 million viewers to date with the inclusion of Live+7 versus Live+Same Day (7.9 million versus 5.2 million).*

“Jane and Maura’s relationship is fresh and fun, and viewers love them as a team. The unique way in which the two relate to one another is one of the reasons this series has become such a success,” said Rosemary Markson, WBHE Senior Vice President, TV and Special Interest Marketing. She added, “Season after season, Rizzoli & Isles continues to deliver ratings. It has proven to be a solid, enduring hit. We are delighted to offer consumers another season of this remarkable show.”

In addition to Harmon and Alexander, the series stars Jordan Bridges (Rushlights,Mona Lisa Smile) as Frankie Rizzoli Jr., Jane’s younger brother and a Boston patrol officer who is following in her footsteps as a detective;  Lee Thompson Young (FlashForward) as Jane’s partner, the computer savvy but squeamish Detective Barry Frost; Brian Goodman (Revenge) as Lieutenant Detective Sean Cavanaugh, whose knowledge of the hardscrabble back alleys of Boston and history as a detective make him the perfect choice to head the Homicide unit; with Bruce McGill (Law Abiding Citizen) as the seasoned and lovable Detective Vince Korsak, Rizzoli’s former partner who was initially hurt to find Jane partnered with Frost; and Lorraine Bracco (The Sopranos) as Jane’s nosy but warm-hearted mother, Angela Rizzoli, who moved into Maura’s guesthouse after her recent divorce and works at the coffee shop inside the Boston Police Department.