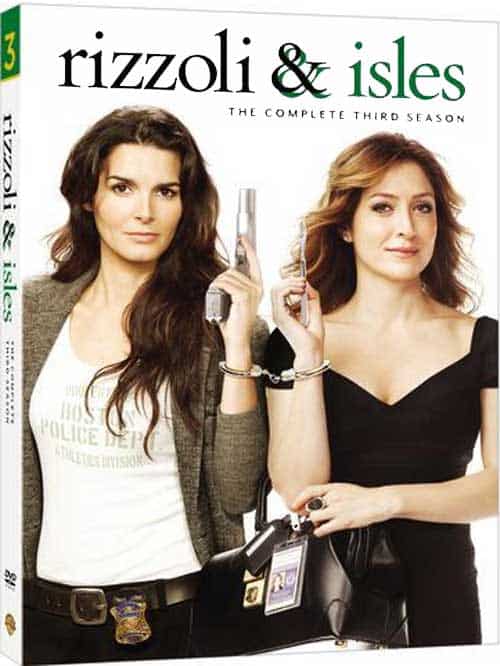 Seat42f and Warner Bros. Home Entertainment have teamed up to give FIVE lucky winners a copy of RIZZOLI & ISLES Season 3 on DVD. For a chance to win leave a comment below telling us why you want to add RIZZOLI & ISLES Season 3 to your DVD collection. Only one entry per person. Contest ends June 18th. Winners will be notified on June 19th via email so make sure to use a valid email address when you post your comment.

Based on the best-selling crime thriller books by Tess Gerritsen and developed by writer and former crime reporter Janet Tamaro (Bones, Lost), Rizzoli & Isles stars Angie Harmon as Boston detective Jane Rizzoli, and Sasha Alexander as medical examiner Maura Isles.  Together they are close friends and complete opposites who solve some of Boston’s most notorious crimes. In season three, Jane and Maura must set aside their personal difficulties in order to keep on top of the city’s most heinous murder cases. Yet analyzing corpses and tracking killers is child’s play compared to the complications that arise from both friends’ respective parental units: Angela falls for Jane’s boss, Maura meets her biological mother, and Jane’s infant nephew is the son of either her brother…or her father! Using intellect and instinct, the best friends do what it takes to regain each other’s trust — after all, the season starts when Jane has just shot Maura’s biological father — while they bust criminals.

In its third season, Rizzoli & Isles continued to be a major ratings hit for TNT. Season three ranked as TNT’s highest rated series among Females 18-49 and 25-54. The third season delivered an average of 7.5 million total viewers (Live+7) and was TNT’s most-watched series.