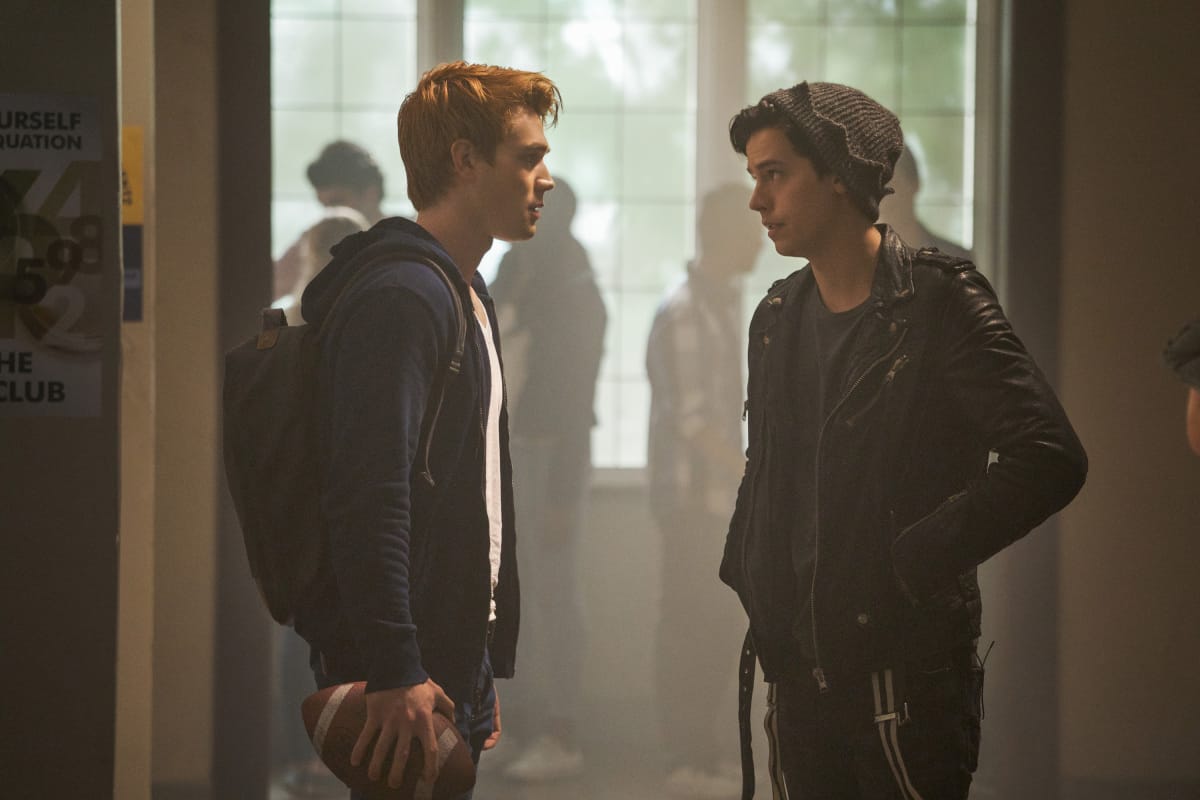 While not quite your average villain from Hell, the Black Hood Killer sure seems determined to bring down holy vengeance on those he deems have sinned in Riverdale. But just which of the seven deadly sins is he holding the town inhabitants responsible for? In the Season 1 finale, the Black Hood Killer shot Fred (Luke Perry) for adultery, in the Season 2 premiere, he strangled Ms. Grundy (Sarah Habel) for seducing underage teen boys, and then he shot Moose (Cody Kearsley) for simply making out with Midge (Emilija Baranac) in a parked car.

For a man determined to make the sinners in Riverdale pay for their indiscretions and sins, the Black Hood Killer seems to be focused on just a few sins. He has shot two men and strangled one woman, all for assumed sexual impropriety — Fred and Hermoine (Marisol Nichols) had barely gone on a date, Moose and Midge were on an actual date, and Ms. Grundy — well, she had definitely engaged in sexual impropriety with Archie (KJ Apa). So out of all the signs and sinners in Riverdale, these were the first people he targeted.

Then of all curious things, the Black Hood Killer decided to strike up an unholy fascination with Betty (Lili Reinhardt), tormenting her with letter and calls, grooming her into being an accessory in his evil scheme against the sinners of Riverdale. Tasked with tracking down the identity of the Sugar Man, the man responsible for selling Jingle Jangle drugs inside the high school, Betty thought she could identify the Sugar Man to the police, thereby derailing the Black Hood Killer’s plan to make the sinners of Riverdale pay for their indiscretions and crimes. But, terrifyingly, jail cell bars did not stop the Black Hood Killer as he took the life of the Sugar Man inside the walls of the police station.

In this week’s episode “Tales From The Darkside,” the sins start to fester within Riverdale. First, Josie (Ashleigh Murray) finds herself the target of a stalker, as well as the recipient of unwanted attentions of another admirer. Then Jughead (Cole Sprouse) becomes ensnared even further in the Serpents’ lair as he fulfills an obligation he undertakes to protect his father. And while seeking the Black Hood Killer’s identity and in an effort to eliminate the suspects, Betty and Veronica (Camilla Mendes) dig deeper into the sins of Sheriff Keller (Martin Cummins). After all, how did the Black Hood Killer manage to kill the Sugar Man right under the sheriff’s nose in his own jail cell if he were not already a member of the local police force?

In the meantime, the Black Hood Killer has thrown down the gauntlet challenging Riverdale to live sin-free or suffer his wrath. But just what sins is he tracking: cheating, lying, stalking, harassing, fraud, illegal enterprise — or is there an invisible line that they must not cross in a world of potential sins? And what penalty will be paid once that line is crossed? Whose death should they now fear?

To find out who could potentially be the Black Hood Killer’s next target, be sure to tune in for an all new episode of RIVERDALE on Wednesday, November 29th at 8:00 p.m. on the CW.

“Tales From The Darkside” preview: