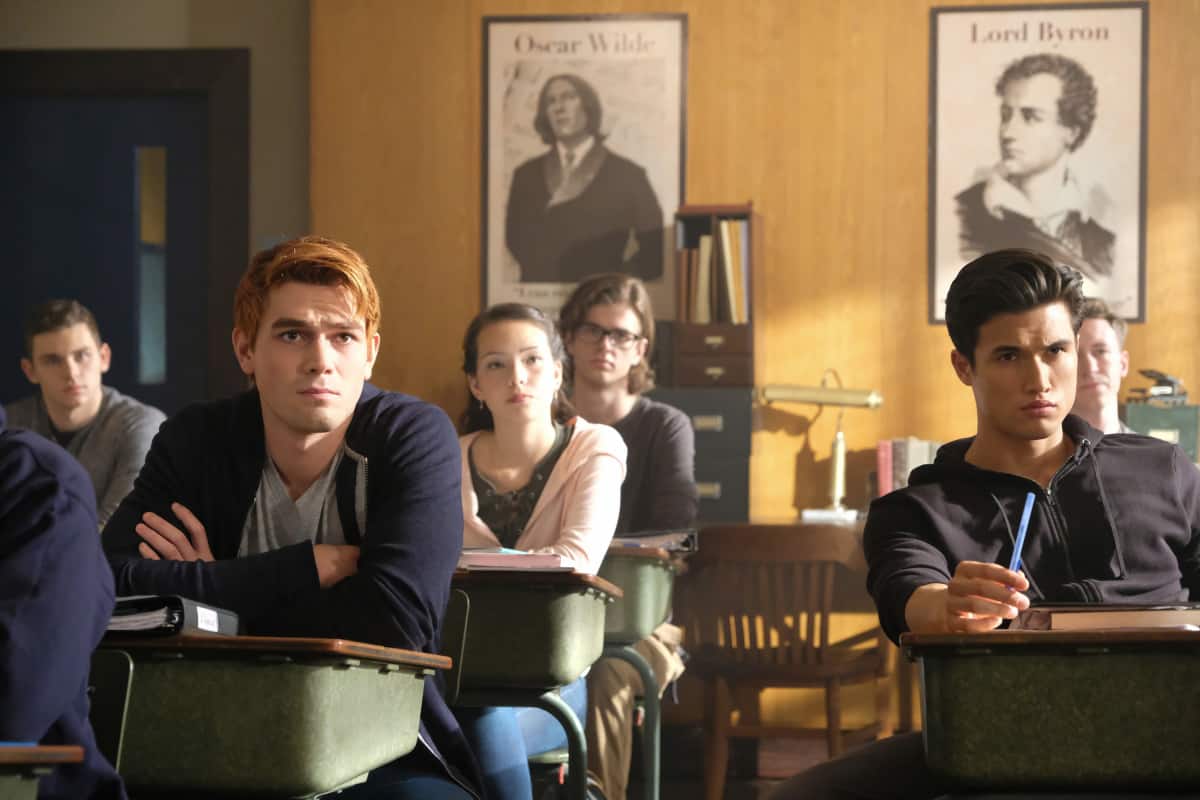 The CW drama series RIVERDALE began its story with the brutal murder of a young teen and the swirling mystery and violence that erupted in its aftermath. Season 1 took viewers down a dark rabbit hole that was not as much “Alice In Wonderland” as it was akin to slipping into a putrid pool right out of TWIN PEAKS. In the process, it shed light on long buried secrets and murky relationships among the town’s inhabitants.

Capturing attention right away were RIVERDALE’s high school teens: Archie (KJ Apa), Betty (Lili Reinhardt), Veronica (Camilla Mendes), Jughead (Cole Sprouse), Cheryl Blossom (Madeleine Petsch), Kevin Keller (Casey Cott), Josie (Ashleigh Murray), along with their wayward parents, who have their fair share of skeletons in all their closets. The show teetered between salacious scandals and the brooding angst of the lovelorn. But when all was said and done, at the end of Season 1, there was a glimmer of hope that the cycle of violence had been broken. That Jason Blossom’s (Trevor Stines) killer had been exposed and they could resume their quiet, carefree lives. Yet, as they quickly discovered, once the glass globe surrounding their dreamlike world had been broken, that peace and tranquility was gone forever.

Season 1 ended with a gunshot ringing out and Season 2 opened seconds later to reveal the harrowing fate of Fred Andrews (Luke Perry). Fred may have survived his point-blank gunshot, but the emotional scarring from that horrifying moment shall haunt and torment Fred and Archie.

Season 2 brings even more violence to their doorstep as seen in the closing moments of the first episode, when Ms. Grundy (Sarah Habel) was strangled to death by the very same violin bow that Archie gave her — and the true horror of Season 2 becomes apparent: Fred and Archie are not the only ones facing death in RIVERDALE. The second episode will address whether Fred is still a target since he cheated death and will shed light on why Archie did not meet a similar fate when Pop’s Diner that night. Worse yet, why was Ms. Grundy on the killer’s list and who is next? For surely, the killer is not done yet.

The violence long kept at bay in Riverdale is reaching a boiling point and will soon erupt. Jason Blossom’s death resulted in the unexpected suicide of Clifford Blossom (Barclay Hope), which is looking more and more like a homicide either at the hands of Cheryl and her mother, or by Cheryl alone in retribution for him killing Jason. Which subsequently led to the burning down of the Blossom manor with Cheryl’s mother was trapped inside, which we are to assume adds an attempted matricide feather to Cheryl’s murder cap.

Another specter of violence portends as Jughead tries to walk the fine line between joining and aligning with the Southside Serpents — a role bestowed upon him by his father F.P. (Skeet Ulrich), making Jughead the ordained prince of the Southside Serpents. But does that mean Jughead inherits the responsibility of ensuring that the Serpents’ violent tendencies are kept in check? And who will protect Jughead if he does nor fully commit and join the Serpents’ brotherhood of crime? Will there be any way of escaping the path of destiny carved out before him?

And let us not forget, Hiram Lodge (Mark Consuelos). Fresh from his jail cell, Hiram looms like a scorpion ready to sting. Just what hellfire shall he rain down upon the unsuspecting residents of Riverdale?

Violence has had a long history in the town of Riverdale and Jason Blossom’s murder has unleashed even more of it as the cracks in the town’s facade revealed the darker natures and hidden desires long thought carefully buried. For the moment, everyone’s attention is on the serial killer as he appears to be something right out of the horror film SCREAM [perhaps in homage to Skeet Ulrich’s role in the film]. But surely someone should be keeping close watch on Cheryl Blossom who wears to Gorgon’s mask of death to any enemy that crosses her path, and pity the fool that forgets that Hiram Lodge is not the seemingly genteel man he pretends to be either.

Fair warning: violence is no longer content to occupy the underbelly of Riverdale, it has seeped out into the open leaving festering wounds in its wake. Thus, Season 2 of RIVERDALE delivers dark of thrills, chills, and things that nightmares are made of. Plan your Wednesday nights at 9:00 p.m. accordingly.