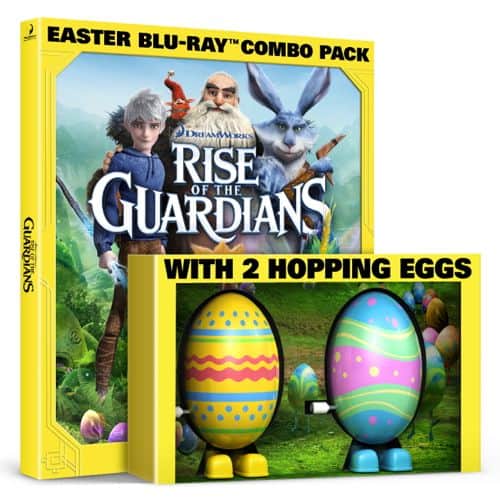 Seat42f and Paramount Home Entertainment have teamed up to give THREE lucky winners a copy of RISE OF THE GUARDIANS on BLURAY. For a chance to win leave a comment below telling us why you want to add RISE OF THE GUARDIANS to your BLURAY collection. Only one entry per person. Contest ends March 21st. Winners will be notified on March 22nd via email so make sure to use a valid email address when you post your comment.

Praised by critics and moviegoers of all ages, DreamWorks Animation SKG, Inc.’s (Nasdaq: DWA) spectacular and heartfelt adventure RISE OF THE GUARDIANS soars onto  Blu-ray, Blu-ray 3D™ and DVD on March 12, 2013.  Hailed as “brilliant” and “the best family film of the year” (Joel Amos, MovieFanatic.com) with “spellbinding power” (James Verniere, Boston Herald) and “dazzling animation” (Tom Long, Detroit News), RISE OF THE GUARDIANS received outstanding audience reactions and a coveted ‘A’ Cinemascore.  DreamWorks Animation’s newest animated adventure has captured the imagination of audiences worldwide with a fun-filled and magical story about the legendary guardians—Jack Frost, the Easter Bunny, Santa Claus, the Tooth Fairy and Sandman—together for the first time!  When the evil Pitch threatens to take over the world, it’s up to our beloved heroes to protect the hopes and dreams of children everywhere.  Filled with non-stop action and laughs, it’s a dazzling family film that’s being hailed as “an instant classic” (Nancy Jay, Daybreak USA).

Just in time for Easter, RISE OF THE GUARDIANS will be available in a Blu-ray + DVD + Digital Copy Pack with UltraViolet™ or single-disc DVD, each of which includes two delightful hopping toy eggs inspired by the ones seen in the film (while supplies last—quantities are limited).  The combo pack and single-disc DVD also include special features that take viewers behind-the-scenes to learn more about the magic used to bring the story to life.