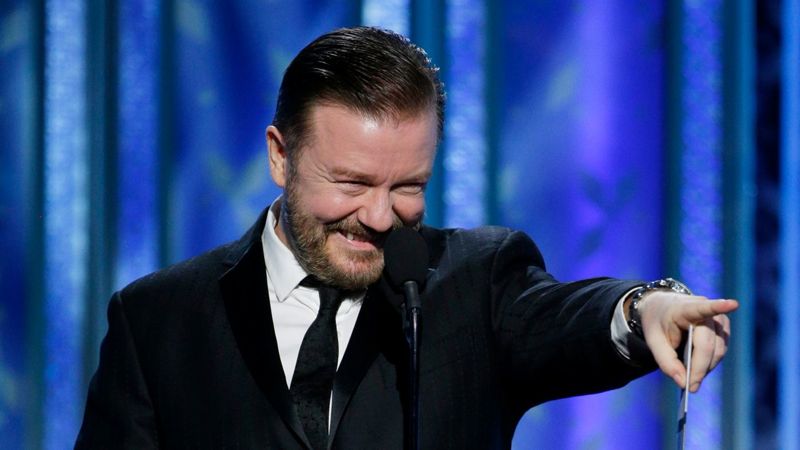 Returning to the same stage where he brought his acerbic sense of humor to Hollywood, Ricky Gervais has been named host of the “73rd Annual Golden Globe Awards®,” set for Jan. 10, 2016 at the Beverly Hilton Hotel.

The three-hour ceremony serves as the official kick-off to awards season and will be aired live coast to coast from 8-11 p.m. ET on NBC.

“We’re excited to have Ricky Gervais back to host the most enjoyable awards show of the season in his own inimitable way,” said NBC Entertainment Chairman Robert Greenblatt. ”Disarming and surprising, Ricky is ready to honor — and send up — the best work of the year in film and television. Fasten your seats belts.”

“Ricky Gervais left us with a lasting impression and we are thrilled to have him back in our show as we honor the best in film and television,” said Lorenzo Soria, President of the Hollywood Foreign Press Association®. “His off-the-cuff wit and quirky charm will surely have the room and audiences around the world at the edge of their seats.”

“What will he say? What will he do? We can’t wait to find out, and we are so happy that he’s back!,” said Barry Adelman, EVP, Television for dick clark productions and executive producer of the “73rd Annual Golden Globe Awards.”

A winner of seven BAFTA Awards, three Golden Globes and two Emmys, Gervais remains one of the most talented and respected comedian-actors working today. He created and currently stars in the Netflix series “Derek,” for which he has been Emmy nominated for two consecutive years.

Gervais first introduced himself to global audiences with his 2001 British TV hit “The Office,” in which he starred as his tragic creation, David Brent. “The Office” would soon become a wildly successful global format, including an Emmy-winning nine-season run on NBC. Gervais is about to continue “The Office” saga by directing his fourth Hollywood movie, “David Brent: Life on the Road. “

Following “The Office,” Gervais starred and created a string of HBO projects: “Extras,” “Life’s Too Short” and “The Ricky Gervais Show,” which was based on his record-breaking podcast that has been downloaded more than 500 million times. He has also guest-starred on many popular TV series, including “Curb Your Enthusiasm,” “Louie,” “Sesame Street,” “The Simpsons” and “Family Guy.”

On the film side, Gervais has co-starred in several features, including the “Night at the Museum” franchise, “Muppets Most Wanted,” “Ghost Town” and “The Invention of Lying,” and is currently putting final touches to “Special Correspondents,” which he wrote and co-directed.

As a stand-up comedian, Gervais has sold over 2 million tickets in arenas around the world. He is also the author of the popular children’s book series “Flanimals.”

Nominations for the Golden Globes will be announced Thursday, Dec. 10. Winners in 25 categories — 14 in film and 11 in television — are voted on by the Hollywood Foreign Press Association.

Produced by dick clark productions in association with the HFPA, the Golden Globe Awards are viewed in more than 210 countries worldwide and are one of the few awards ceremonies to include both motion picture and television achievements.