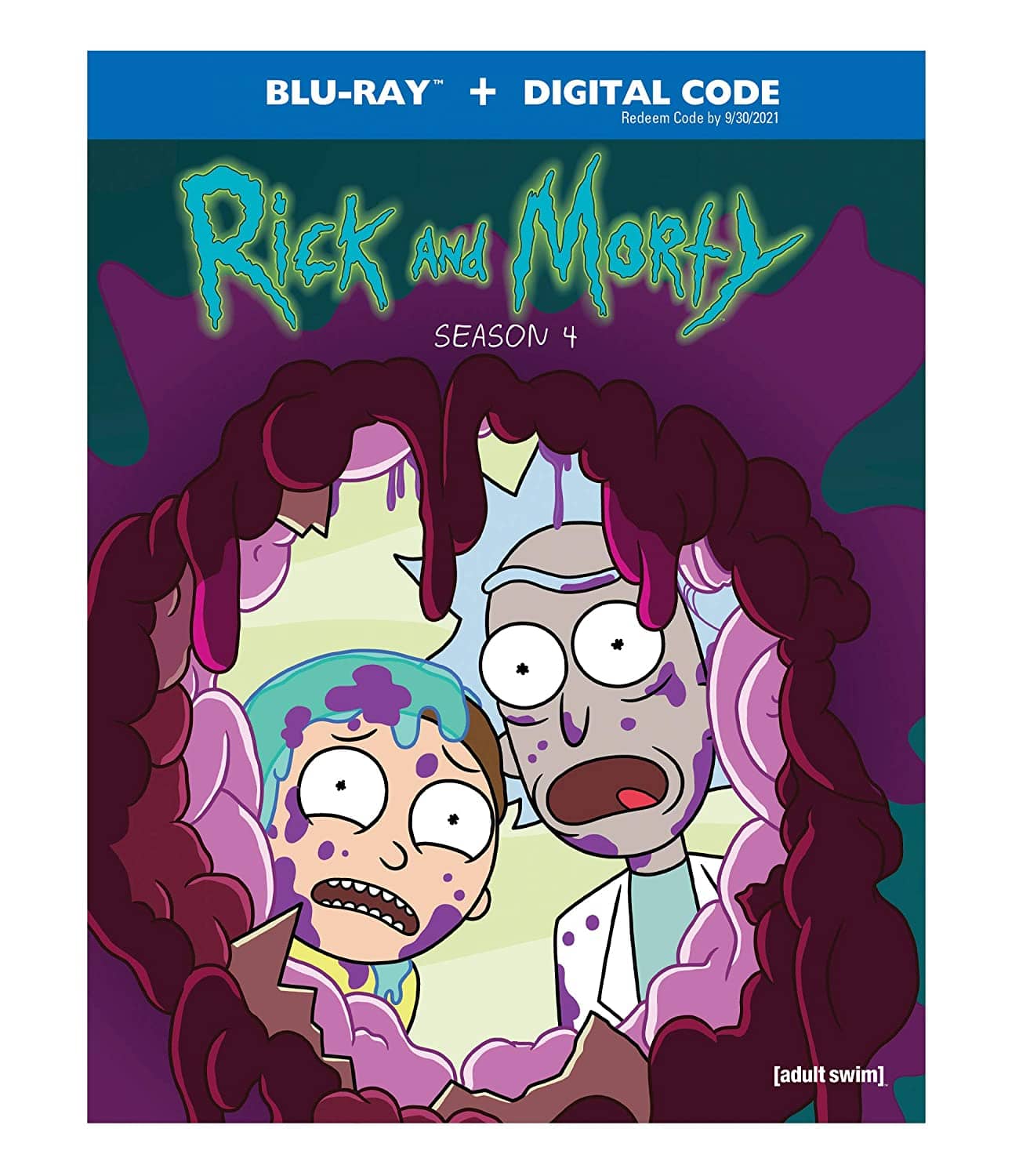 RICK AND MORTY: SEASON 4 has arrived! On Blu-ray and digital, that is, having aired a split season this past November/December and May. All ten episodes are part of the set, as well as roughly forty minutes of bonus features. Blu-ray purchases come with a digital code, and will be available on September 22nd.

The fourth season, which marks the start of a seven-season pick-up, gets weird, and that’s saying something for a show known to be weird. The writers have gotten very comfortable with pushing their bounds, and so now the weird seems more purposeful and thought out. Though it’s still extremely weird.

Perhaps the best example of that is the snake planet in “Rattlesnake Ricklactica.” There’s a time travel component, as well as parallel Earth history, as a world made up entirely of sentient snakes ventures out into the galaxy for the first time, and Morty (Justin Roiland) nearly ruins their evolutionary course. Then his grandfather and traveling companion, Rick (also Roiland), does ruin it for real in a delightful story that is part classic Star Trek, part Terminator, part a lot of other things, and gifts the world the musical stylings Snake Jazz.

The episode is far from alone in RICK AND MORTY: SEASON 4. Morty learns lessons about consequences and knowing the future. He also learns the follies of owning a dragon (Liam Cunningham, Game of Thrones). Rick has to fight to keep his personal toilet safe from an alien named Tony (Jeffrey Wright, Westworld). A story train plays with continuity and anthology, while a heist adventure gets meta times meta plus a bit more meta in a convoluted story knot that somehow kind of makes sense. “The Vat of Acid Episode” plays on an 80s trope, and so much more. Morty’s sister, Summer (Spencer Grammar), becomes ruler of a society. Morty’s father, Jerry (Chris Parnell), does, too, with predictably disastrous results. And matriarch Beth (Sarah Chalke) has to face what her father would like her to be.

That last hints just how much into the family drama and emotional heft RICKY AND MORTY: SEASON 4 can get. It’s a silly comedy, to be sure, but as the various personalities become more well-developed, more and more of the stories are driven by the relationships between characters. This is welcome and shows an appreciated maturation.

The special features are light and varied. The best one is probably the longest, a nearly-ten-minute look behind-the-scenes of the show as the crew finishes season 4 and begins season 5 simultaneously. It’s very easy, in a show as action-packed and fast-moving as RICK AND MORTY: SEASON 4, to just focus on the main threads and ignore the background. That feature, along with shorter focuses on a few individuals and parts of the process, help remind audiences just how much work goes into each episode. The sheer number of backgrounds and extra characters is mind-boggling, something other animated series don’t even come close to achieving, and will give greater understanding of what it takes to make a show this complex and good. Short bits on each episode are interesting, though not particularly eye-opening.

RICK AND MORTY is a solid show, and SEASON 4 continues this proud tradition. I look forward very much to at least six more years of a series, especially if it keeps building upon what it has done so far. Which is a lot.