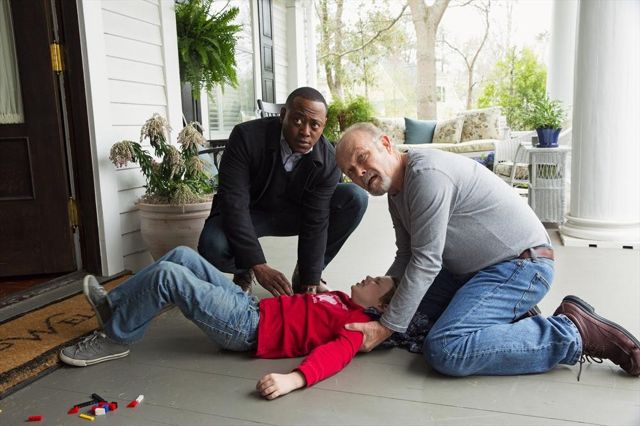 ABC’s latest high-concept sci-fi series is called RESURRECTION. Like so many failed shows before it, such as FlashForward, The Event, and The River, RESURRECTION tries to tell an intriguing mystery with a large cast, each drawn into the mythology in different ways. An unexplained phenomenon is at the heart of the show, and viewers are asked to ponder who is behind it and what it means.

After viewing the pilot, “The Returned,” I just can’t decide if I like RESURRECTION or not. Tonally and stylistically, it feels a lot like those quickly canceled shows I just mentioned, so maybe there’s an emotional resistance against getting too attached to a show that won’t last. Or maybe the cast, as capable as they seem, just aren’t compelling enough to really hook fans. Or it could be the writing, so vague that the mystery begins to feel like it’s laid out just for the sake of mystery, not with any real, complex plan behind it. Whatever the reason, I’m not sold.

RESURRECTION begins with a young boy named Jacob (Landon Gimenez) waking up in a rice patty in China. He is brought back to the United States, clearly being American, and placed in the custody of Agent J. Martin Bellamy (Omar Epps, House). Instead of turning Jacob over to child services, though, his description not matching any missing persons reported, Marty decides to take Jacob to where he claims home is – Arcadia, Missouri.

Arriving at the house Jacob directs Marty to, they meet Henry (Kurtwood Smith, That ‘70s Show) and Lucille Langston (Frances Fisher, Touch), whom Jacob calls ‘mommy’ and ‘daddy.’ The catch? Henry and Lucille’s eight-year-old son Jacob died more than three decades ago. How can this be him?

Thus, we’re launched into the story. A town still haunted by the death of Jacob and his aunt come face to face with the boy they thought lost, a miracle. All are affected by Jacob’s appearance including his uncle, Sherriff Fred Langston (Matt Craven, Justified), widower of the woman who died with Jacob, Jacob’s cousin, Maggie (Devin Kelley, Covert Affairs), a medical professional, and his childhood best friend, Pastor Tom Hale (Mark Hildreth, V). Another local woman, Elaine Richards (Samaire Armstrong, Dirty Sexy Money), is also part of the cast, but isn’t tied into things until the end of the hour.

The themes explored in “The Returned” include religion and belief, asking viewers to suspend reality in favor of a higher power. Since this is a TV show, the faith is likely only a cover for something more sinister, as other secrets, such as an affair, begin to be exposed, too. So I don’t think RESURRECTION is really going to commit to a god angle for their story.

The problem is, this all feels just a little forced, and motivations aren’t explored fully enough. Why does Marty go against the law and his job description to take Jacob home? It’s easy to see why Marty gets obsessed with the situation after arrival, but hard to understand why his boss might let him continue down this path. Some twists, such as the aforementioned affair, don’t really fit well enough to seem needed, bringing unnecessary drama to the proceedings.

How much of RESURRECTION will come across as phony and how much will follow the rules of the world they establish remains to be seen, “The Returned” being too murky in plot and characters to give us a clear understanding. Yet, the fact that the series does hesitate to explain itself in even the simplest terms makes it feel like there might be no explanation mapped out, meaning the show will meander and play with concepts it doesn’t have a goal of getting deep into. This is just a first impression, and few pilots are outstanding right out of the gate, so I will give it more than one chance.

The challenge RESURRECTION faces, though, is shows like this just don’t seem to work on the broadcast networks. Lost was a fluke and every new effort to recapture its magic falls flat. What’s to stop RESURRECTION from joining that junk heap? I haven’t seen many positive signs yet.