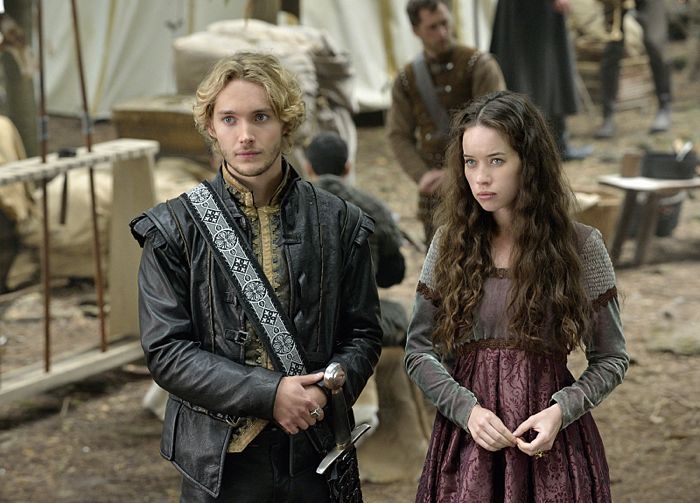 Whoever said it was good to be king has obviously never been in Francis’ shoes.  King Francis II (Toby Regbo) not only had to kill his own father to protect his kingdom and his wife Mary (Adelaide Kane) from King Henry’s (Alan VanSprang) descent into madness, he also just found out that he has fathered a child with his wife’s former lady-in-waiting Lola (Anna Popplewell).  Then only adding fuel to the fire, just as Francis was rushing to be with Lola as she was giving birth, the Black Plague strikes, which is where Season 1 left viewers hanging.

Season 2 picks up virtually on the heels of Season 1 following Francis’ hurried journey to be with Lola.  But the Black Plague has infected virtually everyone in the countryside surrounding the castle, all the villages and may have even snuck inside the castle walls before those large gates could be closed to prevent the infected from contaminating the entire French Court.

Just how safe is it for Mary, Catherine (Megan Follows), Bash (Torrance Coombs), Kenna (Caitlyn Stasey), Greer (Celina Sinden), and everyone else in the castle?  Well, let’s just say, even the mighty French castle walls cannot stop the Black Plague.  It will be a fight for them all just to survive.  And the biggest question of Season 2 will be:  who shall survive?  Be forewarned, a few familiar faces will not be spared.  The Black Plague does not discriminate between those of noble or royal blood, or those of political stature, or even those who may be loved and cherished.

The Black Plague is a blind killer.  It also does not help that there are those who might seek to use the convenient excuse of a plague to eliminate their enemies.  Just who might be so ruthless and heartless to take advantage of the chaos and confusion to kill off someone who has been plaguing them personally?  Such a villain is revealed and Mary is challenged to acquiesce to this diabolical plan or suffer the adverse consequences of not aligning with a very powerful political ally.

While Mary is placed in a position of peril and subject to extortion on the very first day she wears the French crown, Francis is having to make his own life and death decisions out of fear that he could lose his first child.  As if outracing a plague were not enough, Francis also has to weigh the options of whether it is wiser and safer for Lola and the child if he can smuggle them out of France and out of harm’s way.  The temptation is great and Francis struggles to weigh his personal desires against the better interests of his country.  Will the child ensure an heir to the throne or will it be a constant threat to the throne?  It is a heavy burden for a child to bear.

Mary and Francis are not the only ones torn and tormented during the outbreak, Bash and Kenna find themselves separated and tested as the plague circles closer and closer upon them.  Then Greer and Leith (Jonathan Keltz) also discover that they may soon be linked by marriage if Leith continues his pursuit of Lord Castleroy’s daughter, Yvette (Sarah Winter).  It is a position that they both find too close for comfort and Greer pleads with Leith to find another way to achieve his happiness in fortune for she fears she is not strong enough if faced with such close temptation.

Not to be left out of the drama, Nostradamus (Rossif Sutherland) chivalrously volunteers to put himself in harm’s way, believing himself to be immune to the Black Plague, and then does something that will continue to haunt him perhaps for the remainder of his days on Earth.

In the end, Season 2 of REIGN brings life and death circumstances to them all and will strike when you least expect it. There will be many prayers said to spare those so loved, but those pleas will fall on deaf ears.  So pray, pray and pray some more!  The Season 2 premiere airs Thursday, October 2nd at 9:00 p.m. on the CW.