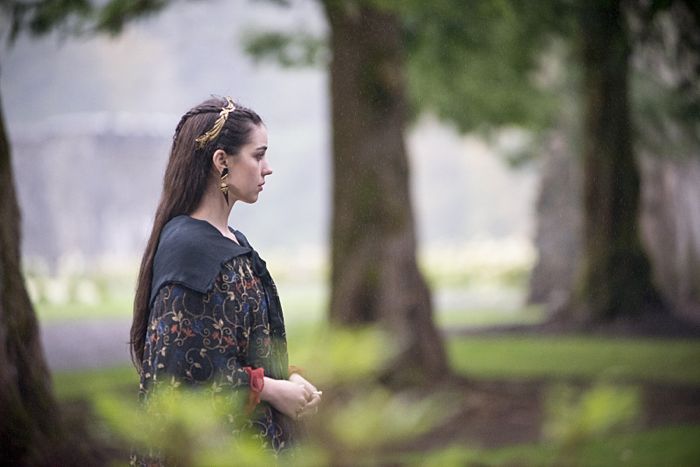 No matter which way you look at it, there is nothing good about a plague.  So as the Black Plague scours through France and is reaching for the French court, no one is safe.  Plagues kill regardless of the crown you may wear.

So with everyone’s lives on the line and no way to combat the plague, everyone must simply wait and see if they are among the lucky ones who survive — and even then, surviving a plague may be just the beginning as plagues lead to famine and famine leads to civil unrest.  A starving kingdom will revolt and everyone will be striking deals with their worst enemies in order to survive.

Season 2 of REIGN brings so many new threats to the new king and queen of France.  Did anyone actually believe that Francis and Mary’s time on the throne would be a conflict-free and trouble-free time?  Unfortunately, this is only the beginning of what they will have to face.

At a recent press screening, star Adelaide Kane and executive producer Laurie McCarthy talked about what Mary and Francis will face this season on REIGN:

The Black Plague
LAURIE:  The threat of this season is “what lies beyond the castle” and the power structure of France at that time is where the power really lies with the nobles. We just wanted to set up the complications on the road and the compromises that needed to be made. So I really wanted to do the plague as something more than “who is going to die and who is going to live.” I wanted it to be a launching pad for the framework for the environment that they would be living in.  There really is something to be said for people in power having lots of privileges and they also have the privilege of survival. I thought about it and for the most part it would be lower classes were thrown together and since it is an episode about contagion, those were the people that felt like they actually would die.
ADELAIDE:  Apparently, back in the day when the plague did come around — disease came around with alarming regularity — the whole court would pack up and move castles and wait it out.  Thousands of nobles would pack up and move.
LAURIE:  And when you go visit castles now days, there’s no furniture in them, because they would take the furniture with them.

Politics & Religious Tension
LAURIE:  The political side of that as well — we are slowing down the timeline and we’re focusing much more on France, specifically the region around the castle as a mini-ecosystem.
ADELAIDE: We’re focusing more on the religious tension at the time as well.  The Catholics versus the Protestants.  It’s kind of like watching the escalating violence during the time between the two factions.
LAURIE: It is a season of a young king finding his way and a young queen finding her way.

Mary & Francis’ Idealistic View of Ruling France
ADELAIDE:  They have an idealistic vision of how they want to rule and it is quite unrealistic. The way Henry and Catherine ruled was a mixture of bargaining and fear.
LAURIE:  Oppression.
ADELAIDE: I think fear was a large part because King Henry was so volatile and was seen as a very masculine, strong leader and you wouldn’t mess with him.  You wouldn’t because he’d split you down the middle in the throne room. But Francis, he’s approaching things very differently and it is going be seen as weakness. They are going to be seen as being weak because they are compassionate.  Whenever sovereignty changes over, there is always was a mad scramble to see who could gain from the instability while rule was changing over: How this new king will rule and how this new queen will rule? How can they be manipulated? How can I get power of them? Is there anything I have on them that I can use to improve my situation to gain more power, money or land for myself? It is just this giant, convoluted chess game.  It’s like every time the king switched over, the board was cleared and everyone had to start from scratch. There is a lot of maneuvering, which we are exploring this season.
LAURIE:  They are young rulers and people sense vulnerability.  Francis will go into it with the best of intentions, but he’s carrying a secret from the previous season and that is that he murdered the previous king. So that is gonna come back to haunt him.  It will play a role just as we are realizing how kind of intense the violence grows between the Protestants and the Catholics.  They have inherited a nation that turns out is on fire.

Be sure to catch the premiere of REIGN’s second season on Thursday, October 2nd at 9:00 p.m. on the CW.  Then be sure to come back and read the post-mortem on the events that transpired.  Secrets and seduction are on the agenda for Season 2.