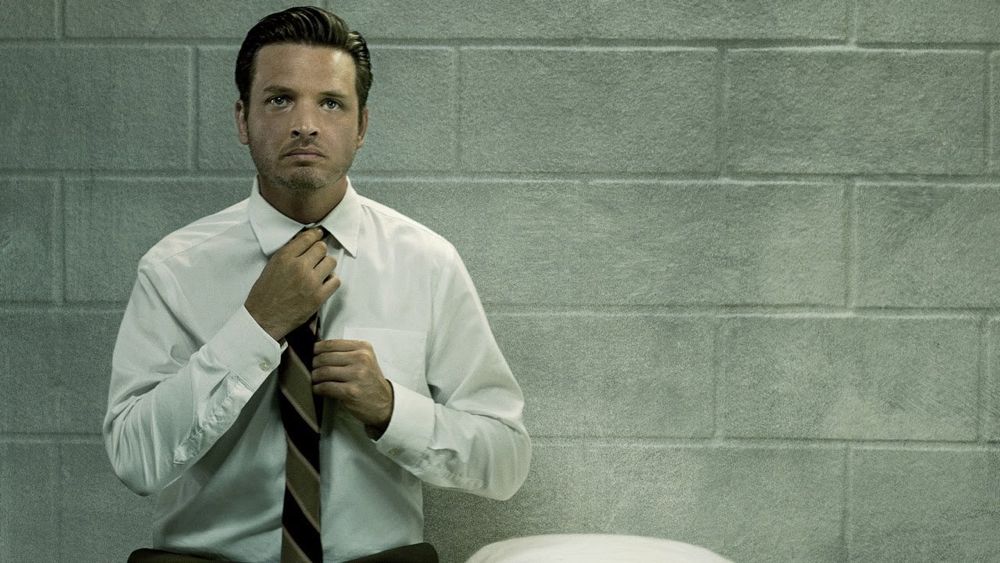 SundanceTV announced that the highly anticipated third season of its original drama “Rectify” will premiere Thursday, July 9th at 10:00pm ET/PT. The critically praised series, which was recently honored with the prestigious George Foster Peabody Award, was also cited by Entertainment Weekly as the #2 Television Show of 2014 and landed on over a dozen “Best of 2014” lists, including TIME, Los Angeles Times, Variety, Huffington Post, Vox,  Grantland and more.

Just in time for summer binge-watching, all 16 episodes from the past two seasons will be available for viewers to consume in advance of the season three premiere during “Binge on the Fourth of July: The ‘Rectify’ DVR Marathon,” which will begin Saturday, July 4th at 2:00pm ET/PT. The marathon will kick off with the series’ season one premiere followed by episodes airing back-to-back in order through the season two finale. In addition, AMC, SundanceTV’s sister network, will be running a late-night marathon of both seasons of “Rectify” during the week of June 15th, to encourage audiences to set their DVRs and provide them with another catch-up viewing option.

“Rectify” follows the life of Daniel Holden (Aden Young), who returns to his small hometown in Georgia after serving 19 years on death row. Having spent his entire adult life waiting to die, Daniel must now try to find a way to cope with his past and forge a “normal” life with a future before him. Daniel, who is still struggling with adapting to the routine aspects of modern life, affects everyone whom he comes in contact with from his very fractured family, to those working to protect him and those working against him on the side of law and order, and those in his hometown who never knew him, but now, upon his return, curiously seek complicated adult relationships with him.

“Congratulations to the ‘Rectify’ team, including Oscar®-winning showrunner Ray McKinnon, the terrific executive producers, and the wonderfully talented cast and crew, for continuing to deliver, by all accounts, one of the most riveting series on television,” said Charlie Collier, president of SundanceTV and AMC. “‘Rectify’ embodies what SundanceTV is all about – bold, intelligent storytelling at its finest – and it has never surprised any of us how deeply the show has resonated with critics and viewers alike. While ‘Rectify’ taps directly into a timeless, captivating theme – the question of guilt or innocence – to us, it is so much more: a coming-of-age story in a context so compelling. We’re looking forward to sharing season 3 with fans.”

Season three of the hour-long drama picks up immediately where season two left off, on the very afternoon of Daniel’s plea deal.  Will the deal be accepted?  Will Daniel be forced to leave town?  And when the body of a missing person is discovered, law enforcement once again turns to him for answers.  As Daniel’s devoted sister Amantha (Abigail Spencer) attempts to live her own life, she is given an opportunity at a local store that for the first time in a long time has nothing to do with her brother.  Meanwhile, Tawney (Adelaide Clemens) and Ted Jr. (Clayne Crawford) struggle to see if their marriage has a future by delving into their pasts for answers. Janet (J. Smith Cameron) and Ted Sr. (Bruce McKinnon), also under pressure from Daniel’s actions, will find that their marriage is put to the test as well.

“Rectify” was created and written by Writers Guild Award-nominated Ray McKinnon (writer and director of The Accountant; actor in “Deadwood,” “Sons of Anarchy”).  It is executive produced by McKinnon, as well as Mark Johnson and Melissa Bernstein, the award-winning producers behind AMC’s “Breaking Bad” and “Better Call Saul.”

“Rectify” stars Aden Young (Killer Elite, The Tree), recently nominated for a Critics’ Choice Television Award for Best Actor in a Drama Series for his role as Daniel Holden; Abigail Spencer (Cowboys and Aliens, “True Detective”) as Amantha Holden, Daniel’s younger sister who has devoted her entire adult life to securing his release; J. Smith-Cameron (“True Blood”, Margaret) as Janet Talbot, Daniel’s loving mother who has been living with the impending death of her son for 19 years; Luke Kirby (Take This Waltz, “Show Me A Hero”) as Jon Stern, Daniel’s lawyer who works for an organization dedicated to exonerating the wrongfully convicted; Clayne Crawford (A Walk to Remember, “24”) as Ted Talbot, Jr., Daniel’s stepbrother whom he had never previously met; Adelaide Clemens (Silent Hill: Revelation 3D, The Great Gatsby) as Tawney Talbot, Ted’s kind-hearted wife; Bruce McKinnon (Lawless, “The Wronged Man”) as Daniel’s stepfather Ted Sr.; and Jake Austin Walker (The Chaperone) as Daniel’s half-brother Jared.