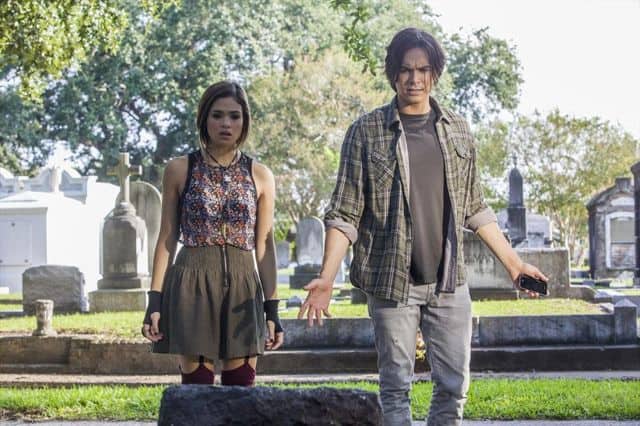 This week, ABC Family spins off its popular Pretty Little Liars with RAVENSWOOD. Set in a town with the same name as the show, Caleb Rivers (Tyler Blackburn) from PLL finds his face on a tombstone, as well as that of new friend Miranda Collins (Nicole Gale Anderson, Beauty and the Beast). This convinces him to stick around, at least long enough to get to the bottom of the mystery. That won’t be as easy and as quick as he might hope.

While PLL is a dark mystery teen drama grounded in reality, RAVENSWOOD is a dark mystery teen drama with supernatural elements, combining the elements that made PLL so popular and adding in the kind of stuff that has been hot in the young adult genre for awhile now. Teens like to be scared, and whether RAVENSWOOD just brings in ghosts or goes heavier, that’s definitely the goal.

Everything about the setting is designed to be overtly creepy, with lots of muted and washed out colors, graveyards and overgrown woods. Miranda’s Uncle Raymond (Steven Cabral, Roommate), whom Miranda and Caleb stay with, runs a funeral home, and looks as ghoulish as the bodies he takes care of as he skulks around. His household is maintained by Carla Grunwald (Meg Foster, briefly the Cagney or Cagney & Lacey), who speaks in a strangely quiet voice, purposefully intended to evoke shivers. And, of course, the building has no shower, making for a terrifying tub scene that will please young girls.

Except, it’s not really terrifying. The stakes appear to be low, with early frights being just that – frights. No actual peril or harm happens, even though there is opportunity for such. And throughout the first episode, this repeats many times, little bits of intense drama that add up to nothing.

Now, this is a show for teens, and ABC Family isn’t into lots of murder and gore. But these half-hearted, overly transparent attempts at horror are tame and lame. Given the ending of the episode, it doesn’t look like the network has ordered a series that has to hold back, so it’s a little puzzling why so much of the installment does so.

Speaking of the ending, of which I will spoil nothing, it’s huge and exciting, but not earned. There is too big a contrivance to set up the finale, and the stakes are not well enough established. It seems designed only to titillate viewers who might be considering not watching a second episode, rather than the direction the pilot should have gone in. I could see an episode later in the season ending this way in a satisfying manner, but the first episode jumps the gun in doing this now.

Backing up a bit, RAVENSWOOD seeks to establish a group of main characters to appeal to viewers, trying to cover the bases in putting together a typical ensemble. Caleb is well-known from the mothership, and Miranda’s description in materials as an “unconventional beauty” might be apt, but is definitely an archetype. The other main kids are also more a familiar role in this kind of group than a fully-thought out character, connected, often falsely, into an ensemble.

There’s Remy Beaumont (Britne Oldford, American Horror Story: Asylum), a newsman’s daughter who just happens to have the information Caleb and Miranda need to figure things out, or access to get said information. Her mother is also somehow connected to the larger arcs. Remy is dating Luke Matheson (Brett Dier, The L.A. Complex), whose father is dead. Remy’s father, and much of the town, suspects that Luke’s mother murdered him. Luke also has a sister, Olivia (Merritt Patterson), who is being unseated as the popular girl because of these events.

In RAVENSWOOD, as in many series of this type, the parents can be obstacles from time to time, but the action is centered on what the kids do, and they don’t confide the important stuff to the adults. Instead, they try to handle everything themselves and act grown up, which is far from unique to this series, but is a bit annoying from a believability factor. Especially when the mothers and fathers are actually part of the overall mystery.

RAVENSWOOD is a lot like other shows, in general, with few truly original things springing to mind from the pilot. Toss Sleepy Hollow, Pretty Little Liars, The Secret Circle, The Vampire Diaries, Buffy the Vampire Slayer, and others into a blender, and this is what comes out. Unfortunately, it’s so watered down by the familiar that it fails to really stand on its own.

Which will probably not stop the target audience from loving the heck out of it and following it as vehemently as they do PLL. I expect this show will do very well. I just won’t be watching it.

RAVENSWOOD premieres this Tuesday at 9 p.m. ET on ABC Family.