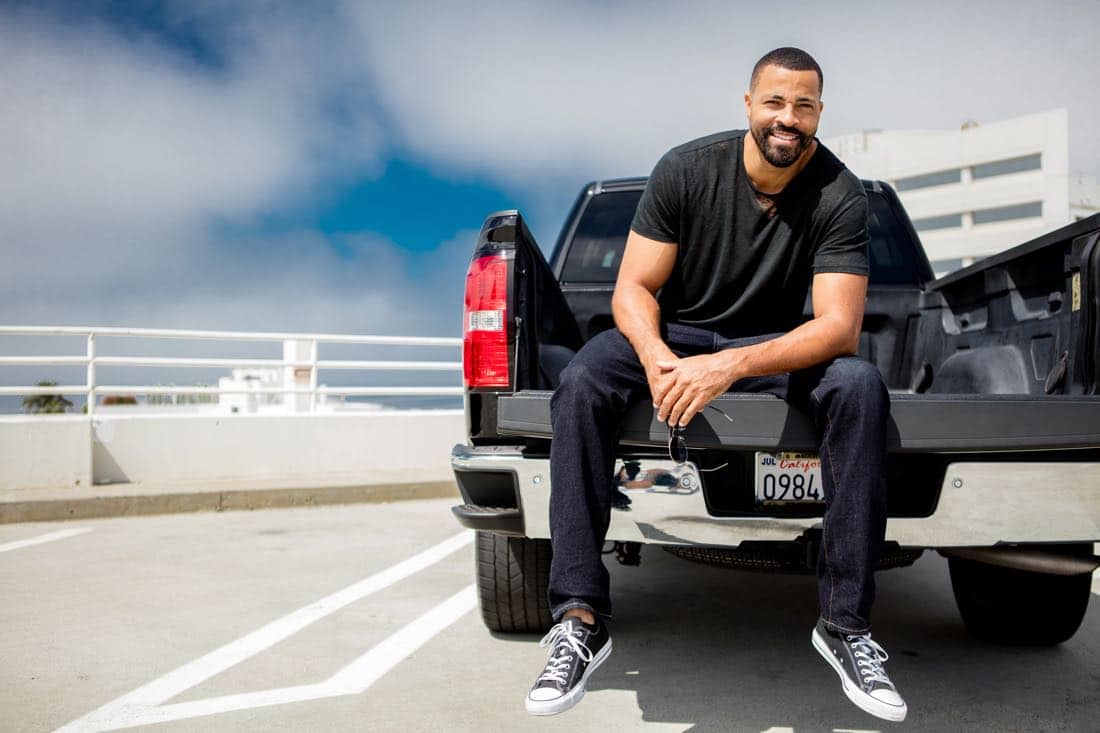 It takes a strong man to walk the fine line between characters who do bad things and characters who are inherently bad, and  and an even stronger actor to make the audience care along the way.  In his nuanced portrayal in QUEEN SUGAR, Timon Kyle Durrett draws viewers in to the complexity of the choices his character makes.  In our exclusive interview, Timon shares what continues to appeal to him about this role and personal joy and satisfaction he derives working on QUEEN SUGAR.

What initially appealed to you about the role of Davis West and working on QUEEN SUGAR?
Well, for one, I was thrilled by the thought of working with Oprah Winfrey and Ava DuVernay. I couldn’t think of too many opportunities that rivaled a chance to work with such an awesome tandem.  As far as Davis West goes, I liked that he’s a bit contentious.  In essence, Davis is the “Bad Guy.”  He creates that friction within the story that gets under the audience’s skin.  And I like being apart of that emotional wrenching.  I get to sink my teeth into his life, his psyche. I get to dig deep, see what makes this “bad guy” tick, and give that back to the audience.  It’s a lot of fun for me.

How would you describe who Davis is and his arc this season?
TIMON:  Davis is a determined athlete. He’s a guilt-ridden and remorseful husband. But above all else, Davis is a fierce and dedicated father, which eases him into a place of mending and maturation, in his own way.

What do you most admire and/or like about him?
TIMON:  Despite all his misdeeds and transgressions, he will do whatever he must to maintain a strong, loving bond with Micah. That’s his driving force, his fuel.  Also, Davis is no longer shrinking. He’s not afraid to stand his ground now.  Albeit a softened version of himself at times, and often with no support, Davis faces the music.

What is it like working alongside such a talented ensemble on QUEEN SUGAR?  Who do you get to work the most with?
TIMON:  I have such an affinity for everyone in the cast.  We’re like one big, happy family.  Literally.  Working with them is so inspiriting because they leave the set empty.  By that, I mean they give you everything they have while filming.  Everything!  One Hundred Percent!  That kind of focus, passion, dedication and energy fills me up and allows me to pour from my vessel, too.  Makes me step my game up, if you will.  Because of the storyline so far, I typically work with Dawn Lyen Gardner (Charley Bordelon-West) and Nicholas Ashe (Micah West) more than the other characters. But I’m looking forward to working with everyone more in the coming season(s).

Any favorite scenes that you got to work on so far?
TIMON:  My favorite scene from Season One was in Episode 6 (“As Promised,” directed by Tanya Hamilton), wherein Davis’ extramarital companion exposes their three-year “relationship” by way of a recorded phone conversation.  In Season Two, one of my favorite scenes is in Episode 8 (“Freedom’s Plow,” directed by Amanda Marsalis), wherein Micah finally tells Davis what really happened during his traumatizing encounter with the police in Episode One of Season Two.  Both scenes required a delving into real world emotions.  I drew from past experiences and dove in.  Each scene taught and changed me, as a person and as an actor.

What is your favorite part about working on the show?
TIMON:  I love the commitment of every single person.  Not just the actors, but also the entire Queen Sugar family.  The level of expertise and commitment I see each time I’m on set is such an inspiration.  Sometimes I just look around and think, “Man, look at what I’m a part of.”

What has been the one thing you as an actor have taken away from working on QUEEN SUGAR?
TIMON:  One of the things I’ve taken away from my Queen Sugar journey thus far is that I have to do my work: homework, self-work, workouts, etc.  Whatever work there is to be done, I do it.  But I also love the work.  Having the chance to hone in on my goal, which is to convey the truest portrayal that I can, is like catnip to me.  I dive into it.  I frolic in it.  I can’t get enough of it.  It feeds my spirit.  To me, that kind of work isn’t work.  I truly love it.

What do you hope viewers to take away from watching QUEEN SUGAR?

TIMON:  From the story, I hope viewers can see and embrace the beautifully diversified essences of life, love, hope, chance, fear, acceptance, family, pride, honor, and real history.  But from Queen Sugar phenomenon as a whole, I hope it is achingly obvious by now that Woman Can Do ANYTHING.  Period.

What is the biggest challenge working on QUEEN SUGAR?
TIMON:  My biggest challenge is not being on set.  Real talk, I think I’m addicted to the energy.  Sometimes on my days off, I’d just go to set just to be in that atmosphere.

What is the biggest surprise working on QUEEN SUGAR?
TIMON:  The biggest surprise to me is the love. I’ve worked on plenty of projects, but this one is something truly remarkable.  The love, energy, and all the other nuggets of good stuff just keep coming.  It’s awesome to get that all the time.

What has surprised you most about your career to date?
TIMON:  What has surprised me most is the overwhelming love and support I receive from the viewers.  And the diversity of the viewers has been staggering.  It feels great to be a part of something that is breaking down barriers and touching so many different lives.

At this stage of your career, what do you think you have learned from the amazing variety of roles and projects you have worked on?
TIMON:  I’ve learned to enjoy the ride and trust my instincts.  Being on set is collaborative, symbiotic.  So, I give genuinely.  And if what I do doesn’t work, I make the needed adjustment.  I’ve learned to accept that part, too.

What are the perks of where you are in your career right now?
TIMON:  Well, somehow, TSA lines at the airports have suddenly gotten a lot shorter for me.

If there was one role you would like to revisit, which would it be and why?
TIMON:  I can’t think of any roles that I would revisit.  Each role was special in its own way, and furthered my growth.  I like the path that I’ve led so far.  Not sure if I’d want to change it.

Do any of your characters and the situations they find themselves in ever leave a lasting impression on you?
TIMON:  Absolutely.  So far, Davis West is the best example.  The multitude of scenarios he’s been in thus far has been a great learning experience for me.  With all the directors being women, I’m often given a new lens with which to see my character.  This leads to my realization of how a similar, real life scenario could or would be like.  So, in doing my “work,” I’m also learning in real life.  That’s invaluable and incredible to me.

Has there been any great advice you have gotten?  What advice would you offer to other upcoming and aspiring actors?
TIMON:  I remember talking to Morris Chestnut while working on “Like Mike” (20th Century Fox, 2002).  “Just keep being you,” he said. “People like you as you are, so don’t try to be anything or anyone else…unless it’s on camera.”  That resonated with me.  Still does.  So I offer similar advice.  Do your best work while being your truest self.

Do you have any other upcoming projects that you can share that fans should keep an eye out for?
TIMON:  This question always makes me laugh because I’m never able to discuss the upcoming stuff due to confidentiality matters.   So, as I always say, stay tuned.

To see what comes next for Timon be sure to follow him on Twitter @TimonKDurrett, and then to find out what lies ahead for his character Davis West, look for the return of QUEEN SUGAR Season 2 on OWN. (As an additional treat, QUEEN SUGAR has been renewed for Season 3.)