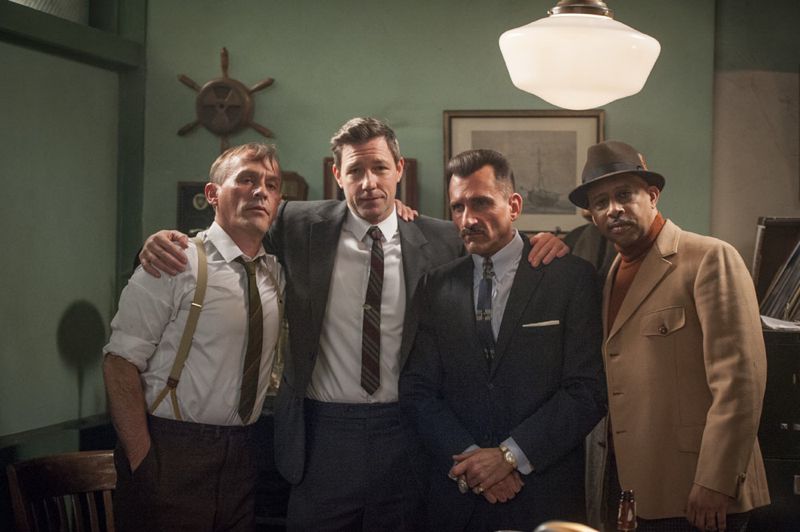 TNT goes in a bit of a different direction with PUBLIC MORALS. A 1960s-set crime drama from Edward Burns (Saving Private Ryan, The Brothers McMullen), it tells the tale of cops and robbers in New York City. It’s the Mad Men era, but this is the other side of the tracks, those lower income people who think the laws are guidelines, not hard and fast rules. Does the series work?

Well, at first I was taken aback by the style. It’s very specific and consistent, but comes across as cartoonish. I don’t necessarily think that’s a bad thing, though. After watching the pilot, it is clear that the characters and plot are in this same vein, so the costumes and set decoration match the tone that the series is going for well. While PUBLIC MORALS is a hyper reality, no one ever said every TV show must be totally grounded.

The main reason I quickly got over my hesitation and embraced PUBLIC MORALS is because of the cast. Burns not only writes and directs, but stars as Terry Muldoon, who isn’t in charge, but is definitely the most defined force in this world, feeling totally authentic for the piece. Burns has surrounded himself with an excellent ensemble including Michael Rapaport (Justified), Robert Knepper (Prison Break), Ruben Santiago-Hudson (Castle), Neal McDonough (Desperate Housewives), Brian Dennehy (First Blood), Elizabeth Masucci (Shame), Timothy Hutton (Leverage), Wass Stevens (The Wrestler), Katrina Bowden (30 Rock), and more. Many of these supporting players are doing some of the best work I’ve ever seen from them, and those that already have impressive resumes feel like they get this project and meld in seamlessly.

Together, they create a complex world that thrives on shades of gray. As Burns says to his son, the line between hero and asshole is a thin one, with the cops substituting the letter of the law for their own moral code, and working hand in hand with the bad guys when the bad guys stay in line. There are a number of differing relationships between the characters, and PUBLIC MORALS does a good job of painting its reality in just that first hour.

Once introduced to the status quo, the show also spends little time upheaving it. A new officer joins the plain clothes force, and it’s hard to tell if he’s going to be on board with their schemes or a hindrance. Someone who seems like a main character in this initial installment is killed off at the end, which will surely shake up several of the other players and provide a driving force through the season.

PUBLIC MORALS isn’t as brilliantly groundbreaking or as beautifully artistic of many of the cable shows on the air, and it feels a bit strange to be praising it, as those high-quality, original dramas make up much of what I gravitate towards. TNT doesn’t really have any of those, so that’s not surprising. Not everything that happens is realistic, and while some of the story is a slow boil, there’s a lot of fast talking and bits of action, too, so it never gets boring. True Detective or The Killing, this is not.

However, the program knows what it is and makes the best example of the genre that it can, and there’s a lot to be said for that. When coupled with magnetic personalities that suck the viewer right into the world, I find little to complain about. Honestly, I went into this expecting little, and now plan on setting a season pass on my TiVo because I really want to find out what happens next. That’s just about all I can ask for from a pilot, and I look forward to seeing what they do with the rest of the season.