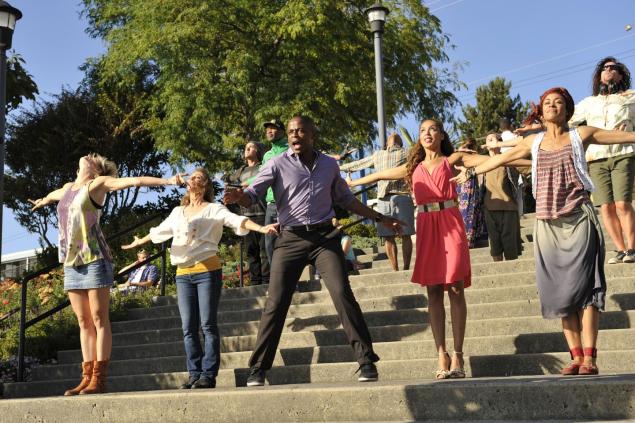 USA’s PSYCH has been off the air for far too long, and returns this weekend with “Psych the Musical.” In the two hour special, Shawn (James Roday) and the others attempt to bring to justice an escaped mental patient named Z (Anthony Rapp, Rent) who has a grudge against a certain theater company. An old foe returns to help, and demands singing and dancing as her price for information. Is all as it seems?

NOTICE: What follows contains some plot spoilers. I won’t ruin anything too big or what happens at the end (so nothing much more revealing than what’s already on IMDB), but if you’d rather not know anything ahead of time, you may want to wait to read this.

The biggest foe in PSYCH’s past is Yang (Ally Sheedy), the serial killer with a personal interest in Shawn. She is brought back out for “Psych the Musical,” allowing her to participate in a big episode. I feel like this is a pretty appropriate use of her. She should only return sparingly and with effect, and although she is not exactly the center of this story, she still plays a sizeable role, making her appearance worth it.

Mary Lightly (Jimmi Simpson) also comes back, but since he died during his last guest spot, I won’t go any further than to say he sings well and is brought in through a creative twist most should appreciate.

The premise of why PSYCH is doing a musical is thin. Yes, Yang demands that Shawn sing for her, but before that, the characters have already been crooning away, so it’s not just at Yang’s behest that the songs pour forth. Unlike Scrubs, which featured a patient who imagined her doctors singing, or Buffy the Vampire Slayer, where a demon cursed the cast to speak melodically, or Grey’s Anatomy, which had a story of hallucinations (all three terrific efforts), “Psych the Musical” is not so well thought out.

However, that’s kind of par for PSYCH. I love the series and all its references to pop culture, but it’s always been a series that doesn’t go deep. It’s much more focused on being funny than developing characters, and even though some wonderful arcs have snuck in, they are not the mission, making the show more enjoyable than high-quality. Believability has been stretched before to match a genre, so it’s in keeping with the usual tone that it happens again here.

“Psych the Musical” concerns a pretty typical case. While the run-time is two hours (including commercials), which allows space for musical breaks, the story itself is only an hour’s worth of mystery. The clues are typical, at best, and nothing particularly monumental happens. One wishes, especially with the inclusion of Yang and Mary, the writers had stretched themselves a little further, but oh, well, too late now.

The music itself is not bad. It’s campy and not particularly original, but that’s kind of the charm PSYCH seems to be going for. Although it was released that sixteen numbers were produced, many are repeats of an already-used tune, just with different lyrics. This isn’t necessarily a bad thing, just an observation that there truly isn’t as much variety as one might think.

Roday proves to be a more than capable singer, as does Dule Hill (Gus), who is light on his feet, as well, leading to a great, big opening. Gus also gets the finale to himself, which is a bit understated for my taste, not ending nearly as big as the episode starts. Lassiter (Timothy Omundson) is good on the base lines, and his harmonious sparring with Sharn are among the best moments of “Psych the Musical.” Juliet (Maggie Lawson) doesn’t seem particularly talented in this arena, but does a passable job when needed, and Vick’s (Kirsten Nelson) solo is brief, but effective. Woody (Kurt Fuller) is fantastic in his simple piece.

Henry (Corbin Bernsen) absolutely refuses to participate, which is in keeping with his character, so it works. Buzz (Sage Brocklebank) seems like he would really like to join in, but Lassie shuts him down repeatedly, again something that is appropriate for the part.

Z only has one number, which is disappointing, given Rapp’s resume. I understand the focus is on the main players, but when one casts a guest star of this pedigree for a musical, one should use him much more than PSYCH does. Even worse, Barry Bostwick (The Rocky Horror Picture Show) doesn’t get to sing at all. If that’s how “Psych the Musical” wants to use its guest stars, fine, but don’t bring in people viewers expect to hear if they’re going to be wasted.

Overall, I found “Psych the Musical” a middling effort. I was entertained, but wasn’t left desiring to download the music or listen to the songs again, as I have been after other shows’ attempts. I love musicals in general, so it’s a bit sad. But, the style of this installment is consistent with the rest of PSYCH, so on that count, it is decent.