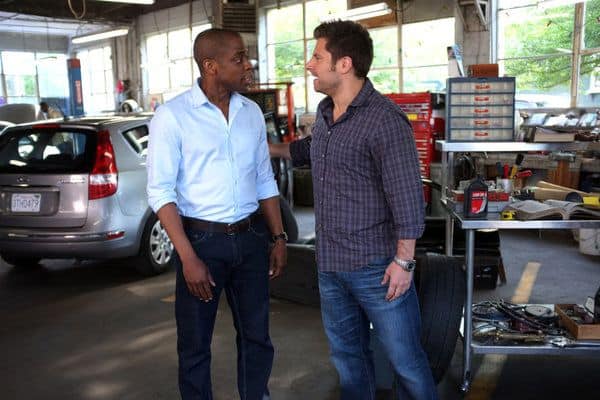 USA’s PSYCH picks up right where last year left off in the new season premiere, “Santabarbaratown 2.” Shawn (James Roday) vows to find Henry’s (Corbin Bernsen) shooter, even though Jules (Maggie Lawson) warns him that he’s too emotional to be part of the investigation. Emotional, he is, but he’s also still Shawn, which means he is the best chance of bringing the bad guy to justice.

Most of the time, on television, when the cops are after a perp, anyone who is too close to the case is promptly taken off the job. Sure, it’s practically a cliché at this point that the detective will still pursue whatever leads they can, and most likely catch the villain. But they are usually ordered to stay away, and they sometimes get in trouble for refusing to do so.

PSYCH breaks this streak when Karen (Kirsten Nelson) tells Shawn to go after Jerry (Max Gail), as the police don’t know where to look for him. From a storytelling perspective, this is great because it doesn’t do what everyone else does, and makes it a bit easier for Shawn to stay focused. From a realistic point of view, though, this may be campy, stretching things too far, as Karen couldn’t actually condone Shawn’s actions, even in the roundabout way that she does, and still be considered a smart boss. She has to know she’s setting up a potential disaster waiting to happen. She’s supposed to be a professional!

Henry, too, does the wrong thing, giving Shawn clues from his hospital bed. In Henry’s case, it’s a little more understandable because he has limited contact with the outside world, and Shawn may be the only person that he can pass what he knows onto. But why would Henry want to put his son in danger? Shawn may routinely work with law enforcement, but he doesn’t carry a gun, and he can’t be prepared for this.

Gus (Dule Hill) is worried about him, of course, but Gus also tries to beg out of helping Shawn with his task. Gus can be a wimp, but at a time when his friend really needs him, and this is that time, he should be able to man up. The fact that he does so only reluctantly, with the rules of an out being brought up repeatedly, is disappointing.

PSYCH is a comedy, so we know right from the start that “Santabarbaratown 2” won’t verge too darkly. Yet, we also see Shawn act in a manner he never has before. His jokes have a biting bitterness behind them, not usually present. He acts shaken, and his heart isn’t in being funny. He barely pretends to be a psychic when finding a secret room in Jerry’s house. He seems to crack the one-liners out of habit, or to ground himself, rather than to try to be funny for others, as he usually does. It’s a whole different way to see the character.

For a second, at the very beginning, Shawn really gets raw. Thinking his father might die, he says some deep words. Roday handles the moment fantastically, balancing Shawn’s personality with how anyone would feel in this situation. It’s weird for the role to go in this direction, but also satisfying when we see how much Henry’s injury affects Shawn.

Which is promptly ruined by Woody (Kurt Fuller), entering prematurely with a body bag. And it’s not the last time Woody, whom I normally love, screws up a scene this week.

This continues throughout the episode. For every time Shawn lets his anger out and wrecks Jerry’s house, he also sneaks into a gun club wearing half a fake beard. I understand the desire to keep the tone of the series faithful to the rest of the installments, but shooting Henry in the manner they did breaks that rule. While Shawn shows signs of being changed a bit, no one and nothing else matches this shift. I really wish they embraced the drama in “Santabarbaratown 2,” even if for only one hour.

The worst offense along these lines is bringing back Chelsea (Arden Myrin), Henry’s stalker ex-girlfriend, who stays by his side in the hospital. Even Henry can’t be allowed to wallow and reflect upon what has happened, being dragged into unnecessary punch lines.

The best part of the episode is when Lassiter (Timothy Omundson) helps Shawn. It’s not entirely unexpected, from glimpses we’ve been given of Lassiter’s depth before, and based on the circumstances, but it does make for some very enjoyable moments and terrific dialogue between the characters.

Though, why Lassiter only goes as far as he does, instead of helping finish the job, is confusing, and a bit of a plot hole, even if it gives Shawn the opportunity to confront Jerry himself.

As a PSYCH episode, “Santabarbaratown 2” is good, and ranks as average when held up against other installments. But compared to what it could have been, a brave, new choice that would let the actors and writers try something new, it’s a bit of a disappointment.