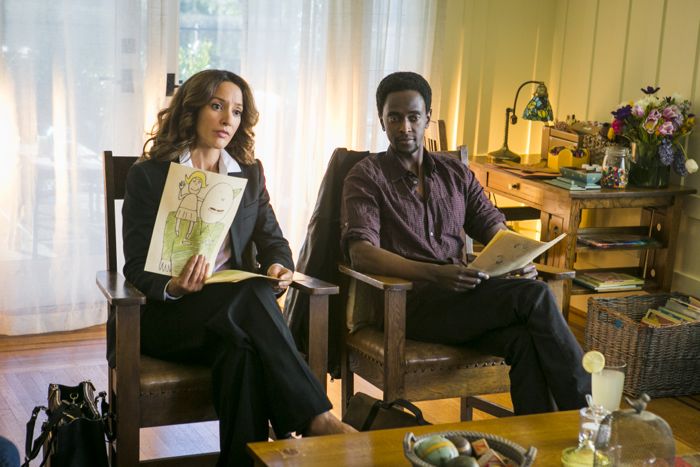 TNT’s newest drama is PROOF. Dr. Carolyn Tyler (Jennifer Beals, The L Word) is a respected surgeon who has had a near-death experience and lost her teenage son. She’s found a way to go on, putting thoughts of an afterlife out of her head, until she is approached to study what comes after living from a scientific perspective. She’s fundamentally opposed to what she considers a waste of time, but for the right reasons, can be persuaded to try to find PROOF of what happens to us.

The thing that gets a grounded person like Carolyn to look into this is a little girl. Well, that and her own experiences. When billionaire Ivan Turing (Matthew Modine, Weeds, Full Metal Jacket) proposes the idea, Carolyn is quick to shoot it down. But appearances aside, she’s not a heartless person, and she softens when confronted with a kid who has recently visited the “other place.” It’s a bit too cheesy and done-before an event, and it doesn’t exactly start the show off on the right foot.

Carolyn is not alone in her quest, of course. She has an assistant, young intern Dr. Zed (Edi Gathegi, House M.D.), who brings a more open mind, and Janel Ramey (Caroline Rose Kaplan), who works for Turing and so is probably a spy in her midst. That’s it for now, Carolyn embarrassed for anyone to know what she’s doing, but swayed by the extraordinary amount of money Turing is offering (which of course will be used for charity because television archetype heroes cannot be the least bit selfish).

But she has other things pulling her attention, too. Her boss, Dr. Oliver Stanton (Joe Morton, Scandal, Eureka), doesn’t know about her extra-curricular activity, nor does Carolyn want him to, though I doubt she’ll be able to hide it since she’s doing her research at the hospital. At home, she has a daughter, Sophie (Annie Thurman, Dark Skies), and spanning the two worlds, an ex-husband, Dr. Len Barliss (David Sutcliffe, Gilmore Girls). There’s also a man who claims to be in touch with the other side, Peter Van Owen (Callum Blue, Dead Like Me, Smallville), whom Carolyn (no surprise!) distrusts.

PROOF is an odd bird. It starts off with a very serial concept, the main character being tasked to find proof of life after death. The characters are decently well developed with some driving forces that would lend themselves well to an ongoing story. Yet, the way the first hour deals with a single patient indicates that it will be a repetitive procedural, Carolyn finding one person each week through which to continue her research, and the whole set up is rote. Doing this makes the program far less compelling.

If Carolyn ever solves the essential question at the heart of the series, it would be over. But I don’t think she will, which is disappointing, PROOF setting itself up for failure right from the beginning. No one knows what comes after death, and it’s unlikely that anyone ever will. Those who are spiritual enough to believe there is something don’t have a way to test that theory and report back on it, and anyone who thinks they do is considered to be on the fringe, possessing no concrete evidence. Yet, the pilot of PROOF, from the start, tells us there is more than life. So how can Carolyn’s project possibly end?

The idea at the heart of PROOF is an intriguing one and I like the pilot OK, I just have little confidence in this series going forward. The central premise is too flimsy and closed-ended, the procedural element is heavy, and the cast is just a bit too much structured like practically every other show in the genre, with no real surprises in the makeup. As such, I just don’t see this as a series to get excited about