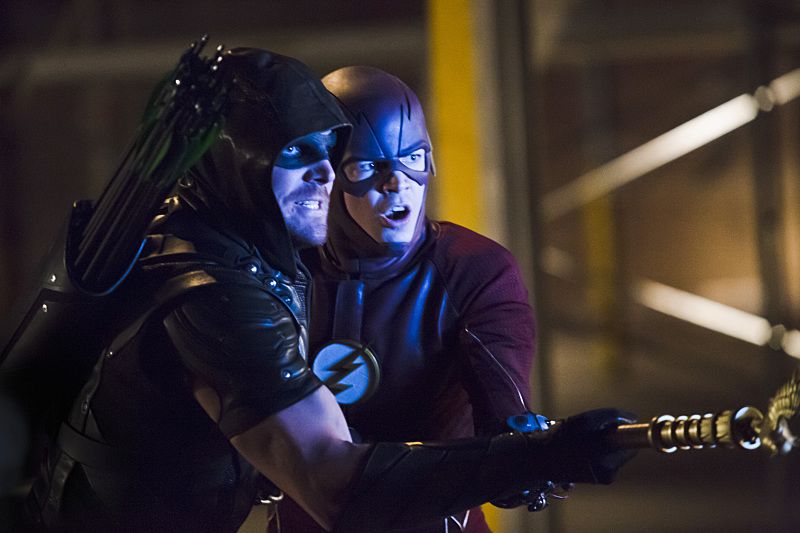 “Every day gets a little bit more normal.” Sorry, Cisco. Normal might be a ways off considering your ex­-girlfriend is a reincarnated warrior priestess.

THE FLASH and ARROW‘s two­-night, two­-hour crossover delivered dazzling dialogue, a great supervillain, some ancient flashbacks, a seriously injured Wells, Barry messing with time and major drama for Oliver. Yes, the former playboy finally found out he’s a father. When he spotted his ex-girlfriend Samantha with a kid, he quickly did the math and engineered a DNA test. Now he’s in a world of trouble because he promised Samantha he’d keep his newfound daddy status a secret…even from Felicity. Oh, Oliver.

What does this all mean? In a recent Q&A with the press, Team ARROW­verse convened to discuss what went down during “Legends of Today” and “Legends of “Yesterday.” The all­-star group included executive producers Greg Berlanti, Andrew Kreisberg, Marc Guggenheim and Wendy Mericle as well as actor Teddy Sears (Jay Garrick).

Some quick intel from this gathering:
­-You won’t see Vandal Savage again until DC’s LEGENDS OF TOMORROW.
­-There will be consequences to Barry’s changing time via his super speed
­-Reincarnation means you’re reborn as a baby. And then at some point in the ensuing lifetime there’s an awakening when all the memories return (which is what happened with Kendra)

8 More Things You Need to Know
#1 Oliver not telling Felicity about his son ­­ there will be consequences.

WENDY: It’s definitely going to come to a head in the middle of the season. Can’t tell you exactly how that’s gonna happen. But obviously for the arc of Oliver and Felicity’s relationship this season, the fact that he’s keeping this from her…true to what we’ve done on the show, if there’s a secret somewhere, it’s going to come out and it’s going to have some serious consequences. We’re really excited about how that’s going to change things and it’s really gonna raise the stakes and throw some wrenches into the works ­­ of their relationship ­­ which, so far this season, has been pretty smooth sailing. True to form, we’re gonna really mine that. There’ll be some fallout for both of them.

ANDREW: Well, if you’re a fan of the comics, you know that a big part of the comics is Velocity­9. And today you guys met Velocity­6. So it’s safe to say that there’ll be a few more iterations of that formula. How it plays out and how it works and who uses it and the effects that that have ­­ that’s something that you’ll have to watch.

TEDDY: Jay is still very dubious of Wells, and the carnage he’s created on Earth­2; just him being behind the particle accelerator explosion. There is a growing understanding, respect. There is a nice ­­ I don’t want to call it a shift, but these two will begin to work side­by­side, as members of Team S.T.A.R. Labs, going forward and fighting meta­humans. They’re not going to be buddies or great friends, but something does happen for the good after that.

TEDDY: He’s not jonesing for a fix or anything. But I think he’s aware of the potential Velocity 6 has on his life. But I also think he’s clear that, ‘I don’t want to go down that path.’ But I think like anyone who has seen the other side, there are haunting memories of what could be, and what could have been.

ANDREW: The two interesting things that are happening for Cisco is, one, a further exploration of his abilities as Vibe, and what he can do and what he’s capable of. The other thing ­­ which you got a little bit of a glimpse of in episode seven ­­ is his relationship with new Wells. That version of Wells did everything on his own. The Eobard Thawne version of Wells liked having a team, he liked having people around him, he liked cherry­picking the best [parts] of other people and using their knowledge. And did it in a way that made them all feel good about themselves. And this Wells thinks everyone else besides him is an idiot. And thinks everyone is a jerk. And is kind of horrible. And like Cisco said, he’s a dick; he doesn’t make any apologies for that. And so much of that is coming from Tom’s [Cavanagh] talent and imagination. And his willingness to play someone who is kind of unpleasant.

TEDDY: Some of my favorite scenes that are coming up—to watch, to be in the room and watch these guys work—are between Tom and Carlos (Valdes). I just think some of the stuff that they have, and sort of the shorthand they’ve developed as friends translate really, really wonderfully on camera, so there’s some really, really fun stuff between them coming up.

ANDREW: There’s a two­part episode, 13 and 14 this year, which I think is definitely the most fun pair of episodes that we’ve ever done, and has my favorite Cisco moment in the history of the series so far.

#6 Now that Kendra Saunders, Carter Hall and Vandal Savage have been introduced into the action, expect ARROW and THE FLASH to be less LEGENDary.

GREG: In fact, once LEGENDS is born in January, there’s really no intersection on the other shows. LEGENDS is kind of its own wacky, crazy kind of thing that allows for some fun surprises in terms of who may visit and how because they’re flying through the timeline and you’ll start to see more of that. But not on ARROW or FLASH.

MARC: He has a very clear plan and trajectory. The thing about Vandal is that for him a lifetime is an eye blink. He thinks in thousand­year­old terms. He’s a very much a master of the long con. Yes, he does have his own personal agenda vis a vis the Hawks. But he’s got much bigger plans for the world, which you’ll have to watch LEGENDS.

#8 Now that Damien Darhk’s had a brief brush with The Flash, might he take an interest in the speedster?

ANDREW: It was actually Marc’s idea.I was working on THE FLASH side of it and he was like, ‘Oh, Damien Darhk wants a chemical bomb for some reason.’ I was like, “Oh!’ We’re obviously all working on each other’s shows but this especially was a real sit down and collaboration…

WENDY: And Damien, he definitely has big plans. I don’t know if it will necessarily involve that bomb in particular but he’s got big plans for Star City so he…

ANDREW: He likes a good bomb. WENDY: Yeah, he does.