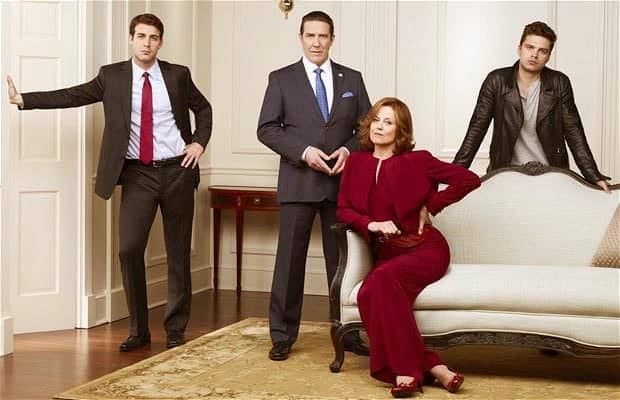 USA decided to take a risk with its new show, POLITICAL ANIMALS. The network has actually taken several risks in the last few years, each progressively braver than the one before it. There’s nothing wrong with how the network made its name, with a number of similar shows, each using the trademark formula. Still, it’s nice to see something new, and this show resembles its peers not at all.

POLITICAL ANIMALS is easily the biggest departure from USA’s tried and true formula yet, and it’s a big success, at least creatively. The writing is very smart, the acting is fantastic, and the scope is much broader than the average basic cable drama. The “Pilot,” which aired last night, is a superb story, wonderfully setting up each character, as well as telling a tale or two or three.

Created by Greg Berlanti (Brothers & Sisters, Everwood), many will immediately assume he is a fan of Hilary Clinton. That’s because the central character of POLITICAL ANIMALS, Elaine Barrish (Sigourney Weaver, Alien, Avatar), is a former first lady of the popular, two-term 42nd president, who, after losing a presidential race to a charismatic newcomer (Adrian Pasdar, Heroes, The Lying Game), accepts the position of Secretary of State. Elaine is bold, principled, and suddenly more popular than ever, hugely successful as the nation’s top diplomat.

But as the “Pilot” unfolds, it is clear that Hilary may just have been a starting point. There are definite differences. Some are cosmetic, such as the fact that Elaine has twin sons instead of a daughter, while others, including divorcing her husband, Bud (Ciaran Hinds, Rome, Munich), are perhaps wishful thinking. But what it really boils down to is that Hilary is a public figure, and none of us will ever know what goes inside of her head. Ellen is a television character, who will do things to keep the show interesting, such as sleeping with her ex-spouse. Not only that, but Elaine must be fully fleshed out, filling in those details missing from the general consciousness about Hilary. As such, a lot of creative license is taken, and the character will quickly stand apart from her inspiration.

A number of things happen in the “Pilot.” Firstly, the family celebrates the engagement of Elaine’s son, who happens to also be her chief of staff, Douglas (James Wolk, Happy Endings, You Again), to Anne Ogami (Brittany Ishibashi, Ghostfacers, Eagle Eye). It looks like the perfect pairing, and they do seem to get along pretty well, despite the family tensions. But Anne is secretly bulimic. Is this condition a result of the pressures of marrying into such a powerful family? What kind of girl chooses this kind of life? These are questions only barely begun to be explored.

Other son, Thomas James, or TJ (Sebastian Stan, Gossip Girl, Kings), is a homosexual with a drug problem. Having previously attempted suicide, he is not well suited to this particular family, finding the spotlight painful and grating. He is still loved, at least by his mother, but that isn’t enough to keep him in line. What kind of trouble will he cause her and the others?

In fact, TJ sets up the other major thread of POLITICAL ANIMALS. In the “Pilot,” Elaine is being followed around by a reporter named Susan Berg (Carla Gugino, Watchmen, Californication, Entourage) who made her name by exposing Bud’s cheating ways, and is now using the story of TJ’s screw up to blackmail her way into an interview. Of course, this being TV, Susan’s life is just as messed up, as her boyfriend / boss betrays her in more ways than one, and she begins to feel Elaine’s pain.

There is a very nice parallel between Elaine and Susan. They are similar types of women, to paraphrase the episodes, bitches who don’t like being called bitches. They are driven, intelligent, sexy, and get what they want through hard work and tenacity. Sometimes they may be shamed by others, but there is a lot to be admired in both women. And by the end of the “Pilot,” they begin to see that in each other, too.

In the first episode, amid all of this other stuff, there is also a hostage crisis in Iran, a great example of how POLITICAL ANIMALS mixes the big picture and the intimate family moments. This is a winning formula, showing how the people in charge cope with everything thrust upon them, a look that most people don’t generally get into their lives. Sure, the episodes will be trumped up for dramatic effect, but they also feel fairly real because the series gets the details right.

There are lots of things going on, but none of it feels rushed, especially in the hands of a terrific cast. These include supporting actors like Ellen Burstyn (Big Love, The Exorcist) as Elaine’s drunken mother, Dylan Baker (Damages, The Good Wife) as the Vice President, and Roger Bart (Desperate Housewives, The Producers) as the president’s chief of staff. All of this combines to make a fantastic show.

This is definitely a can’t-miss series of the summer, and presented as a limited run, it won’t be a major time commitment to check it out. POLITICAL ANIMALS airs Sundays at 10 p.m. ET on USA.