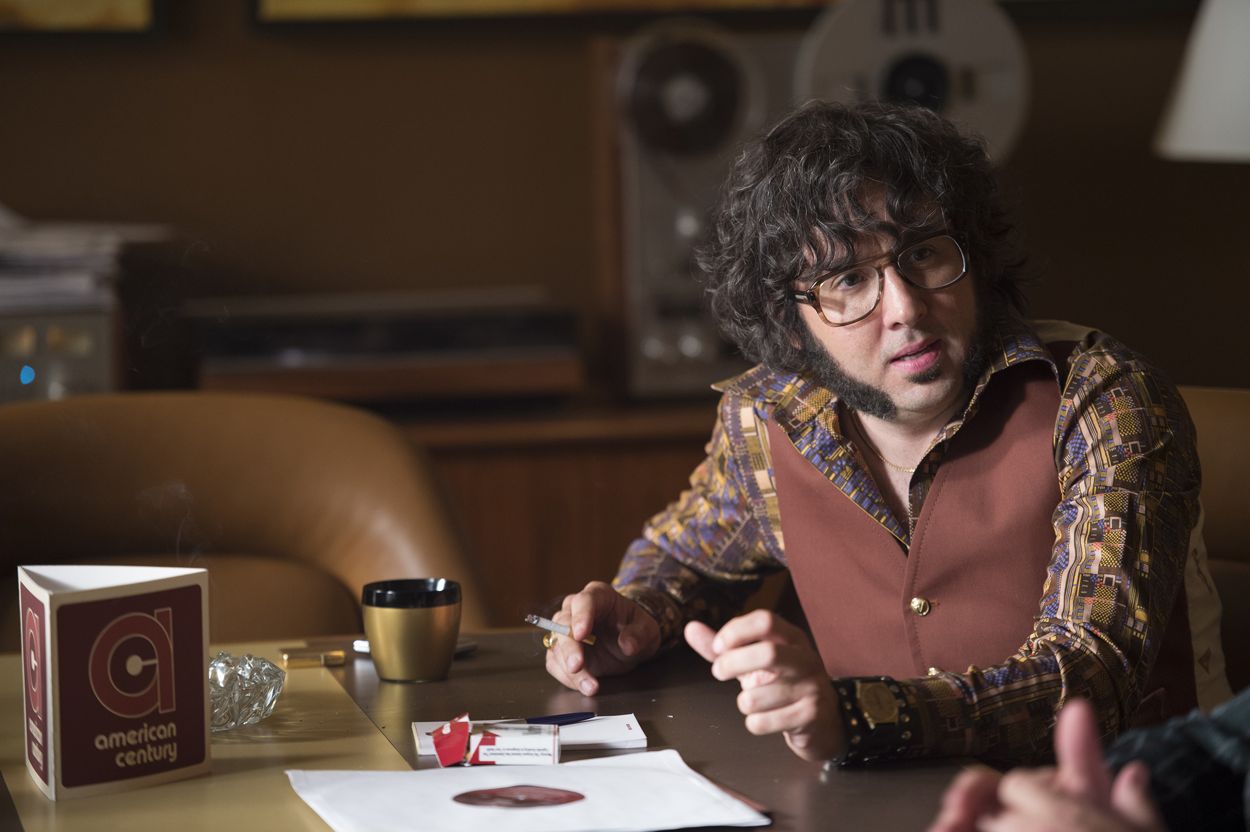 HBO’s latest hit series Vinyl comes with more than its share of prestige. The ’70s music drama comes from Martin Scorsese, Mick Jagger, and Terence Winter, three legends in the film world. With the show garnering rave reviews and a second season renewal, star PJ Byrne could not be more excited to be part of the project.

Byrne previously worked with Scorsese in the Academy Award Winning film The Wolf of Wall Street. For much of his career, Bryrne has been a character actor playing small, but memorable roles in films like Horrible Bosses and Dinner for Schmucks. As an actor who can be both incredibly funny and achingly real, Byrne fits right into the world of Vinyl as Scott, a lawyer who wants nothing more to break into the creative side of the field.

Byrne recently chatted with Seat42F about what motivates Scott, what fans can expect from Vinyl this season, whether or not his impressive facial hair was real, and much more.

This is your second time working with Martin Scorsese, what is it like to work with such a legendary director? Mick Jagger?

Byrne: It’s crazy. I didn’t think the day could be topped when my agent called me and said the great Martin Scorsese wants you to be in his movie. It was one of the greatest days of my life and when the legendary casting director Ellen Lewis came up to me at a party and said, “Hey, Marty’s doing a new TV show, he wants you to be in it” – that’s the day I started believing in unicorns. I was like, “Oh, so there are unicorns walking around here as well?”

And of course, you’re working with Mick Jagger as well.

Byrne: I put that in my contract. I have to work with a minimum of two icons. I need two icons before I show up on set, but then we have the great Terence Winter as well. So it’s like these three monsters that I get to go to work with every day. Mick Jagger is such a wealth of knowledge because he lived it, this time period, he lived it to the fullest and he knows the music intimately. Then Terry comes on and he brings his artistic talent to all of it and he takes what Mick and Marty are thinking and weaves it into such an incredible show.

How does the ’70s wardrobe help set the mood for the show?

Byrne: Ultimately, the incredible thing about that time period is the volume was turned up on everything from the music to the drugs to the clothing. I could literally, like, throw up on my shirt and wear it out and they would have been like, that’s a great choice. In particular with my character, I am the lawyer of the bunch so I’m not that cool. I’m not really supposed to be there. I don’t have any musical talent, I’m just there to control these musicians and lock them into contracts, so I overcompensate with my clothing. I’m always wearing the latest GQ outfit, some purple sweater vest with a sweater belt that’s really attached to it. Then my facial hair is so ridiculous with mutton chops. The mutton chops, honest to God, those are real — I really grew those.

Watching Vinyl feels like being transported to the ’70s. Does it feel like that for you guys on set as well?

Byrne: Oh totally. It’s funny, once you put those outfits on – and honestly, I have so much respect for women everywhere who wear high heels because I had to wear platform shoes and my feet were killing me at the end of the day. When we’re shooting we are sending through 1973 buses and cars and taxis and the set dressing changes. This little diner we were shooting on over in the Village looked like the ’70s, you honest to God walk into your trailer and it’s like a time machine because when you walk out again it is 1973.

How much will Vinyl’s plots continue to include real people from the ’70s cultural scene moving forward?

Byrne: I think it’s critical. Our storyline, what is happening with our record label is made up, but we’re doing a show about the ’70s and we are a record label. We are totally going to have to comment and interact with the huge acts of the time because we are a pretty substantial record label. It’s one of the feathers in the cap of the show. If you lived through the time period, you are like, “Oh my God! I remember that song!” If you were born after that time period and grew up in a different era, you will hopefully appreciate the artists that came through that time period because it was such a special time.

How would you describe your character, Scott?

Byrne: I think he likes power. I think he wants to be a rock star and have the world love him, but his field is not in music, in it is in the law. He can read a contract and probably read it better than anyone else in America, but the problem is when Scott opens his mouth, he is sort of super uncouth. The greatest thing for Scott is that he has the best teachers in Richie (Bobby Cannavale) and Zak (Ray Romano). He’s at a speed bump in his life. He’s trying to overcompensate when he opens his mouth. He’s trying to overcompensate when he wears his clothing and he screws that up and ultimately just looks ridiculous, and he’s trying to overcompensate with his facial hair. He just looks terrible. I think at some point he will figure it all out and he will be a force to be reckoned with.

There is something sad about Scott’s desire to move into A&R despite not having an ear for it. Is that something that will make him a tragic figure, or do you think it could make him dangerous to American Century in the long run?

Byrne: To be honest, isn’t it interesting if it is both? I think it is. As an audience member that is so much more interesting. I hope people will be sympathetic to my character because he does screw up a lot, and if you are sympathetic to it then that means I’m doing the right thing. I’m making the right choices for this guy because I’m showing you honestly who he is as a person. Everyone is afraid, and no one is ever super confident about what they are doing.

That also makes for a very scary guy because how long can he take it for? If you put a rat in a corner for so long, he’s going to eat his way through your stomach to get out, that kind of craziness. Sometimes he’s mean to the people below, sometimes he’s mean to the people above him. He’s scared shitless of the people below him and scared shitless of the people above him. He doesn’t know the right way yet. All he knows truly is the law and what works on paper. When you open your eyes and have to interact with the world, he hasn’t gotten that down yet.

Do you have a favorite scene or moment from the series so far?

Byrne: One was in the second episode where we rip Bobby’s character Richie out of the conference room and he says he’s not selling the company and he does this great monologue about rock and roll, and then he gets in a fight with us. I’ll never forget that day. We were shooting with Allen Coulter, one of our great directors, and we’re all getting a little tired, so Allen comes over and says, “Hey, Bobby, maybe on this take you want to take it down to 75% and save your voice because the camera is not on you.” I’ll never forget because Bobby looks over at us and he looks back at the director and he said, “We don’t know how to do 75%.” And I was just like, I love this! That’s our guy! That’s our leader!

There is a ton of drug use depicted on the show and you previously said crushed up Vitamin B is used in those scenes. Is that correct?

Byrne: You crush up Vitamin B and you snort it, it’s crazy. I’m sure it’s safe. My bones will be better. Anything you snort into your body, I’m like, do I feel a little energized? Maybe I’m just tricking my brain because I never did cocaine. You want anything you can use to get your head in it though.

Congratulations on the Season 2 renewal. What was your reaction when you heard the news?

Byrne: I love everybody I get to work with everyday. I love the writers and the creators, and just the actors and we got really close, really quickly. I’m sure people say that all the time, but they really got to feel like family. I’m so pumped to go back to work with these guys. I’m so proud of the work we are putting out.

Besides The Wolf of Wall Street, what is your favorite Scorsese film?

Byrne: That is so hard to say. You know what, I think Goodfellas because I was always a Joe Pesci fan and Marty told me Joe Pesci kind of riffed that line, “You think I’m a clown!” He kind of made that up because he saw that happen when he was growing up as a kid. So just the fact that I thought that movie was so scripted and everyone had to say their lines, and a lot of it was just them being loose and playing around. I grew up in an Italian family, and that movie just connected with me so hard.

Catch an all new episode of Vinyl Sunday at 9 p.m. on HBO.