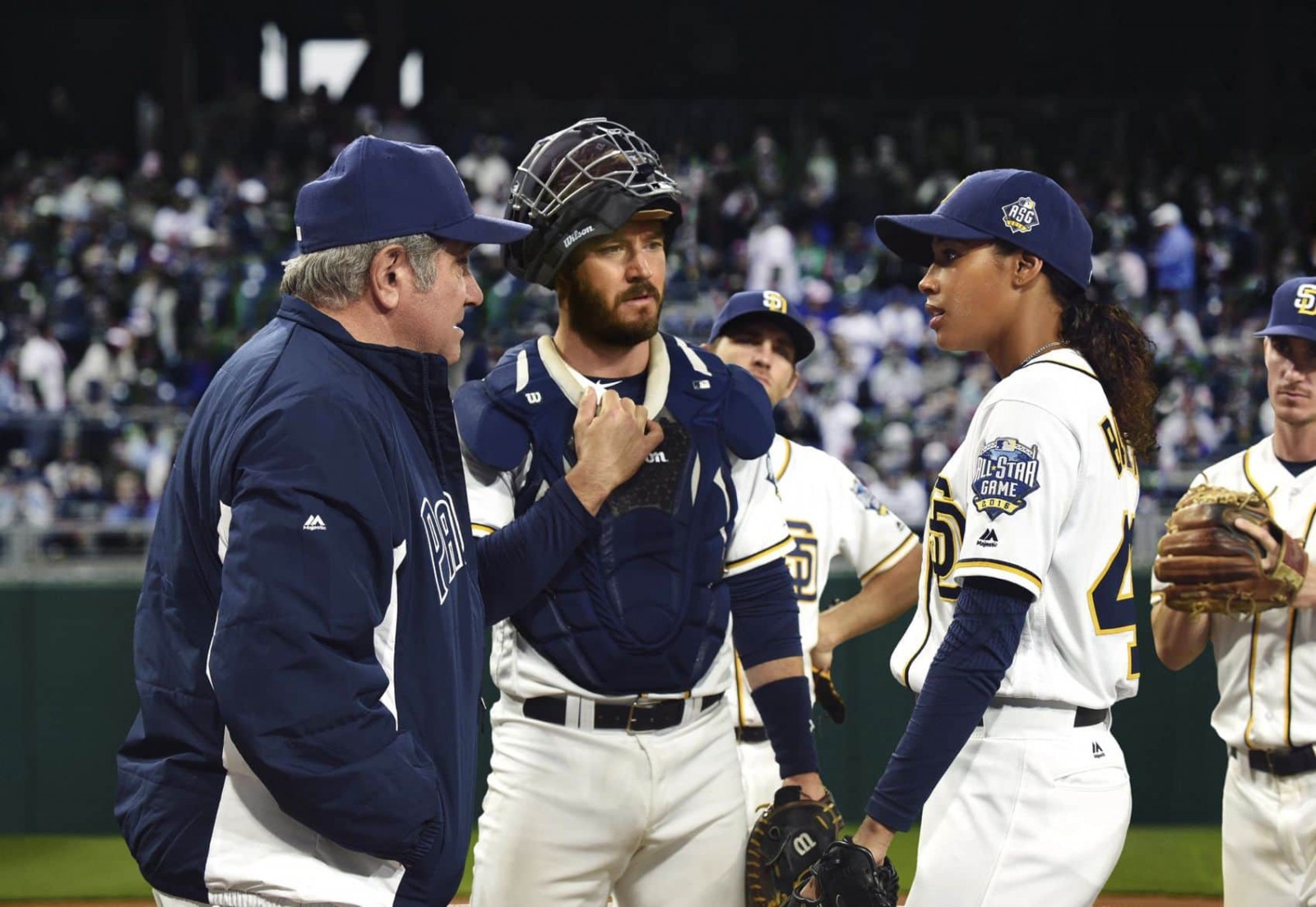 Disclaimer: This article is written by a non-sports fan. Nope, I don’t watch any of the sports.

FOX will be striking several chords with its new drama PITCH. It’s about the first woman in major league sports, as a girl becomes pitcher for the San Diego Padres. No, this is not a true story, and no, no woman has ever played for the MLB, NFL, NBA, or NHL (America’s four major professional sports leagues, according to Wikipedia; remember, I don’t follow sports), although the Padres are an actual team. But it feels like a true story, especially with the right to use actual logos, and hopefully reality will echo art in short order.

Ginny Baker (Kylie Bunbury, Twisted) always wanted to play baseball. She was great at it from a young age, and her father (Michael Beach, Sons of Anarchy) taught her how to compete with the boys. She finally earns her way into the minor leagues, and when an injury sidelines the Padres’ regular starter, she is called up to substitute in his steed.

Obviously, this is a huge weight to put on one woman, forced to represent her entire gender. The parallels are drawn between Ginny and Jackie Robinson, and PITCH portrays the sexism we’d all expect to happen right from the start. It’s easy to imagine all of the problems that would pop up when a woman finally makes that leap. PITCH gets a lot of them out of the way quickly, presumably so they can move onto other drama.

But PITCH isn’t just a preachy, big-picture show. Yes, showing a female in the big leagues is extremely important and long overdue. However, there is an actual woman for which this is happening, and a lot of the focus is on Ginny. We see how she handles things emotionally, and it feels authentic. Bunbury is terrific at making Ginny seem real, and as much as I feel her pain when she falls short, I also feel her pride when she succeeds, as we know she must.

In this way, PITCH is also a typical sports movie. Like many of the great films in the genre, it follows an underdog who overcomes adversity and naysayers to rise to the top of her game. This formula is incredibly familiar, and yet it rarely feels stale, even when the audience knows what to expect. Everyone likes to see sympathetic characters win, and Ginny fits that profile perfectly.

Now, while the pilot is wholly a typical sports movie, I’m assuming the series will be more of a soapy drama over time. I feel like there are already the makings of a romance between Ginny and Mike, and Oscar is definitely after Amelia. There will be ups and downs as the season unfolds, and while the games will probably frequently be shown, there’s also going to be plenty of character stuff.

I think PITCH will be good at that. The pilot was very strong, other than a scene in which Mike seems to play savior to Ginny, which I found a little patronizing, but also kind of necessary to the plot. If it can avoid those, and it did for the rest of the hour, I think PITCH could definitely be a series worth watching. Though I think it’s too soon to crown it, as some already have, the next Friday Night Lights, which remains the definitive TV sports drama of our time.