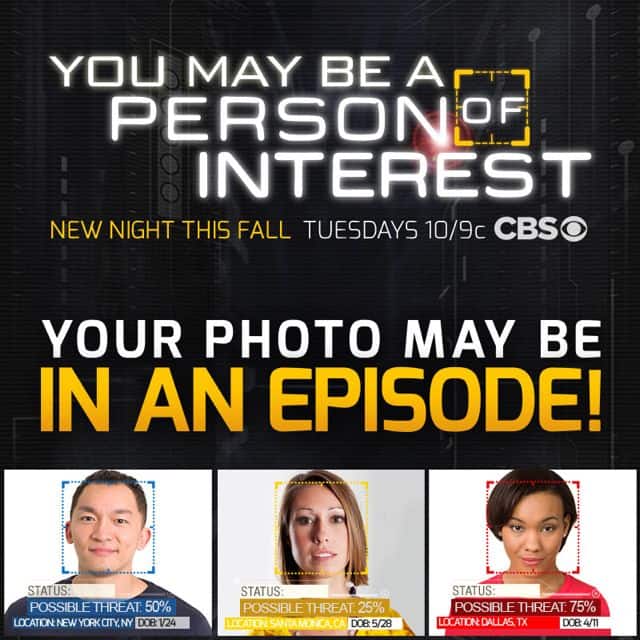 At the end of the second season of Person of Interest, The Machine managed to move itself — with its whereabouts presently unknown. A week before the hit series returns for its third season on September 24 on a new day and time — Tuesdays at 10/9c on CBS — fans will discover The Machine is much closer than they imagined, as The Machine infiltrates Facebook!

Starting Tuesday, September 17, fans of the hit CBS surveillance drama from Warner Bros. Television and J.J. Abrams’ Bad Robot Productions will be given the opportunity to become a “person of interest” through an integrated social photo app on the show’s Facebook page at www.facebook.com/PersonOfInterestCBS — and potentially have their likeness used in an upcoming episode of the show.

YOU MAY BE A PERSON OF INTEREST

As first alluded to at Comic-Con by the minds behind The Machine — executive producers Jonathan Nolan and Greg Plageman — the “You May Be a Person of Interest” Facebook App will allow fans to submit a photo of themselves through their own Facebook page, with the possibility of their image being included in the show during an upcoming episode.

When fans launch the “You May Be a Person of Interest” Facebook app, they will then be able to submit and edit an image of themselves from their own Facebook account. Fans will be able to choose from a selection of effects to enhance their images, and The Machine will then add information such as location and threat level. Fans can post their Machine photo on their wall or share it with friends. They will also have the opportunity to submit the image to POI producers at Warner Bros. Television and possibly be seen in an upcoming episode.

POI producers will review submitted photos and select images for use during upcoming episodes of the show, continuing throughout the entire third season. Photos could appear at any time … in any place … in any episode.

For more information on the possibility of becoming a “person of interest,” fans should visit the Person of Interest Facebook page at www.facebook.com/PersonOfInterestCBS to access the app.