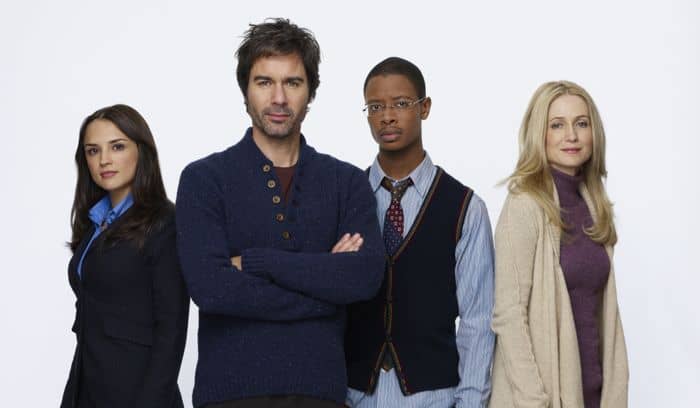 Reality is a figment of your imagination. These words are spoken early on in the “Pilot” of TNT’s PERCEPTION, premiering tonight. This statement is important, because much of this crime drama is about reality, and how things are seen. What is real? What isn’t? What is important in solving the case, and what is superfluous? All of these questions crop up, and will continue to drive the show going forward.

PERCEPTION is an hour long, case-of-the-week, crime procedural. Normally, this would be a recipe to write it off. However, it is also a series that questions how the human brain works, and the limit of the organ. There are deeper mysteries present besides who committed the murder, and if they continue to be explored, as they are somewhat in the “Pilot,” there will definitely be something worth watching here.

It certainly doesn’t hurt that the man in the center of PERCEPTION, Dr. Daniel Pierce, is played by Eric McCormack (Will & Grace). McCormack is great at capturing the various nuances of the character, a college professor who assists the F.B.I. Pierce is comfortable while lecturing and when at home watching the Cubs, but nervously twitching nearly everywhere else. It’s the details, though, that make Pierce come alive, crazy enough to be believable as a genius with mental issues, but with just enough sanity to justify how he functions in the world. McCormack does a masterful job in the role.

In the first episode, in a total Indiana Jones moment, Daniel has the added challenge of dealing with a student’s attraction to him. While he is definitely tempted by her, and has no problem saying so, he turns her down in a publicly embarrassing way. This says something about Daniel as a person. He is simultaneously extremely perceptive and oblivious, with his brain activity focused, rather than meandering. It also adds a bit of edgy, but not too edgy, humor that fits well within TNT’s brand.

Pierce is assisted by Max Lewicki (Arjay Smith, The Journey of Allen Strange) and Natalie Vincent (Kelly Rowan, The O.C.). One is a grad student who assists Daniel in everyday tasks, such as organizing his crossword puzzles and making sure that he eats. The other concentrates more on Daniel’s mental health, talking through problems with him, and helping him realize important things about himself. Oh, and one of these people is a figment of Daniel’s imagination, which, after the reveal, will make viewers constantly question what is real and what isn’t.

The crime element comes into play when Daniel’s former student, Kate Moretti (Rachel Leigh Cook, Psych, She’s All That), gets a demotion which places her back in Chicago. Having formerly worked with Daniel in the past, which is probably why she is so lax about the rules, and is kicked back down in the first place, she calls upon his services again. Together, they make a great team, both contributing to solve the case.

The case in the “Pilot” involves faking a drug trial. It’s hard not to notice the political overtones, with Daniel (and, presumably, the show’s writers) against the government and the pharmaceuticals industry. This is a stance that will appeal to most Americans, and is a safe move. The later dig on President Bush may alienate some conservatives, but probably not the people who would tune in to PERCEPTION in any great numbers anyway, considering the intellectual bend of the premise. The episode’s late attempt to balance by showing a brief clip of Clinton does not assuage, and only makes the stunt more obvious.

PERCEPTION is not without its predictability. There are plenty of hints as to the character that isn’t actually there before the camera reveals who it is at the end of the “Pilot.” Also, the story does flow along in pretty much an expected manner, familiar to those who spend lots of time watching detectives on TV.

But overall, the fantastic performances, including LeVar Burton (Star Trek: The Next Generation) as Daniel’s dean, and exploration of the brain will keep fans entertained enough to stick with the show. Let’s hope that PERCEPTION lasts longer than McCormack’s previous project with the network, Trust Me, which was really good, but canceled quickly.

Check out PERCEPTION, Mondays at 10 p.m. ET on TNT.