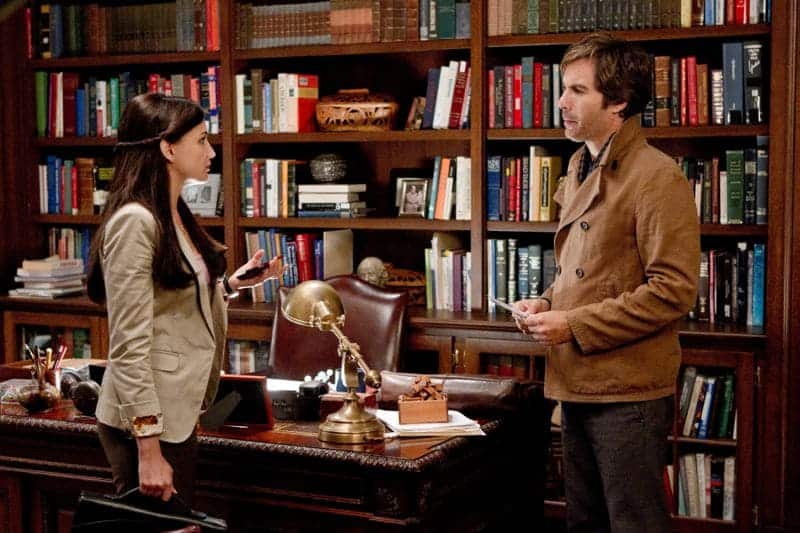 TNT’s PERCEPTION picks up months after the previous season in this week’s sophomore premiere, “Ch-Ch-Changes.” Daniel Pierce (Erick McCormack) is seemingly stable and healthy, having found a medication regime that works for him, and his life is moving on. Which is why he feels strong enough to assist the F.B.I. again when Kate (Rachael Leigh Cook) asks him for help.

In fact, Daniel is more confident and sure of himself than we’ve practically ever seen him. Daniel is a very intelligent person and knows it, but he is willing to push his ideas a lot further this year, especially when Kate’s almost-ex-husband and new boss, Donnie (Scott Wolf, V, Everwood), tries to manipulate the evidence of a court case.

I don’t buy that Donnie and Kate were ever a couple. Donnie’s personality is awful, and that’s immediately apparent. To think that Kate found redeeming qualities in this man for any length of time, let alone enough to marry him, is unthinkable based on her characters that have been established. Sure, Donnie brings some interesting conflict to the series, but the inconsistency in the back story ruins his presence. Why force the history?

The source of Daniel’s happiness comes from his secret relationship with Dr. Caroline Newsome (Kelly Rowan). Previously his psychiatrist and the same woman, sort of, Daniel hallucinates a long-term relationship with, Caroline isn’t completely comfortable with the time they are spending together and the “great” sex they are having. But Daniel doesn’t worry about that, delighting in just being happy and being with a woman that is real.

Or is she? It is not spoiling anything to say Caroline’s existence in Daniel’s company is immediately suspect. After all, PERCEPTION has established a pattern of what Daniel experiences not necessarily being real. And by keeping Caroline separate, away from the other people in Daniel’s life, there is no definitive proof that she exists one way or the other. “Ch-Ch-Changes” leaves viewers guessing for most of the hour, and I won’t say what the result is here.

I will say that, Caroline aside, it doesn’t take long for Daniel’s paranoid schizophrenia symptoms to rear their head. His hand shakes; he hallucinates a patient. Daniel will never be completely stable because that would ruin the conceit of PERCEPTION. It’s just a little sad, for those sympathetic with the character, to see he isn’t doing as well as he thinks he is.

Thankfully, Daniel still has friends, which will provide a support system no matter what might be going on inside of his mind. Kate is closest to him, of course, valuing Daniel’s rare talents. But we also have Lewicki (Arjay Smith), Daniel’s care giver, and Dean Haley (LeVar Burton), Daniel’s boss and old friend, who aren’t on screen nearly enough, but it’s always great when they are. With this layer of protection around Daniel, no matter how crazy he gets, he’ll still have those that look out for him and help him to maintain his life.

The ongoing plot concerning Daniel’s mental illness is an intriguing one. I love how the writers play with fan’s minds, and McCormack delivers a memorable, amazing performance in the role. I wish that this was what the series was actually about, because any time this arc takes center stage, the show gets really, really good.

Unfortunately, TNT doesn’t usually do serial, and the main meat of this episode, as well as all but one of the first season’s episodes, is about a specific case that Daniel works on. The self-contained story this week isn’t bad, and there are some triumphant moments for Daniel, but it just pales in comparison to how well done the other scenes are. PERCEPTION is an example of a wonderful idea mostly squandered.