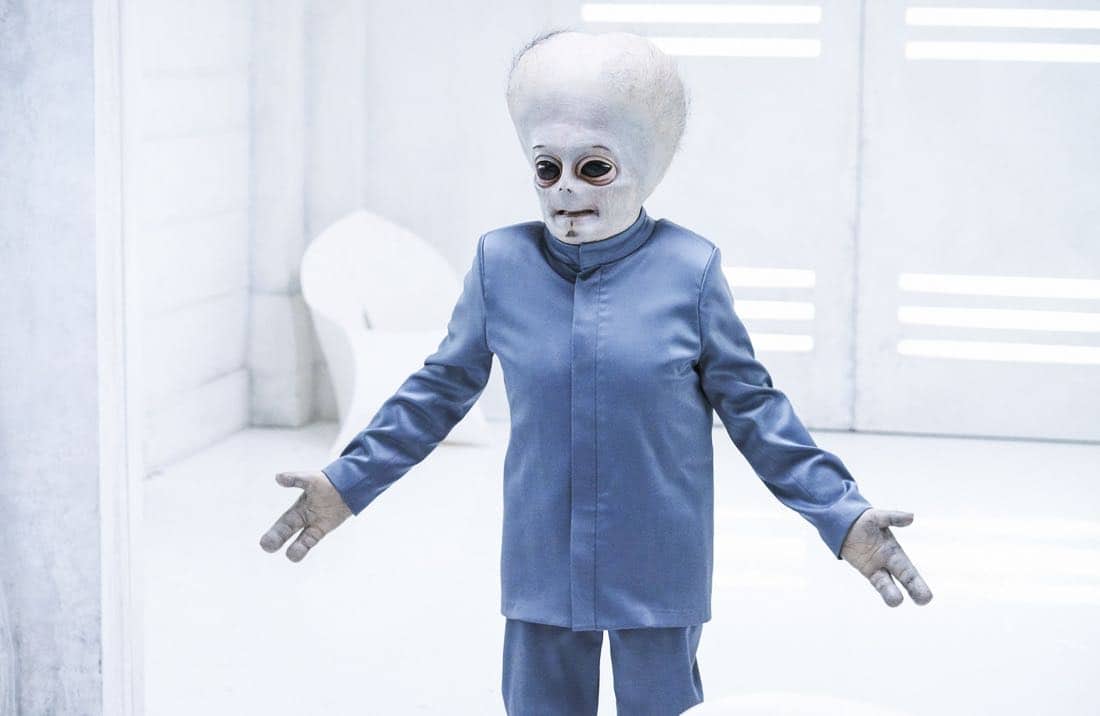 Given the role of a lifetime, Ken Hall is living his ultimate dream. Ken currently portrays the man behind the mask as Jeff the Grey in TBS’ PEOPLE OF EARTH — a role that has enamored fans and captured critical acclaim with his delightful delivery. In an exclusive interview, Ken talks about his love of working on PEOPLE OF EARTH, as well as the life lessons and professional lessons he has learned along the way.

How would you describe who Jeff the Grey is and his arc this season?
KEN: Jeff is a complicated character. He has a heart, but it’s often hid behind a vengeful visage. He can love and hate simultaneously and I think he wants to find his place in the universe while at the same time being recognized for his efforts and work as it relates to the mission. Jeff has had such an interesting journey this season. He was initially surprised by new management and a new boss in which they never saw eye to eye on. Over the course of the season, it becomes apparent that his new boss Eric the Cube greatly dislikes Jeff and finds every opportunity to demean and undermine him. Feeling alone, he has the great fortune of Kurt returning from the dead. Jeff now has an ally and someone who “gets” him. Upon hearing how much Eric dislikes Jeff, he along with Jonathan, Kurt and Don plan a mutiny to take back the ship.

What do you most admire and/or like about him?
KEN: I really like that he is flawed in many ways. He has an ego that wants to be stroked and acknowledged. He also likes being thought of as a leader. He also has a softer side which I love as well. He has deep feelings for Kurt but can’t admit that to himself or others. Jeff has a great capacity to find love and longs for a connection whether he is conscious of this or not. He dislikes humans yet has many things in common with them too.

What is it like working alongside such a talented ensemble on PEOPLE OF EARTH? Who do you get to work the most with?
KEN: It’s a dream come true! Such a talented ensemble of great comedians and actors. The writers and directors are so excellent as well. I love learning and this process has been one that I’ve got to learn from the best. I get to play with Bjorn Gustafsson the most, who plays Don. He has a wonderful playful side to him and is a fantastic scene partner. He really does an amazing job cracking everyone up on set – great physical comedian too! 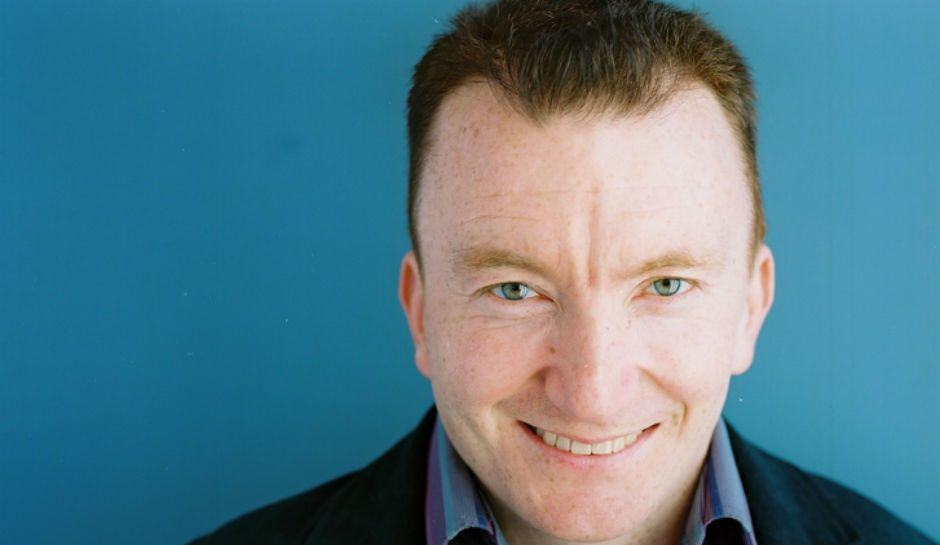 Any favorite scenes that you got to work on so far?
KEN: There are so many. Plotting the mutiny in the supply closet with Jonathan, Kurt and Don and persuading everyone to call it “Jeff’s Mutiny” is a stand out for me. I also really enjoyed the scene with myself and Kurt after he comes back to life. It’s such a sweet scene of two people connecting and relating to each other in an effortless and genuine way. It’s representative of how special it is to have that one person who you can just be yourself with. It’s a beautiful scene that shows the softer side of Jeff.

Then what is your favorite part about working on the show?
KEN: I love playing Jeff. I love being on a spaceship where he gets to push buttons and pull levers. He’s also great at pushing other people’s buttons, which is wonderfully amusing. I also love the challenge of taking on a character who is complex and nuanced. I also feel so grateful to get to work with all the cast, directors, writers and crew who make up the POE family.

What has been the one thing you as an actor have taken away from working on PEOPLE OF EARTH?
KEN: Being surrounded with such a talented cast had allowed me to really appreciate comedic timing and what’s makes things funny. During read-throughs, I’d silently marvel at how people delivered their lines with such comedic precision. I’ve also gained so much confidence in my own abilities to deliver and be funny and be believable as well. My background is in improv and for me it’s always being more challenging to work with a script than without. The writers do such an amazing job of creating funny and beautiful moments, so it’s made my job that much easier.

What do you hope viewers to take away from watching PEOPLE OF EARTH?
KEN: I hope people appreciate the humor and the heart of the show. It’s a very sweet show that does an excellent job of making you feel for both humans and aliens alike.

What is the biggest challenge working on PEOPLE OF EARTH?
KEN: The biggest challenge is working with the prosthetics that Jeff wears. The prosthetic takes about 2 hours to put on, which is pretty good. It’s all about trying to deliver lines through a prosthetic that effects your hearing, sight and breath (Jeff’s nostrils are higher than mine so I often have to breath through my eyes! Ha ha). It can also get pretty warm in it, so I’ve become best friends with the air conditioning. In the studio, they had big tubes carrying cold air which sometimes in between takes I’d pull a chair up in front of it and cool off. It’s the best job in the world though.

What is the biggest surprise working on PEOPLE OF EARTH?
KEN: The biggest surprise for me has been the all the outpouring of affection for Jeff. I knew people would like him, but I never realized just how much. I even saw on social media someone who got Jeff tattooed on his arm which is very flattering.

What has surprised you most about your career to date?
KEN: When I first started out doing improv classes here in Toronto at the Second City, it was just a hobby. I never thought that 10 plus years later that decision would change my life and essentially lead to a career in comedy and eventually lead me to being a series regular on a popular TV show. It’s like I’m living a beautiful dream. Truly grateful!

At this stage of your career, what do you think you have learned from the amazing variety of roles and projects you have worked on?
KEN: It gets harder for that critical part of me to say, “It’s all a fluke.” I’ve achieved so much over the years and it seems that there are more and more milestones I reach each year. I love how I don’t know what’s going to happen next, but have faith that it will all work out. I also really like doing good work and that I get to do wonderfully diverse and different projects.

Then what are the perks of where you are in your career right now?
KEN: Having more opportunities and access to cool experiences. For example, the cast of POE were invited to go to San Diego Comic Con which was such an awesome experience. I’ve never had an opportunity to meet so many fans and do so many interviews and photo shoots all in one day. It’s was like 100 once in a lifetime time experiences all packed into one weekend. It was the best!

If there were one role you would like to revisit, which would it be and why?
KEN: I did a guest star role on LOST GIRL a few years back, where I played the son of Krampus which was a cool opportunity and role. Looking back at it, I felt not so great about my performance. Perhaps I’ve learned so much over the last few years that, in comparison, I feel I’ve really improved as an actor. My fabulous acting coach Michael Gordin Shore, in our first session, put sandbags on my feet to stop me from shuffling and seating. Never really knew that was a problem, until he pointed it out. Finding a sense of stillness really helped with playing Jeff. Less is often more.

Do any of your characters and the situations they find themselves in ever leave a lasting impression on you?
KEN: Hmm. Good question. Funny enough, I did a commercial for NY Fries a few years ago and it was very funny and quirky. It was also the first time people really recognized me walking down the street. When people saw me, they would light up and be like, “Hey, you’re the hotdog guy!” It felt great. Playing that one role for a 30 second spot made me realize that entertaining others and making people laugh is in fact helping people. That was quite an epiphany for me and helped me transition into doing more acting. (I was working as a career counselor and teaching at a local collage in Toronto at that time).

Has there been any great advice you have gotten? What advice would you offer to other upcoming and aspiring actors?
KEN: My acting comes from an improv background and over the years as a performer, I’ve been able to develop a style and harness a voice that is uniquely me. Working with my comedy partner Isaac Kessler of 2-MAN NO-SHOW, we both come from a place of finding and following the fun. It’s important and essential for improv but it’s also such an important ingredient for acting for film and TV. It would seem that my favorite performers all seem to be channeling a sense of fun and playing and, for me, that makes all the difference. I also remember my director Chris Gibbs, who directed my two solo shows, saying to me minutes before I was about to debut my first solo show as part of the Toronto Sketch Comedy Festival here in Toronto — saying, “You can’t do anything more. You can’t do any more writing. All you can do is go out there and play and enjoy yourself.” That really resonated with me. My best shows are when I’m in a state of play and not in my head judging or being preoccupied by fear. My advice to any aspiring actors is to try and find the fun for you. Improv has helped me immensely in that it helped changed my mindset and rewired my thinking to be open and to say “yes” to everything. Keeping open to opportunities and saying “yes” to things allows for the unexpected to happen. I also believe it’s important to keep learning and training. Take a class of something that interests you or that is different. Life experiences will allow you to open yourself to new things and new outlooks. Find the fun for you and you will succeed!

Do you have any other upcoming projects that you can share that fans should keep an eye out for?
KEN: I’m going to be shooting a short film here in Toronto in October. It’s a wonderfully dark Christmas inspired tale – sort of like “Night Before Christmas” meets Stephen King’s “Misery.” It’s written and directed by Alex Hatz who is one of the funniest improvisers in the city.

To see Ken continue to bring the funny as Jeff the Grey, be sure to tune in for all new episodes of PEOPLE OF EARTH on Monday nights at 10:30 p.m. on TBS. Then to share in Ken’s joyful journey, you can follow him on Twitter @TheKenHall.