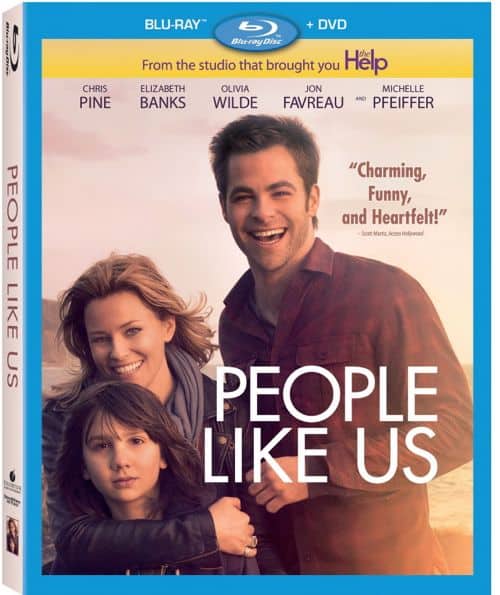 Seat42f and Dreamworks Pictures have teamed up to give THREE lucky winners a copy of PEOPLE LIKE US on BLURAY/DVD Combo Pack. For a chance to win leave a comment below telling us why you want to add PEOPLE LIKE US to your BLURAY/DVD collection. Only one entry per person. Contest ends October 10th. Winners will be notified on October 11th via email so make sure to use a valid email address when you post your comment.

From the studio that brought you the award-winning blockbuster “The Help,” comes an emotional and inspirational story about a young man’s journey of self discovery as he connects with a family he barely knows.  Starring Chris Pine (Star Trek), Elizabeth Banks (Hunger Games), Olivia Wilde (Tron) and Michelle Pfeiffer (Dark Shadows), DreamWorks Pictures releases “People Like Us” – a must-own, heartfelt and relatable story – on Blu-ray™ Combo Pack, DVD, Digital and On-Demand on October 2, 2012.

Inspired by true life events, the “People Like Us” Blu-ray Combo Pack comes complete with bonus material that delves deeper into the story that inspired the making of thisgreat film. These extras include audio commentary with filmmakers and talent, an extended scene of L.A.’s popular Henry Taco Stand featured in the film, deleted scenes and bloopers.

“People Like Us” is directed/produced by Alex Kurtzman (Cowboys & Aliens, The Proposal, Star Trek, TV’s “Hawaii Five-O”), written by Alex Kurtzman, Roberto Orci (Transformers, Star Trek, Cowboys & Aliens) and Jody Lambert (her first writing debut) and composed by award-winning composer A.R. Rahman (127 Hours, Slumdog Millionaire). Chris Pine, who plays Sam, is a twenty-something, fast-talking salesman whose latest deal collapses the day he learns his father has suddenly died. Against his wishes, Sam is called home to put his father’s estate in order and reconnect with his estranged family. While there, he uncovers a startling secret that turns his entire world upside down — he has a 30-year-old sister (Banks) he never knew existed.