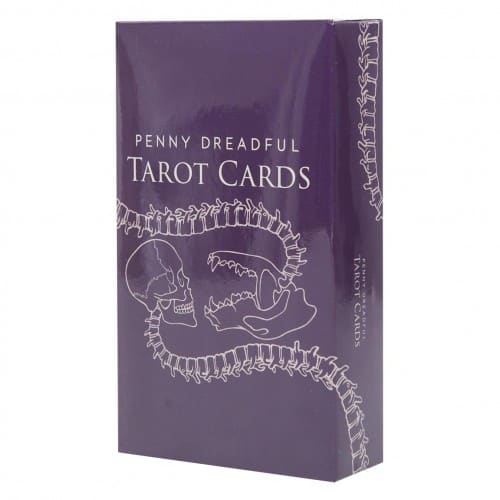 Seat42f and Showtime have teamed up to give ONE lucky winner a PENNY DREADFUL prize pack featuring a tarot card deck, a Penny Dreadful t-shirt and a Vanessa Ives notebook. For a chance to win leave a comment below telling us why you want to add this PENNY DREADFUL swag to your collection. Only one entry per person. Contest ends July 24th. Winner will be notified on July 25th via email so make sure to use a valid email address when you post your comment. Showtime provided the prizes but is not involved in selecting a winner.

As PENNY DREADFUL makes its San Diego Comic-Con debut, SHOWTIME will host autograph signings featuring cast members Josh Hartnett, Reeve Carney, Harry Treadaway, and creator and executive producer John Logan on Thursday, July 24th and Friday, July 25th. This marks the series’ first trip to the world-famous gathering in San Diego. Headlining the opening night of Comic-Con, PENNY DREADFUL’s panel session, moderated by Emmy® Award-nominated actress and host Aisha Tyler (The Talk, Archer), will be presented on Thursday, July 24th from 6:00-7:00 pm in Ballroom 20. A special package of PENNY DREADFUL-inspired tarot cards will be given to all fans who attend the panel session. Additionally, four lucky members of the panel audience will have the opportunity to win tickets to an exclusive PENNY DREADFUL party that evening.