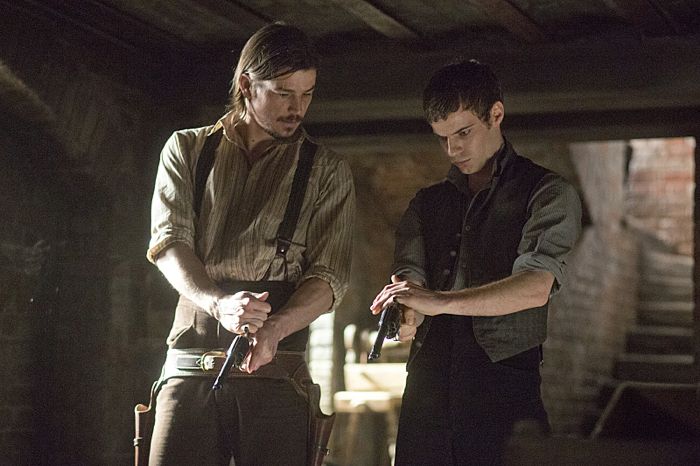 After the thrilling conclusion of its critically-acclaimed first season, the hit SHOWTIME drama series PENNY DREADFUL will make its Comic-Con debut on Thursday, July 24th from 6:00 – 7:00 pm with a panel session in Ballroom 20 on the first day of the world-famous annual gathering in San Diego. Featured panelists will include series stars Josh Hartnett, Reeve Carney and Harry Treadaway and series creator, writer and executive producer John Logan, and will be moderated by Emmy® Award-nominated actress and host Aisha Tyler (The Talk, Archer).

In partnership with Entertainment Earth, Titan Books and Bif Bang Pow!, SHOWTIME will host signings at the event and offer exclusive merchandise throughout the weekend. Fans will have access to special edition books, tarot cards and character figurines inspired by the series. Fans can visit the Entertainment Earth Booth (#2343) to purchase a deluxe deck of tarot cards inspired by the ones used throughout the series, along with character action figures, including Ethan Chandler (Josh Hartnett) and Vanessa Ives (Eva Green). Titan Books has published special editions of the classic novels that inspired the series. For the exclusive Penny Dreadful Collection of classic horror novels including deluxe hardcover editions of Mary Shelley’s Frankenstein, Bram Stoker’s Dracula and Oscar Wilde’s A Picture of Dorian Gray, which each contain original black and white illustrations by Martin Stiff, Louie de Martinis and Ian Bass, visit Titan’s booth #5537. In addition, the over 150,000 lanyards worn by all Comic-Con attendees will be branded by SHOWTIME and PENNY DREADFUL.

In PENNY DREADFUL, some of literature’s most famous characters – including Dr. Frankenstein, Dorian Gray and iconic figures from the novel Dracula, all brilliantly reimagined in a whole new light – have become embroiled in Victorian London. The series stars Josh Hartnett (Black Hawk Down), Eva Green (Casino Royale), Timothy Dalton (The Living Daylights, License to Kill), Reeve Carney (Spider-Man: Turn Off the Dark), Rory Kinnear (Skyfall), Harry Treadaway (The Lone Ranger), Billie Piper (Doctor Who, Secret Diary of a Call Girl) and Danny Sapani (The Bill). PENNY DREADFUL is a drama series created, written and executive produced by three-time Oscar® nominee John Logan (Hugo, The Aviator, Gladiator) and executive produced by Logan’s Desert Wolf Productions, along with Oscar winner Sam Mendes (American Beauty, Skyfall) and Pippa Harris (Revolutionary Road, Call The Midwife), both of Neal Street. The series, a co-production of Sky Atlantic, has been picked up for a second season, which will shoot in Dublin, Ireland for a 2015 premiere on the network. For more information and video clips, please visit www.penny-dreadful.com.

The PENNY DREADFUL panel will be moderated by Emmy Award-nominated actress, comedian, author and podcaster Aisha Tyler. Tyler is currently a co-host of CBS’ The Talk and the host of Whose Line Is It Anyway? She also voices the character of sexy superspy Lana on the hit animated series Archer. Her other television credits include Friends, Talk Soup, Ghost Whisperer, CSI, 24, Nip/Tuck, Reno 911 and Curb Your Enthusiasm, and film roles include Bedtime Stories and Balls of Fury. Tyler is the creator and host of the award-winning podcast, Girl on Guy – which has had over ten million downloads since its inception in 2011. Chosen as a best new comedy podcast of 2011 by iTunes, Girl on Guy is a show about stuff guys love, brought to you by the ultimate guy’s girl, where Tyler interviews top actors, comedians, directors, athletes, chefs, authors and more. She is also the author of two New York Times bestsellers Self Inflicted Wounds: Heartwarming Tales of Epic Humiliation and Swerve: Reckless Observations of a Post-Modern Girl.