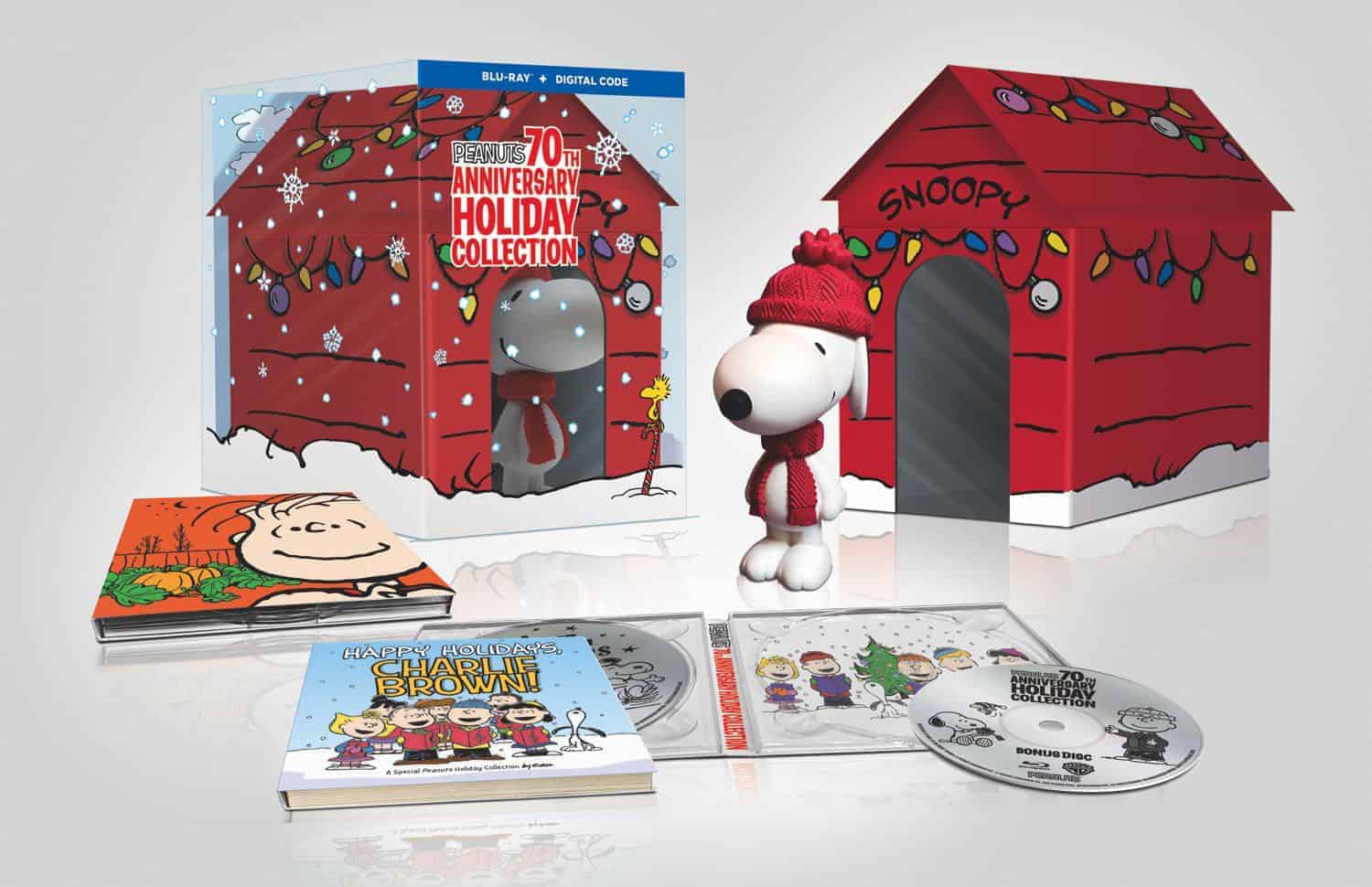 Good grief! The legendary Peanuts comic strip turns 70 and to celebrate the occasion, Warner Bros. Home Entertainment will release a gorgeous, collectible Blu-ray™ giftset comprised of three iconic animated holiday specials packaged in a limited edition Snoopy doghouse giftset! Titled Peanuts 70th Anniversary Holiday Collection Limited Edition, this collection will be released on October 1, 2019 and will include It’s the Great Pumpkin, Charlie Brown, A Charlie Brown Thanksgiving and A Charlie Brown Christmas, as well as six additional Peanuts specials that are re-mastered/restored, plus brand-new special features. All nine specials will be released on Blu-ray™ with a digital copy. This must-own box set comes with two additional, keepsake collectibles, including an exclusive Snoopy figurine and a Charlie Brown holiday book. This is a numbered, limited edition set with only 25,000 total sets available. It’s the perfect idea for seasonal gift-giving! Peanuts 70th Anniversary Holiday Collection Limited Edition will retail for $99.99 SRP ($141.00 in Canada).

Celebrate the holidays with Charlie Brown, Snoopy, Sally, Lucy, Linus, Peppermint Patty and the rest of your favorite Peanuts characters with this must-own, all-new collectors’ set. For 70 years, Peanuts have entertained fans with their heartwarming adventures. The first Peanuts holiday special, A Charlie Brown Christmas, which was produced by Lee Mendelson, directed by Bill Melendez and featured a catchy jazzy score by pianist Vince Guaraldi, won an Emmy® Award and served as the springboard for dozens of enormously successful television specials, which followed in subsequent years.

Created by Charles M. Schulz, one of the most influential cartoonists of all time, Peanuts, which focused on the lives of a group of young children, premiered in seven newspapers in 1950 and went on to become one of the most popular and longest running comic strips. At the peak of its popularity, Peanuts was published in over 75 countries and was translated into 21 languages. Peanuts became one of the most powerful brands in entertainment, after taking a leap from the pages of newspapers onto television, film, books, music, merchandise, theme parks and much more.

“Peanuts is an enduring classic. After 70 years, it continues to be a favorite with fans of all ages due to its timeless messages and appeal,” said Mary Ellen Thomas, Vice President Family & Animation Marketing. She added, “Peanuts characters are recognized globally. They have influenced pop culture and continue to captivate the hearts of viewers of all ages. To commemorate Peanuts’ milestone, 70th anniversary, we created this unique collector’s item, which pays tribute to the beloved cartoon with three of its most widely- recognized television specials which are available fully remastered and restored on Blu-ray™, in this new, beautiful limited edition set.”

* It’s the Great Pumpkin, Charlie Brown – This Emmy® Award-nominated special, finds the Peanuts gang outfitted in costumes, ready for trick or treating and crashing Violet’s Halloween party. Charlie Brown is in a ghost costume (with more eyeholes cut out than needed), Lucy dressed as a witch and Snoopy in a World War I flying ace costume. Linus decides to steadfastly hold vigil in the pumpkin patch as he awaits the Great Pumpkin.

* It’s Magic, Charlie Brown – This special finds Snoopy putting on a show after he checks out a book on magic tricks from the library. With Marcie and Sally as his assistants, he performs many tricks (some that work and some that don’t) before an audience. The grand finale features the biggest trick of all, making Charlie Brown disappear. To everyone’s amazement, Snoopy makes him invisible but doesn’t know how to bring Charlie Brown back. Will Snoopy find a way to reverse the trick?

* Charlie Brown’s All-Stars – Nominated for two Prime Time Emmys®, in this delightful special, Charlie Brown is faced with a difficult moral dilemma; should he accept brand new uniforms and give the rest of the gang a chance to be part of an official little league baseball team even if it means that due to policy, Snoopy, Lucy, Patty, Violet and Frieda must be kicked off?

* A Charlie Brown Thanksgiving – In this Emmy® Award-winning special, Peppermint Patty invites herself to Charlie Brown’s house for Thanksgiving dinner. Marcie and Franklin are soon added as dinner guests. Charlie Brown admits that his culinary skills are limited to “cold cereal and maybe toast.” Snoopy and Woodstock transform the ping-pong table in the backyard into a dinner table. As the guests arrive, they are each served two slices of buttered toast, some pretzel sticks, popcorn and jelly beans. Peppermint Patty is outraged at the meal and berates Charlie Brown until embarrassed and dejected, he leaves the table and goes back into the house.

* The Mayflower Voyagers – In this special from the This is America, Charlie Brown series, the Peanuts kids become pilgrims sailing to the New World aboard the Mayflower and endure the first hard winter on Plymouth Plantation.

* Play It Again, Charlie Brown – Nominated for an Emmy Award ®, this special focuses on Lucy’s undying and unreciprocated love for the piano playing child prodigy, Schroeder. In an effort to win Schroeder’s affection, Lucy, under Peppermint Patty’s advice, invites him to perform in a concert at an upcoming PTA meeting. Schroeder accepts and immediately begins rehearsing. Lucy, delighted with Schroeder’s acceptance, thanks Peppermint Patty. Peppermint Patty however, mentions she forgot to tell Lucy that only rock music will be featured in the program and that Schroeder won’t be able to play Beethoven. Lucy is left in anguish, knowing Schroeder will refuse to perform anything other than classical music and tries to find a way to break the news without his dropping out of the program.

* A Charlie Brown Christmas – In this Emmy® and Peabody Award winning classic, Charlie Brown is upset by how commercial the Christmas holiday has become. To coax him out of his holiday blues, Lucy suggests he direct the school’s Christmas pageant and decorate a glorious tree. Charlie Brown concedes. The tree he finds however, is puny, prompting everyone to ridicule him.

*Bonus content may not be in high definition. Audio and subtitles may vary.

Movies Anywhere is a digital movie platform that enables movie fans to discover, access, and watch their favorite digital movies in one place. Movies Anywhere brings together a library of nearly 7,500 digital movies from Sony Pictures, Twentieth Century Fox Film, The Walt Disney Studios (including Disney, Pixar, Marvel Studios and Lucasfilm), Universal Pictures (including DreamWorks and Illumination Entertainment) and Warner Bros., and will continue to expand the consumer experience as more content providers, digital retailers and platforms are added. By connecting participating digital retailers that include Amazon Prime Video, FandangoNOW, Google Play, iTunes and Vudu, movie fans can now bring together their digital movie collections (whether purchased or redeemed) in one place and enjoy them from the comfort of their living rooms, and across multiple devices and platforms, including Amazon Fire devices; Android devices and Android TV; Apple TV; Chromecast; iPhone, iPad and iPod touch; Roku® devices and popular browsers. Movie fans can also redeem digital codes found in eligible Blu-ray™ and DVD disc packages from participating studios and enjoy them through Movies Anywhere. Movies Anywhere – your movies, together at last.

The Credits
About Peanuts:
Charles M. Schulz first introduced the world to the Peanuts characters in 1950, when the Peanuts comic strip debuted in seven newspapers. Since then, Charlie Brown, Snoopy and the rest of the Peanuts gang have made an indelible mark on popular culture. Peanuts animated specials and series air on major networks and streaming services, including ABC, Cartoon Network and Boomerang in the U.S., Family Channel in Canada, and the WildBrain network on YouTube worldwide. Fans also enjoy Peanuts through thousands of consumer products around the world, amusement parks attractions, cultural events, social media, and a daily comic strip available in all formats from traditional to digital. In 2018, Peanuts partnered with NASA on a multi-year Space Act Agreement designed to inspire a passion for space exploration and STEM among the next generation of students. The Peanuts characters and related intellectual property are 41% owned by DHX Media (TSX: DHX, NASDAQ: DHXM), 39% owned by Sony Music Entertainment (Japan) Inc., and 20% owned by family of Charles M. Schulz.