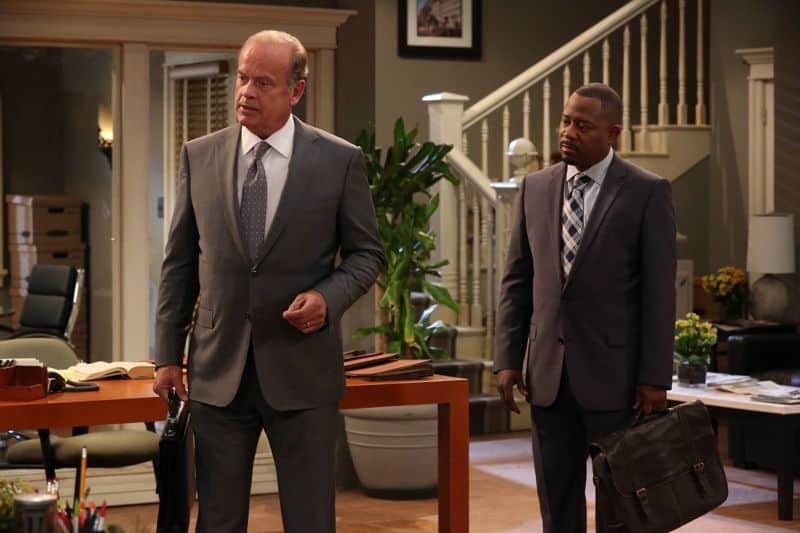 FX has a near-perfect record when it comes to sitcoms. After all, this is the network that gives us It’s Always Sunny in Philadelphia, Archer, and The League. They’ve also pushed boundaries with artistic experiments like Louie, Wilfred, and Legit. Even its Charlie Sheen-fronted Anger Management, which I was highly skeptical about, turned out to be pretty amusing. However, the latest effort making it to air, PARTNERS, which premieres this week, finally blemishes that run.

PARTNERS stars Kelsey Grammer (Fraiser, Boss) as Allen Braddock, a jerk of an attorney who is fired by his father for having a loose grasp on truth and legality. Allen falls in with Marcus Jackson (Martin Lawrence, Martin, Bad Boys), a well-liked lawyer allowing his wife to take advantage on him in a divorce. After Allen helps Marcus keep some of his money, they form a partnership, deciding to work together so that Allen can help Marcus earn a decent living, saving Marcus from his overly-kind soul.

This premise is very stale. How many buddy comedies do we need about an odd couple paired together by circumstance? What’s more, PARTNERS makes no attempt to even follow the tried-and-true formula when lying out its structure. Very little reason is given in the pilot for why Marcus would want Allen by his side, and there is no depth to the characters that justify their motivations. Instead, this is the duo we get, and they are put together with no solid reasons for why this should happen.

This is regrettable because the two performers are good actors. They both have resumes that prove their gravitas, and they could do better than this. Toss in other capable players such as Telma Hopkins (Family Matters, Half & Half) as Marcus’ live-in mother, McKaley Miller (Hart of Dixie) as a stepdaughter Allen is, for some inexplicable reason, supporting, Edi Patterson (A Thousand Words) as a zany assistant, and Rory O’Malley (Dreamgirls) as a one-note paralegal, and all around, the cast is being wasted unnecessarily.

PARTNERS goes for the easy, crass joke. After an insipid pilot, episode two, which airs just after the first, finds Allen and Marcus helping a gay couple who has been cheated by their wedding planner (Missi Pyle, Big Fish, The Artist). But rather than get into the real case and look for evidence, the leads go through the farce of a sham wedding, tossing in every cheap homosexual and racial gag they can think of. The situation is designed to be funny, and at its base, it is, but it certainly isn’t well-thought out or authentic, delivering a highly disappointing effort.

Given the first two episodes, the future of PARTNERS doesn’t look bright. It’s one thing to do broad humor and to do it well, but to go weak and lazy with the jokes doesn’t fly in the modern age. PARTNERS has the sensibility of a mediocre 90s series during a time when there are some real comedy gems dotting the landscape, and even the run-of-the-mill stuff usually clocks in several notches better than this. It’s pure drivel, not worth anyone’s time.

So why did FX choose to go this route? One assumes it has to do with the big names at the center of the project, and yet, while both of these actors have made some crap, they’ve also given us memorable, special roles that delighted audiences for long periods of time. One would think that with these guys attaching themselves to a project heading to a well-respected network, someone along the way would have made sure PARTNERS lives up to what it could and should be. Sadly, that does not appear to be the case.