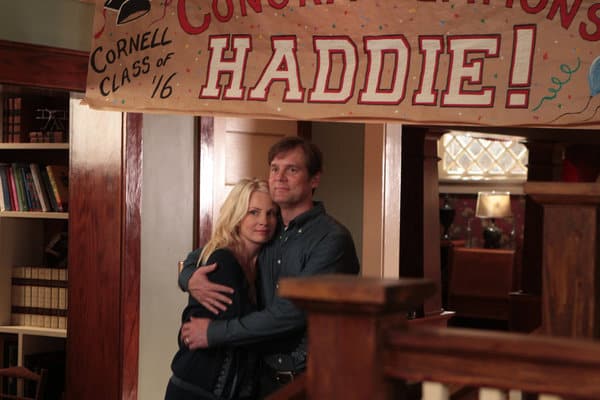 NBC’s PARENTHOOD returns this week with “Family Portrait.” Picking up five months after where last season left off, which makes sense, since it ended in late February, the Braverman clan gather to take a picture together. As one might expect, the road to get there is a little rocky, but it all comes together in the end, and there are some fantastic snapshots to show for it. Which doubles as a great summary of the series, too.

Sarah (Lauren Graham) is upset because Camille (Bonnie Bedelia) won’t let Mark (Jason Ritter) into the picture, even though they are engaged. The couple has not set a date yet, and Mark hasn’t even put a ring on her finger yet, so one might understand Camille’s hesitance, especially when there is a cautionary tale involving Crosby (Dax Shepard) already in the family’s history. But engaged means something, right?

Well, maybe not. Ritter is still only a recurring player, and PARENTHOOD quickly introduces someone else with their eye on Sarah, played by Ray Romano (Everybody Loves Raymond, Men of a Certain Age). Ray is a grumpy guy who has been hurt, but may come out of his shell a bit for Sarah. Plus, he has great chemistry with Drew (Miles Heizer), and also more age appropriate, as Mark shows some immaturity when dealing with the picture situation. No one wants to see Ritter leave, but if he does, it’s nice to know someone as fantastic as Romano is waiting in the wings to take his place. He is good in episode one, much, much better in episode two.

Adam (Peter Krause) and Kristina (Monica Potter) face their own impending departure as it’s time for Haddie (Sarah Ramos) to leave for college. Interestingly, Ramos continues to be listed as a main character, though she is absent from episode two, and there haven’t been any hints that the series might follow her to school. Whether she comes back a lot or a little, PARENTHOOD handles her leaving, withd all the pressures and mixed emotions that go with it, as wonderfully as one has come to expect from the show. Even better, these things continue for her parents into the second episode of the season in a very cute way.

Julia (Erika Christensen) is in a completely different stage of parenthood, still walking on egg shells around her newly adopted son. While Joel (Sam Jaeger) is ready to start treating the boy normally, as Sydney (Savannah Paige Rae) doesn’t understand the special circumstances so well, Julia is so afraid that he won’t be comfortable with them that she goes overboard in trying to make him feel accepted and welcome. Who is right? The answer may surprise you.

Things are not all peaches for the fourth Braverman offspring, either. Crosby and Jasmine (Joy Bryant) seem like a solid couple now, but that doesn’t mean that they don’t still have challenges. Crosby slipped back into less domesticated ways during their time apart, and getting back into the swing of things will not be easy. He may want to be a great husband, and he’ll try, but that doesn’t mean he can do everything that he wants to do. Look for a shifting balance here as the couple figures out what a mature marriage looks like. Frustrating for Crosby, it looks a lot like what Adam and Kristina have, though surely this younger pair will find their own way to do it.

The other story of note in “Family Portrait” belongs to Amber (Mae Whitman). When last we saw her, she made a very adult decision, picking a possible career over a boyfriend. In the first episode back, she makes the mistake of sleeping with a guy who is otherwise involved. Adam rushes to her rescue, his feelings about Haddie possibly clouding his judgment. What is impressive is the way in which Amber deals with the situation, showing how much she has grown. Her maturation has been a true pleasure to watch, and seeing her enter the real world with grace and good decision making skills is terrific.

Overall, “Family Portrait” feels a little long, possibly because it takes time to catch up with the Bravermans, for whom much time has passed. But by episode two, things are flying by again, even if a little forced, somewhat over the top drama is tossed in late in the second episode. Bottom line, television’s favorite, heart warming family is back with the same quality of heart, humor, and realism fans have come to expect. It feels good.