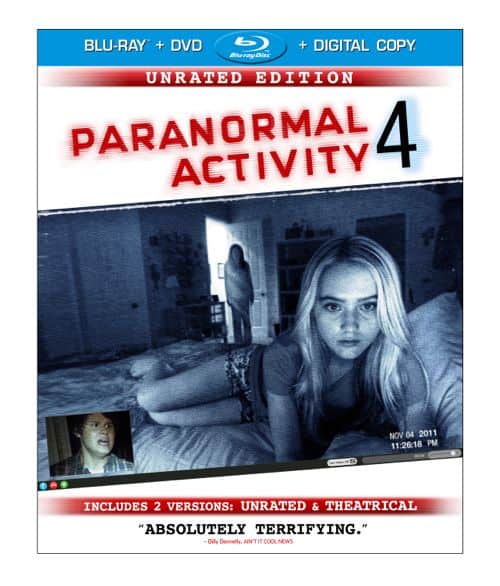 The global horror sensation that has mesmerized fans around the world continues to terrify and thrill audiences with the latest installment in the franchise, PARANORMAL ACTIVITY 4, debuting on January 29, 2013 in a Blu-ray/DVD combo pack with UltraViolet™ and a Digital Copy.  PARANORMAL ACTIVITY 4 continues the shocking story of the evil surrounding Katie and her nephew Hunter as a new family begins experiencing unexplained events that quickly turn deadly.  Fans can be the first to own the newest chapter via Digital Download, which will be available on January 15, two weeks before the Blu-ray/DVD.   The Digital Download will be available in either the theatrical version of the film or an unrated version with footage not seen in theaters.

The PARANORMAL ACTIVITY 4 Blu-ray/DVD combo pack includes both the theatrical version of the film and the unrated version, as well as “The Recovered Files” with nearly 30 minutes of new found footage.  In addition, the Blu-ray/DVD combo available for purchase will be enabled with UltraViolet, a new way to collect, access and enjoy movies.  With UltraViolet, consumers can add movies to their digital collection in the cloud, and then stream or download them – safely and securely – to a variety of devices.

A single-disc DVD containing the theatrical and unrated versions of the film will also be available on January 29th.