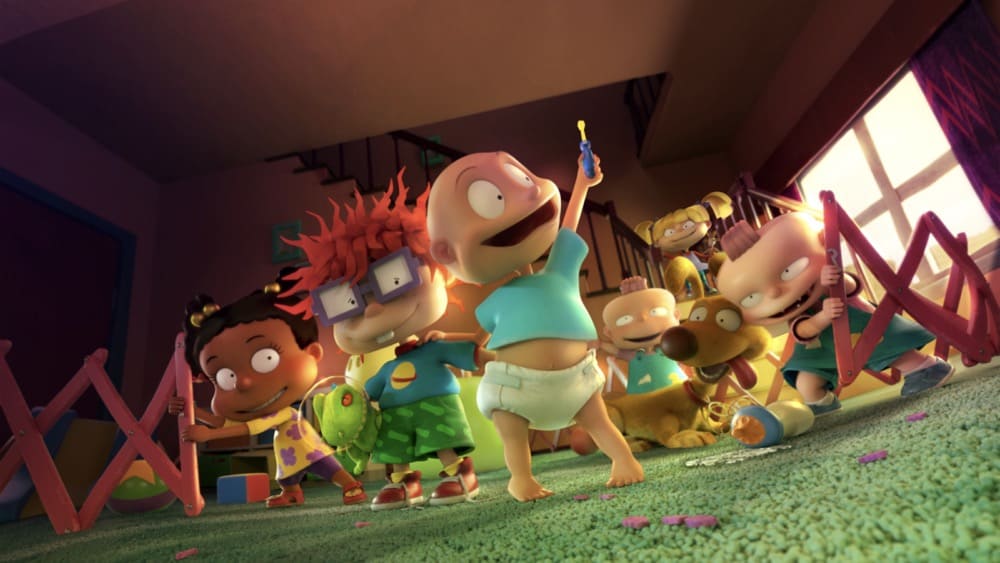 Paramount+, the streaming service from ViacomCBS, today revealed the trailer and key art for the all-new RUGRATS, following the even bigger adventures born from the colorful imaginations of Tommy, Chuckie, Phil, Lil, Susie, and Angelica. Premiering exclusively Thursday, May 27 on Paramount+, and produced by the Nickelodeon Animation Studio, the reimagined babies continue to explore their world in brand-new adventures that will both complement and evolve the original series’ beloved stories.

Beginning May 27, the first set of episodes of the RUGRATS debut season will be available on Paramount+, with the rollout of additional episodes to be announced at a later date. In the one-hour premiere episode, “Second Time Around,” Tommy leads the babies on a daring adventure to help Chuckie after his big attempt to be brave goes horribly wrong. Warning: dinosaurs are involved. Following the season’s run on Paramount+, the series will air on Nickelodeon at a later date to be announced.

The original “Rugrats” series launched in August of 1991 and instantly became a groundbreaking phenomenon, spawning consumer products and three hit theatrical releases, cementing its place in pop culture history through its iconic characters, storytelling, and unique visual style. “Rugrats” was in production for nine seasons over the course of 13 years. The series earned four Daytime Emmy Awards, six Kids’ Choice Awards, and its own star on the Hollywood Walk of Fame.

Paramount+, a direct-to-consumer digital subscription video on-demand and live streaming service from ViacomCBS, combines live sports, breaking news, and a mountain of entertainment. The premium streaming service features an expansive library of original series, hit shows and popular movies across every genre from world-renowned brands and production studios, including BET, CBS, Comedy Central, MTV, Nickelodeon, Paramount Pictures, and the Smithsonian Channel. The service is also the streaming home to unmatched sports programming, including every CBS Sports event, from golf to football to basketball and more, plus exclusive streaming rights for major sports properties, including some of the world’s biggest and most popular soccer leagues. Paramount+ also enables subscribers to stream local CBS stations live across the U.S. in addition to the ability to stream ViacomCBS Streaming’s other live channels: CBSN for 24/7 news, CBS Sports HQ for sports news and analysis, and ET Live for entertainment coverage.

Nickelodeon, now in its 42nd year, is the number-one entertainment brand for kids. It has built a diverse, global business by putting kids first in everything it does. The brand includes television programming and production in the United States and around the world, plus consumer products, digital, location-based experiences, publishing, and feature films.