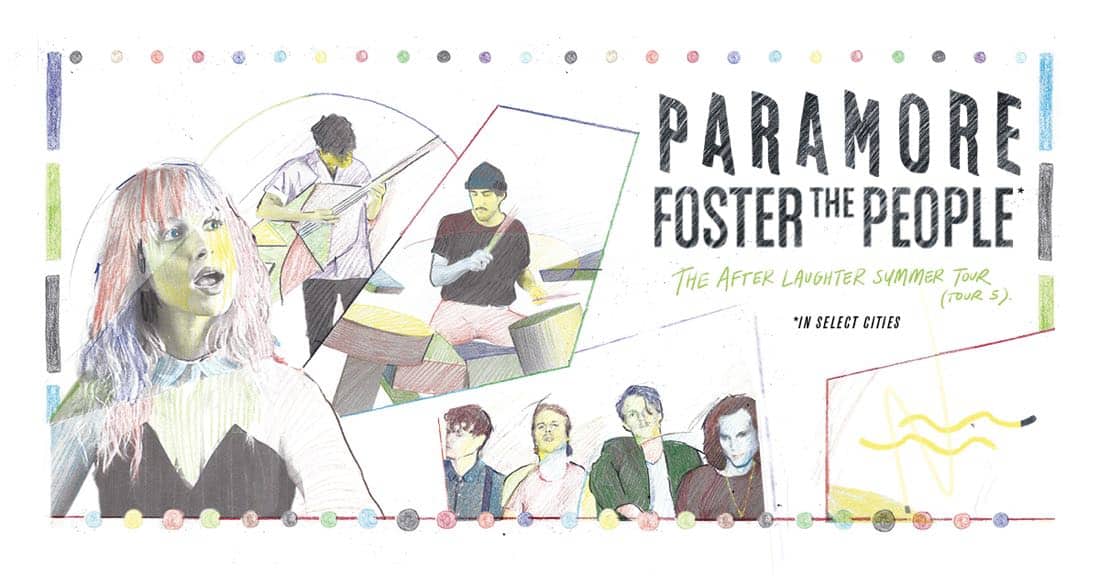 Following their massively successful “Tour Two” last fall, GRAMMY® Award-winning band Paramore today announce their 2018 North American “After Laughter Summer Tour (Tour 5).” Foster The People will join the summer amphitheater and arena tour kicking off June 12 in St. Augustine, FL and make stops across the U.S. and Canada including Toronto, Brooklyn, Chicago, New Orleans, Los Angeles and more. The 26-city trek will wrap on July 24 in Morrison, CO at the famous Red Rocks Amphitheatre. A special guest will also be added to the tour and announced soon.

In keeping with their commitment to ensure tickets get into the hands of their fans, not scalpers or bots, Paramore has partnered with Ticketmaster to use its Verified Fan platform. Verified Fan will power all ticket presales, providing fans who truly want to attend the show with the best opportunity to get great tickets.

Citi® is the official presale credit card of the ‘After Laughter Summer Tour (Tour 5)’, and as such, Citi cardmembers can take advantage of a special Citi Presale powered by Verified Fan opportunity for tour dates in the United States. Citi cardmembers can register starting Thursday, March 8 at 10am ET through Sunday, March 11 at 10pm local time to unlock access to tickets and use their Citi card to complete the ticket purchase if verified. The Citi Presale begins Tuesday, March 13 at 10am local time until Thursday, March 15 at 10pm local time. To register for the Citi Presale powered by Verified Fan visit: www.citiprivatepass.com.

Tickets will go on sale to the general public beginning Friday, March 16 at 10am local time at LiveNation.com.

The band also previously announced the third installment of their hugely popular PARAHOY! vacation experience, an interactive four-day festival at sea presented in partnership with Sixthman Productions and Norwegian Cruise Lines. The cruise – a full charter aboard the spectacular Norwegian Jade – will feature a specially selected schedule of bands, activities, and truly unique Paramore live performances. PARAHOY! sails roundtrip from Miami, Florida to Nassau, Bahamas from April 6th through 10th, 2018 and the boat is completely sold out. For complete information, please visit www.parahoy.com.

The 2018 summer amphitheater and arena tour is in celebration of their acclaimed fifth studio album After Laughter, which was released May 2017 through Fueled by Ramen. Produced by Justin Meldal-Johnsen and Paramore’s own Taylor York, After Laughter hit number one on Billboard’s U.S. Top Alternative Albums chart and the U.S. Top Rock Albums chart. It was also included on several Best Album of the Year lists in 2017 including Billboard, NME, NPR, Rolling Stone and more. The album featured smash hits “Hard Times,” “Told You So,” “Fake Happy” and most recently, “Rose-Colored Boy” which was released on February 5, 2018 along with their retro morning-news themed music video, which currently has over 3.7 million views.

Foster The People most recently wrapped a world tour in support of their third studio album Sacred Hearts Club. The album released July 2, 2017 and featured hit songs including “Pay the Man”, “Doing It for the Money”, “SHC,” and “Sit Next To Me.” The band also played a slew of festivals last summer and fall including Lollapalooza, Meadows Music and Arts Festival and Austin City Limits.

*Foster The People not performing
+Festival date, not part of After Laughter Summer Tour

About Paramore:
Paramore – 4x GRAMMY® nominees and winner of the “Best Rock Song” trophy at the 57th Annual GRAMMY® Awards – have long established themselves as international rock superstars. Their new album, After Laughter, hit number one on Billboard’s U.S. Top Alternative Albums chart and the U.S. Top Rock Albums chart. Their previous self-titled album “PARAMORE” also made a chart topping debut atop the SoundScan/Billboard 200 upon its release marking Paramore’s first #1 album to date and featured two 2x RIAA platinum-certified hits, the top 10 “Still Into You” and the #1 smash, “Ain’t It Fun.” Paramore has had a truly remarkable run of RIAA certified albums and singles since coming together in Nashville in 2004, from 2005’s gold-certified debut, “ALL WE KNOW IS FALLING” and 2007’s 2x platinum-certified breakthrough, “RIOT!” (with its 3x platinum-certified hit, “Misery Business,” as well as the platinum-certified singles “crushcrushcrush” and “That’s What You Get”) to 2008’s worldwide platinum “Decode” (from Chop Shop/Atlantic’s chart-topping “TWILIGHT – ORIGINAL MOTION PICTURE SOUNDTRACK”) and 2009’s platinum-certified “brand new eyes” and its GRAMMY®-nominated smash, “The Only Exception.” Long regarded as an exhilarating live act, Paramore has spent much of the past decade-plus on the road, with highlights including sold out headline arena tours and show-stealing festival sets around the globe. Paramore has consistently drawn both critical acclaim as well as a wide ranging list of international honors and accolades, including a GRAMMY® Award, two People’s Choice Awards, three NME Awards, three MTV Video Music Award nominations, and much much more.

About Foster The People:
Founded in 2009, Foster the People achieved success with the 2011 release of its debut album Torches, which has sold nearly two million albums and over nine million singles worldwide. Torches features the #1 hit single “Pumped Up Kicks,” which was declared “the year’s anthem” by SPIN. Foster the People garnered three Grammy nominations for its monumental debut, including Best Alternative Album, Best Pop Duo/Group Performance for “Pumped Up Kicks” and Best Short Form Music Video for “Houdini.” Supermodel was the second full-length record from Foster the People. Influenced by frontman Mark Foster’s world travels and shifting perspective, the album was recorded in studios around the world and features fan favorites including “Coming of Age” and “Best Friend.” The band’s third and latest album Sacred Hearts Club, released in July 2017, is a 12-track effort that joyously flexes the group’s creative powers, fusing neo-psychedelia, punk, funk, electronic, dance and hip hop. Foster points to the polarized global climate as being a catalyst towards a more thoughtful approach on the album, inspiring them to make something that was joyful and unifying. The band’s current single “Sit Next To Me” was described as “pure shimmering pop” by the Associated Press, hit Top 5 at Alternative Radio and recently debuted on the Top 40 airplay chart.