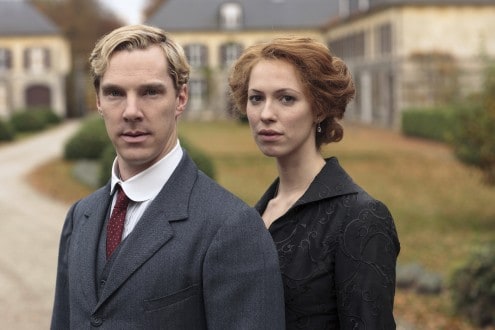 HBO will take its turn presenting the miniseries PARADE’S END this week, its partner in the endeavor, the BBC, having already broadcast it last fall. Perhaps HBO saved it so it would have a rich period piece this winter, just as it had Mildred Pierce last year, or perhaps they wish to attract those in the early stages of Downton Abbey-withdrawal. Whatever the reason, now seems an opportune time to air it.

The title PARADE’S END refers to the excising of the British upper-class way of life, the manner in which the elite of society put on certain airs, stay true to traditions, and worry about the way they are perceived. There is a strict social structure in place in the early twentieth century, mostly destroyed during World War I, and this miniseries tells that tale.

Well, it tells a personal take on characters who make that transition. Yes, the piece is somewhat sweeping, and does have a large-ish cast. But there are really three main players in the story who stand about above everyone else, and who are the case study made an example of here.

Benedict Cumberbatch (Sherlock, Star Trek Into Darkness) plays Christopher Tietjens, a noble Englishman who sticks with the way he is brought up, no matter what. This means he goes through with his marriage to the wicked, manipulative Sylvia (Rebecca Hall, The Town, Frost/Nixon), even though he knows she’s been sleeping around on him, and it’s very likely her pregnancy isn’t a result of his actions.

Their union is predictable unhappy, and Sylvia doesn’t even try to stay faithful, spending much time apart from her groom in the company of other men. Christopher, though, keeps up appearances, even as he begins falling for the sweet, strong-willed Valentine Wannop (Adelaide Clemens, Rectify, Vampire).

Looked at through the modern eye, it’s very hard to understand why Christopher doesn’t just leave Sylvia for Valentine, a topic discussed in the series. Why should he show any loyalty to someone who is so nasty to him? But that’s Christopher’s way of life, so I’m not sure it even occurs to him to end his own suffering, at least not for awhile. Part of the beauty of the piece is the illustration of the type of man Christopher represents, a specific guy from a specific period in time in a specific place.

In fact, PARADE’S END succeeds very well artistically. The sets and costumes are made expertly, and the details that set an authentic tone are present. The writing is smart, and the characters are well defined. Presenting World War I as a catalyst is a good idea, executed with much success.

The cast is fantastic, of course, especially the three leads. For those who are familiar with Cumberbatch’s work, this should come as no surprise. The girls’ talent matches hiw, but this is Cumberbatch’s showcase, and he owns every moment he is on screen, conveying much in his sad eyes.

The supporting players also lend both a fuller picture, and some levity to the proceedings. They include Roger Allam (The Thick Of It, The Queen), Rupert Everett (My Best Friend’s Wedding), Miranda Richardson (Rubicon), Janet McTeer (Damages), Clare Higgins (Homefront), Stephen Graham (Boardwalk Empire), and Rufus Sewell (The Pillars of the Earth), each of whom adds a positive element.

My problem with it is that it’s slow and a bit boring. Like Mildred Pierce, it meanders for quite awhile, and there isn’t a lot of movement. Does it really take five hours for a trio to work out their romantic arrangements? Especially when we, the viewer, know right away the decision that Christopher should make. His struggle is interesting, to be sure, but the running time will likely drive some potential watchers away.

PARADE’S END is strongly British, and not completely accessible. One must pay attention to follow the story, and it isn’t very light-hearted. I enjoyed what I’ve watched of it (I haven’t finished it yet), but it’s a miniseries I’d have to be in a certain mood to really appreciate, for sure.

PARADE’S END airs this Tuesday, Wednesday, and Thursday on HBO.