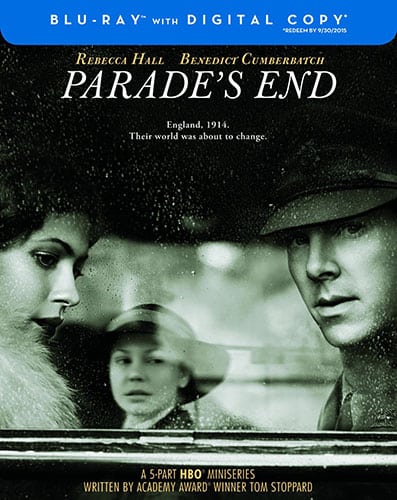 Seat42f and HBO Home Entertainment have teamed up to give TWO lucky winners a copy of PARADE’S END on BLURAY. For a chance to win leave a comment below telling us why you want to add PARADE’S END to your BLURAY collection. Only one entry per person. Contest ends September 24th. Winners will be notified on September 25th via email so make sure to use a valid email address when you post your comment.

A sweeping saga that will resonate with Anglophiles everywhere, Parade’s End is “…brilliant…eloquent…a television masterpiece” (San Francisco Chronicle) in its exploration of a bygone England – spanning from the Edwardian era to the chaos and destruction of World War I. Based on four related novels by Ford Madox Ford published in the 1920s, the 5-part HBO® Miniseries was adapted for the small screen by acclaimed playwright Tom Stoppard (Shakespeare in Love) who vividly captures the devastation of war and the end of Edwardian ideals, bridging the gap between feudal England and the dawn of modernism. Parade’s End will release on Blu-ray with Digital Copy, DVD, and Digital Download ($49.99 and $39.98 respectively) on September 10, 2013, and includes a NPR interview with Tom Stoppard.

Set over a tumultuous ten-year period 100 years ago, Parade’s End centers around honorable English aristocrat Christopher Tietjens (Golden Globe® nominee Benedict Cumberbatch, War Horse), who puts principles first by marrying Sylvia (Golden Globe® nominee Rebecca Hall, Vicky Cristina Barcelona), a pretty, manipulative socialite who gives birth to a child who may not be his. While enduring his new wife’s whims and overt indiscretions, Tietjens finds himself captivated by a fearless young suffragette, Valentine Wannop (Adelaide Clemens, The Great Gatsby), but refuses to give in to their mutual passion or end his marriage to Sylvia. Experiencing war and the far-reaching changes to the English class system as well as being drawn to the possibility of a future where honor and passion might co-exist, Tietjens gradually lets go of the ties that bind him to the traditions of his privileged past.