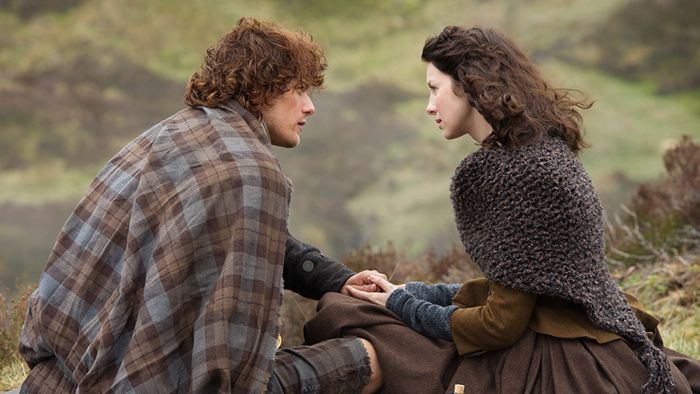 Starz’ OUTLANDER heads into hiatus after Saturday night’s mid-season finale, “Both Sides Now.” In the episode, Claire (Caitriona Balfe) begins really adjusting to life with the MacKenzie clan, learning their ways and how to defend herself, letting herself be a part of them, truly. She still is haunted by the nagging urge to go home, though, especially after things turn dark. Meanwhile, we finally get a glimpse of what Frank (Tobias Menzies) is going through in the 1940s, searching for his lost wife. And the episode ends with a reunion.

Claire is happy being married to Jamie (Sam Heughan). How can she not be? He’s a good, kind man who adores her, and the sex between them is clearly something special. They luxuriate in being a married pair, and with him, she is finally starting to let go of the life she once led. She is in this present now, and it takes her new marriage to get her to accept that and to appreciate what she has. Plus, the scenes of her learning how to wield a knife with her new kin are charming and fun.

But after a brief battle and an almost-rape, she longs for home. How can she not? While sexual assault may still exist in the time she comes from, the world is more civilized and governed by the rule of law, so it’s less likely to happen. She’d have protection, a house she could live securely in. A police force may not be as invested in her safety as clansmen, but there’s a sense of stability in her own time, rather than in this wild past, especially now that the Nazis have been defeated, so of course Claire backslides a bit in her acceptance of circumstance.

I don’t think that Claire will ever fully belong to either century now, though. Even should she go home to Frank, she has these feelings and history with Jamie that will always live on in her head. Whereas OUTLANDER begins with a woman on a journey back home, it’s now the story of a wife torn between two worlds and two husbands. It will be extremely interesting to see if, once Claire does get back to Frank, which I assume has to happen at some point, she can be as happy as she once is with him, or if her pull towards Jamie has become stronger.

Frank has no Jamie-like equivalent, so his efforts to find his missing wife have consumed his being. He drinks, he rails on policemen (who may or may not be inept), and he’s just generally miserable. With no feasible explanation as to what happened to Claire, he’s adrift, not willing to move on. No one knows how to help.

He does have those who try. Reverend Wakefield (James Fleet) is more than generous, and Mrs. Graham (Tracey Wilkinson) offers up a time travel legend that she believes might apply. But Frank is distraught and helpless, not a state that suits him well.

This leads to an encounter in an alley that a man with his wits about him would have seen coming as a trap, but not this version of Frank. It’s a good thing he’s able to defend himself, finally showing us the side of him that he must inherit from his cruel ancestor, Black Jack (also Menzies). At least Frank has the good sense to feel bad about his actions, even when those he beats well deserve it. This highlights the differences between the two men, even while illustrating the similarities.

In the end, both Frank and Claire wind up at the stones on the hill, Craigh na Dun, and viewers may be forgiven for thinking we’re in for a happy reunion. After all, there’s an otherworldly power that has brought them to this point, and the episode is directed in such a way that it seems inevitable that Claire will go home now. However, it’s far more interesting that it doesn’t happen, a frustrating tease that extends the story and leaves us impatient for OUTLANDER’s April return.

OUTLANDER rubs salt in the wound when, instead of falling back into Frank’s arms, Claire ends up with Black Jack. It’s sort of the reunion we want, but twisted in a terrible manner, Claire helpless in the hands of a man who looks just like Frank, but is cold and evil. Thank goodness Jamie pops in to save her at the last moment, though we don’t see the resolution of this scene, because the thought of her staying Black Jack’s captive while the show is off the air would not be a good one to leave fans with.

“Both Sides Now” is a terrifically constructed episode, from its parallel worlds story, to the growth the characters of Claire and Frank go through. It is a fitting way to end this first half of the season, and is enjoyable in its own right, a somewhat stand-alone installment that also serves the larger arcs very well. OUTLANDER has become a very compelling series, and this mid-season finale lives up to that reputation, with appropriate tie-ups and intriguing hanging threads.

OUTLANDER will resume its freshman run April 4th on Starz.