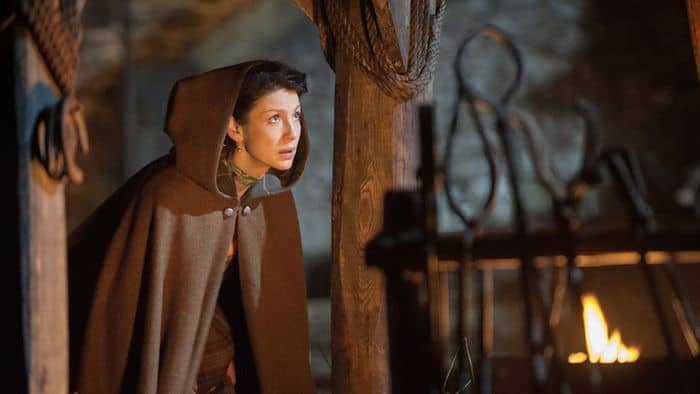 This week’s entry of Starz’ OUTLANDER is called “The Gathering.” As all of clan MacKenzie gathers to pledge their allegiance to Colum (Gary Lewis), Claire (Caitriona Balfe) plots her escape. If she can map the castle and its guard patterns, might she be able to find the stone that could possibly send her home again? There’s a lot of uncertainty and plenty of obstacles standing between the out-of-time nurse and her home.

Claire is smart, but she is still out of her depth. This becomes clear as, despite all the precautions and planning she does, she still puts herself in a no-win scenario, as Jamie (Sam Heughan) tells her when he catches her by the horses. She’s lucky it’s Jamie, who kindly escorts her back to the keep, rather than just about anyone else, who wouldn’t look so favorably on the prisoner making her escape.

Jamie isn’t really part of the clan, though, as you may remember. He’s staying with his uncle, Colum, to hide out from the English that are after him, but he doesn’t quite belong to this group. His own outsider status, combined with his obviously-growing feelings for Claire, likely influence the way he handles the situation.

Claire’s bumbling puts Jamie in danger. He is hiding in the stables to avoid making his own pledge to Colum, knowing that if he fails to do so, his countrymen will kill him, but if he does swear allegiance, he’s next in line to be laird, putting his life in danger from the current heir, Dougal (Graham McTavish). It looks like a no-win scenario until a brilliant Jamie deftly sidesteps both scenarios, making everyone reasonably happy and keeping his life, at least for now.

Jamie and Claire seem well fit together. They both aren’t quite where they belong, and they both have enough wits and luck about them to keep them alive, though in a precarious position. This definitely plays into their bond, and should serve them well as they only fall more in love, as they surely must.

After failing to escape, Claire reluctantly goes along on a boar hunt, where she ends up watching Geordie (Bryan Larkin, Running in Traffic) die after being gored. I’m actually surprised more isn’t made for Claire’s outspoken distaste for the hunt itself. I assume this is because the others realize she has seen death caused by violence before, earning her a pass women unaccustomed to such an experience wouldn’t get. Claire’s life has given her the weight to make judgment in such matters. Thankfully, she doesn’t gloat when proven right.

Geordie isn’t the most important focus in his own death scene. Instead, OUTLANDER shows us Dougal and Claire holding him as he dies, united in purpose at last. Douglas gets more complex this week in multiple scenes, including a semi-touching moment during a game between him and Jamie. A failed drunken rape of Claire reinforces the view many viewers hold of him as a selfish leader whom the people would not be well served to have rule over them. But watching him Geordie, and then the regard he gives Claire after seeing her in action, tell a different story. Perhaps he’s just a man of his time, hardened, but not evil. I look forward to seeing where they go with him next.

Which brings us to the conclusion of “The Gathering,” in which Dougal asks Claire to accompany him as he travels around the land. Well, asks may be too mild a word, as she surely has no choice in the matter. This may afford her a better opportunity to get away, not being so closely guarded now that he trusts her at least marginally, but it also may keep her to her current fate more strongly, as she can’t seem to resist helping anyone that needs it, even delaying her flight to give Laoghaire (Nell Hudson) peace of mind, and she will definitely be encountering those who could use her help.

Something interesting I caught in “The Gathering” is a reference to The Wizard of Oz. This is intriguing because the previous episode also alludes to the story. Claire is very Dorothy-like, having been swept away from her home and regarded somewhat suspiciously by the locals because of her ‘magical’ skills. Is OUTLANDER taking a convenient parallel and exploiting it for modern audiences, or will they make long-term use of it, drawing more connections between Dorothy and Claire?

Though, one does wonder a bit how Claire is so familiar with the film, quoting it to Laoghaire, which came out during the war she just escaped, and wasn’t highly popular in its initial release. She doesn’t seem the type to indulge in such fantasies during her gritty reality.

“The Gathering” lacks many flashback scenes with Frank (Tobias Menzies) that have been so prevalent in previous weeks, but that’s a good thing. We know Claire’s history well enough now, and more appearances by her husband tend to just drag things down.

The other cool thing in OUTLANDER this week is the introduction of a rival for Mrs. Fitzgibbons (Annette Badland), Iona MacTavish, who is played by Diana Gabaldon, the author of the OUTLANDER books. She may not be an actress, but she is great in the role, and although only billed as a cameo, I find myself hoping she’ll be recurring. Producer Ron Moore also makes a cameo, but in a much smaller capacity.

“The Gathering” is probably my favorite episode of OUTLANDER thus far. It is fun and exciting, with a healthy dose of suspense and character development. It’s the first week the show really seems to know what it is, and now that the setup is established, begins to play with the players and their relationships. If the rest of the season is as good as this week, consider me firmly in the fan camp.