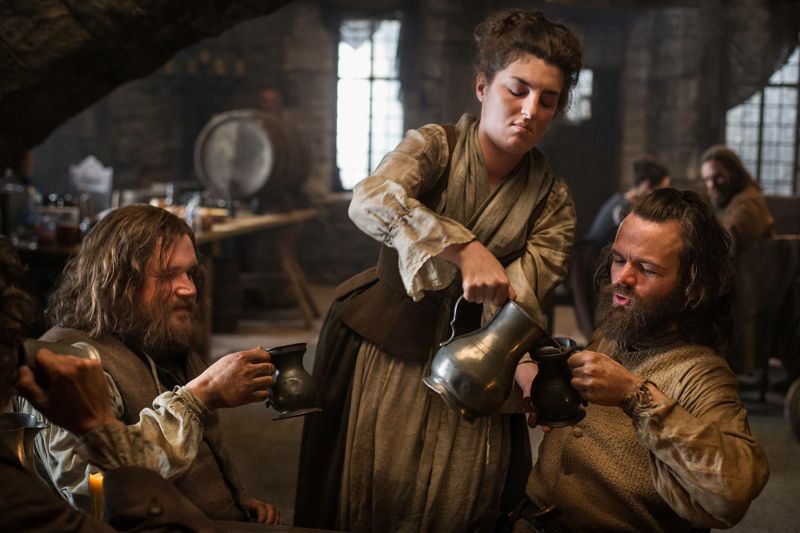 The penultimate episode of OUTLANDER season one on Starz, which aired tonight, is called “Wentworth Prison.” Jamie (Sam Heughan) awaits execution there following his capture, but an unexpected visitor gives the Highlander at least a temporary stay. Meanwhile, Claire (Caitriona Balfe) and her small band of recruits tries to figure out how to penetrate the jail, find Jamie, and get him out before it’s too late.

“Wentworth Prison” is the first episode of Outlander that I didn’t enjoy much overall. This is not because the series is bad, the writing is weak, or the acting is wooden. None of those are true. Instead, it’s the constant brutal torture that permeates the hour. I haven’t read the books, so can only assume that the television program is being faithful to the source material. But all of the things Black Jack (Tobias Menzies) does to Jamie turn one’s stomach, and there are oh so many of them this week that it makes the episode hard to watch, and not in a good way.

I assume Jamie will be rescued. It doesn’t happen this week, but Claire plants the seeds that Murtagh (Duncan Lacroix) and the others can follow to get past the walls and get to their clansman. Jamie is too essential a character to lose, and I think we see him in the 1940s in the pilot of the show, so he has to survive to get there.

The person that cannot survive is Black Jack. I do not know when he will die (though he himself now does), but I hope it’s sooner rather than later. Outlander can bring in other villains to stay interesting. It doesn’t need this man who has been so ruthless and so awful to Claire and Jamie. I am ready for him to go down, and go down hard.

What I wonder is, how can Claire ever return to Frank after this? While Frank is not Black Jack and Claire has known him long enough to know this, there is no getting past that they look exactly the same (both played by the same actor). Any time Frank would get annoyed with her in the future, she’d have to see a bit of Black Jack in him. I don’t know much of what’s to come on OUTLANDER, but I’m pretty sure Claire gets home at some point long before the series finale (given some casting news that has been publicly released), so I wonder how her experiences in the past will affect her marriage.

Despite how much I didn’t much enjoy watching “Wentworth Prison,” there are some awesome parts worth praising. When Claire tells Black Jack she’s a witch and gives him the day of his death, I cheered. When Angus (Stephen Walters) gambles in the tavern and gleans valuable info, that’s a really fun scene. OUTLANDER maintains its layered, enjoyable characters and setting, even when the plot takes a dark turn.

There’s a bit of fun trivia that pertains to “Wentworth Prison.” The man running the place, Sir Fletcher Gordon, is played by Frazer Hines. Hines is famous for playing The Second Doctor’s (Patrick Troughton) companion in Doctor Who for several years, mostly during the late 1960s, and being the longest-running companion in the show. His character’s name was Jamie McCrimmon, and he was from 1746 Scotland. Diana Gabaldon, author of the OUTLANDER books, says her character and setting is inspired by this role. So, very cool to have him show up!

I don’t want to rag on “Wentworth Prison” too much. While I didn’t like it, it was the subject material, not the quality of the production, that sparked that opinion. I still think it sets up next week for a heck of a season finale, and I have no plans to lessen my admiration for the show as a whole.