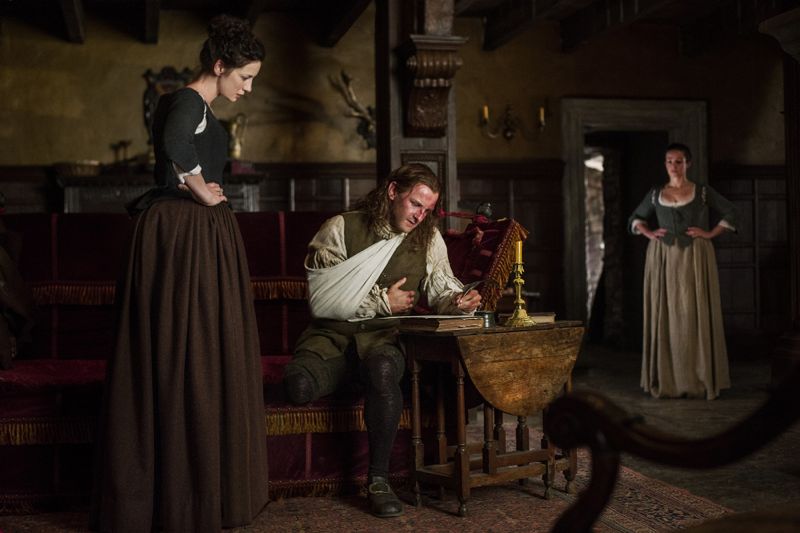 This week’s episode of OUTLANDER on Starz is all about “The Search” for Jamie (Sam Heughan). Learning he has been captured by the British, Claire (Caitriona Balfe) and Jenny (Laura Donnelly) set out to rescue their husband and brother, respectively. But rushing off without a plan could get Jamie into more dire straits than he’s presently in.

I like the arc of “The Search.” The episode begins with Jamie captured, and ends with the same. In the middle, though we do not see him, he is free for a time. However, Claire’s efforts to find him lead to him being nabbed again, or so we hear, which has to make her feel even worse than she already does, her actions resulting in the exact opposite outcome than what she wants.

It’s not all Claire’s fault. Jenny doesn’t have a plan, either, and having just given birth, she shouldn’t be out anywhere. She ends up heading home relatively early on, after a disturbing torture session, needing to return to nurse her child. Then, Claire’s second companion, Murtagh (Duncan Lacroix), comes up with the idea to make a reputation for themselves so that Jamie can find them. But Claire doesn’t just stick to his theory, introducing jazz music (highly amusing!) and trying to pay off a gypsy that is copying their shtick. That the gypsy ends up being helpful probably makes the whole thing a wash, at best.

Even with these setbacks, “The Search” is an entertaining episode of OUTLANDER. Jenny and Claire are still fairly new in their relationship, so it’s nice to see them bonding, even when it involves unwanted, painful branding. Murtagh is often around, but so little is known about him. Claire and Murtagh share one powerful scene this week that really helps flesh out his character.

In the end, though, it’s Clan MacKenzie that must help Claire rescue Jamie. First Willie (Finn Den Hertog) volunteers, then Angus (Stephen Walter), then the rest. Dougal (Graham McTavish) isn’t enthusiastic about the scheme to free Jamie from captivity, believing his nephew doomed, but he does allow his men to participate, so even if he’s not an asset, he’s not a strong detractor, either. Now we’ll just have to wait ‘til next week to see if they succeed, since “The Search” runs out of time before we actually get to the rescue.

A strange thing happens when Claire encounters Dougal in that he proposes she marry him. Dougal is obviously attracted to Claire, given that time he tried to rape her, but he never seems to like her very much. Why would he want her to be his bride? On the other hand, Dougal was in love with Geillis, who has much in common with Claire including being a time traveler, so perhaps he has a type that is not obvious to the observer. Or he just thinks he’s doing her a favor.

Claire is offended because, to her eyes, Dougal is leaving his nephew to die while trying to steal his bride, but I don’t think Dougal sees it that way. He is a practical man, and as much as he likes to fight for what he believes in, he’s not anxious to embark upon a suicide mission. I think if Dougal thought there were a decent chance to save Jamie, he would do so, and his dismissing the idea is purely because he doesn’t see a good way to make that happen.

Similarly, he seems to think he’s being noble by offering Claire protection, not trying to be an opportunist. Dougal is a man of his time, and I believe he is acting in what he thinks is a kind-hearted manner to a relation. Or, at least as kind-hearted as Dougal MacKenzie can get.

Not a lot happens in “The Search,” but it is chock full of compelling scenes, funny moments, and has great character development, especially for Murtagh and Dougal. That makes it a great episode in my book.