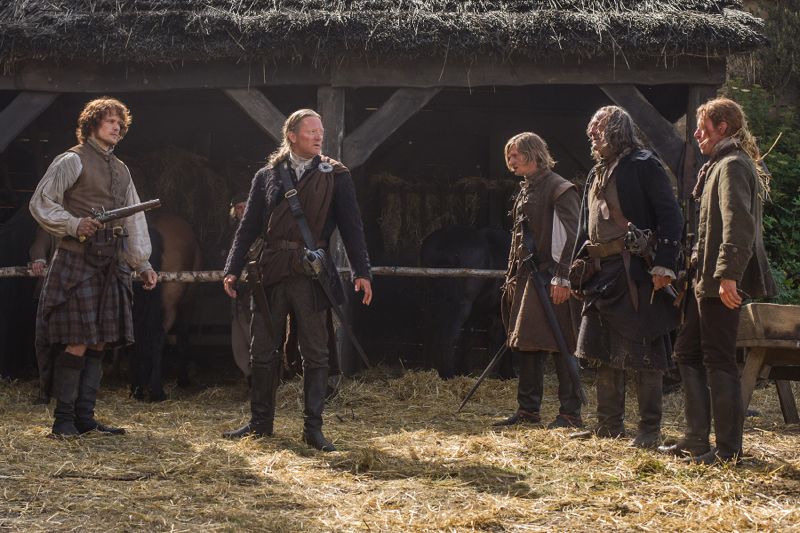 This week’s OUTLANDER on Starz continues Jamie (Sam Heughan) and Claire’s (Caitriona Balfe) stay at Lollybroch. Their safety is threatened, though, when outsiders come to the keep, first Taran MacQuarrie (Douglas Henshall, Primeval) and his men, known as “TheWatch,” also the title of the episode, then Redcoat deserter Horrocks (Lochlainn O Mearainn, King Arthur). Will one of them turn Jamie into the British for the price on his head? Or might the cost to keep them from doing so be even worse?

The first clue that MacQuarrie isn’t as bad as he seems is that Ian (Steven Cree) genuinely seems to like him. Jenny (Laura Donnelly) tolerates him, which is probably about as much one would expect from the lass, but Ian does MacQuarrie favors not to garner praise, but out of sheer respect. This is something Jamie can’t comprehend at first, MacQuarrie and his men being mercenaries who take a “protection fee” from his sister and her husband. But over time, Ian’s impression turns out to be true, MacQuarrie making up for his men’s bad behavior and giving back to the clan generously.

MacQuarrie is an interesting type. The type of security he offers is necessary in this time and place, the British patrolling around and bullying. While it, at first glance, his group might seem like a mob leaning on local business owners, MacQuarrie has to feed and clothe his men, and riding around trying to keep people safe is a full-time job. In this, he appears to be doing honest work for what his clients feel are fair wages. He lives in a grey area, but is not evil.

That conclusion is tested in “The Watch” when MacQuarrie essentially blackmails Jamie into helping him on a raid. The reason this can be overlooked is three-fold. First, he asks Jamie only for a single favor and doesn’t appear to be intending to keep changing or stretching out their terms, even if we would welcome Jamie on his team permanently. Second, the venture seems a reasonable trade for not collecting money he could very well collect. And three, by stealing from the Brits, he can charge the Scottish customers less, and in the minds of both Jamie and MacQuarrie, the British kind of deserve it. Thus, while the situation isn’t the most pleasant, it is reasonable.

“The Watch” again reminds us that Jamie is more a part of this world than ours, as civilized as he might seem at times. He understands MacQuarrie and does develop a sort of friendship with him over the course of the hour, or at least mutual respect. He also executes Horrocks when threatened financially, not bodily, which is about protecting his family, but is certainly more than simple self-defense. That Ian is the one who actually runs Horrocks through gives me even more respect for Jamie’s brother-in-law, a fine man and worthy husband, but that matters not to this point, as Jamie would have shot Horrocks anyway had Ian not shown up.

The end of “The Watch” is yet another cliffhanger. I am glad and surprised to see that Ian survived to return home to his wife and newborn daughter. It’s not so surprising that Jamie is captured. Ambushed as Jamie, Ian, and The Watch are, captured or killed are the two most likely options, far more realistic than escaping. One can assume Ian makes it out because he’s not seen as a threat with his bad leg and he’s the least important target. Jamie is exactly the opposite, and the British already have a price on his head.

Hopefully, Jamie will be rescued. I can’t imagine Claire successfully mounting a defense on her own, and Jenny and Ian certainly aren’t equipped to do so. This seems to necessitate a return to the MacKenzies, Claire needing their assistance, and it will be welcome to see them be back on OUTLANDER. It’s only been two episodes since they were last glimpsed, but they are missed.

The other subplot in “The Watch” involves Claire helping Jenny deliver her baby. The drama over the breach birth is real, given the almost barbaric medical knowledge of the era. But Claire is not from here, and brings enough know-how to see things through to a positive outcome for both mother and child. More importantly, it raises the question as to whether Jamie and Claire will have children, as they seem like natural parents are they are certainly expected to continue the family line.

Claire’s confession to Jamie that she fears she is unable to bear children, given her failure to do so for Frank (Tobias Menzies), is met with typical acceptance and warmth by Jamie. One has to applaud a man for taking what would be, in these days at least, devastating news and seeing past it for love. It shows the depth of his affection for Claire. I can’t help but hope, and assume, that they will manage to do what Claire and Frank could not and produce a kid.

“The Watch” is another excellent installment of the series. Expanding the world with layered characters is always welcome, and it balances a very personal story with action and suspense. Each week, I find myself looking forward to the next installment, and this one is no different. If I had next week’s episode available, I would likely have already watched it.