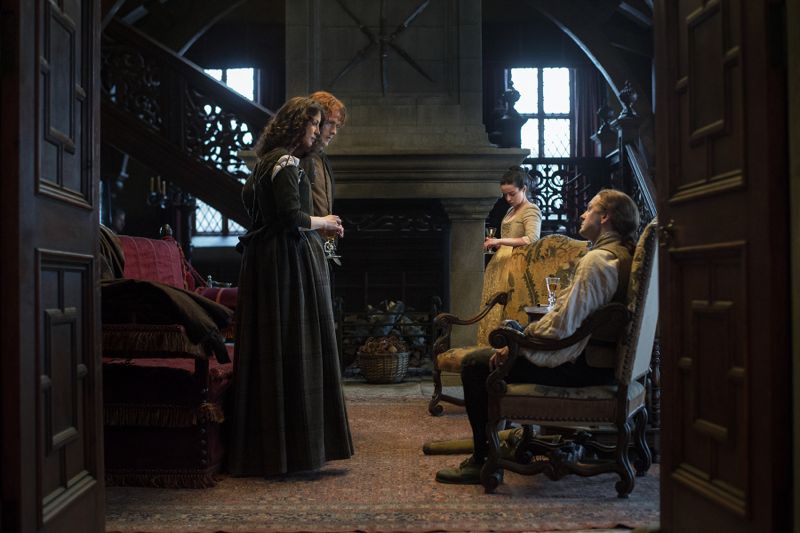 On this week’s OUTLANDER, Jamie (Sam Heughan) brings Claire (Caitriona Balfe) home to meet the family. While they may already be married, it still feels a bit like the dating scene, where Claire is judged by her new relations and she gets herself into the middle of family issues in which she isn’t invited nor wanted involved in. Even if the start is a little rocky, though, the episode, “Lallybroch,” gives us great insight into who Jamie is and what is his life is like pre-Claire.

Earlier this season, we see Jamie flogged by Captain Black Jack Randall (Tobias Menzies) and witness his sister, Jenny (Laura Donnelly), have herself exposed by the soldier. “Lallybroch” begins with the weight of these events hanging between the two siblings, and to help us understand what remains unsaid between them, Outlander shows us more of the past.

Black Jack is cruel, and that is not a new revelation. Nothing he does in “Lallybroch,” from trying to rape Jenny, whose laughter makes him angry but saves her modesty, to wanting to humiliate Jamie through “buggering” him and flogging him again when Jamie refuses, is surprising. He’s a twisted individual, and it makes me wonder again how a man as decent as Frank sprang from this seed, even if Black Jack is quite a bit back in the past.

The other element not known beforehand is that Brian (Andrew Whipp, Emmerdale), Jamie and Jenny’s father, perishes during this. Both Fraser siblings blame themselves for their patriarch’s passing, and that makes it hard to look their kin in the eye. Knowing all that transpired really informs the excellent, uneasy chemistry between Heughan and Donnelly. Their final airing of guilt and affirming their love for one another is that much sweeter because of the hardship.

Claire has been around enough Scots to know their personalities can be a bit rough, but she is not prepared for Jenny’s cold reception to her new sister-in-law, which is tied to Jenny’s uneasiness with Jamie. I guess that, because Jamie always seems more compassionate than the MacKenzie clan, one sometimes forgets that he is part of this society, too, with the same emotional makeup, something I commented on in another recent review, and was still surprised by again this week.

Luckily, one does not have to be like a Fraser to love them. Jenny’s husband, Ian (Steven Cree, Brave), is as good-natured as they come, making up for Jenny’s standoffishness. I think, even though he and Claire don’t really share much time alone together, he is a big part of why she is able to settle in so easily, relatively speaking.

Claire is Claire, so she does cause trouble. She interferes with a man disciplining his son, and speaks up against Jamie in front of his sister. Part of this is being a product of her time, but part of it is just because she’s a woman unable to hold her tongue. That may not be the norm for this place, but it’s not different enough to startle the people of “Lallybroch,” and she is pretty much accepted by the end of the hour.

I greatly enjoy “Lallybroch” and the greater understanding of Jamie it provides, as well as the fun, tense scene at the mill, but I find myself missing the MacKenzies. Outlander is structured to follow Claire; it is not an ensemble piece. When she is away from the supporting characters, we don’t get to see what happens to them. That’s fine, but it’s a testament to the other performers in the series that the episodes in which they are absent make one look forward even more to catching back up with them again.