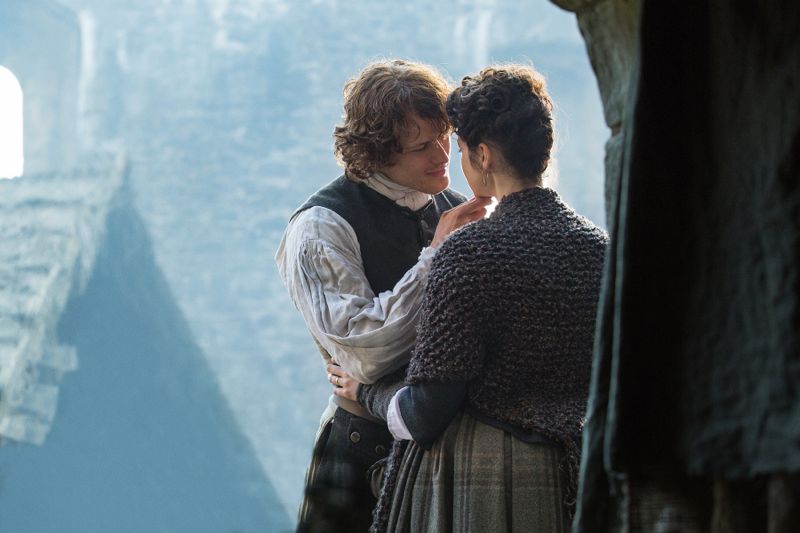 A lot happens in this week’s Outlander on Starz, “By the Pricking of My Thumbs.” Each of the primary players has disagreements with others, and the fall-out from some of these conflicts will cause unpleasantness for some time to come. There is no denying that Claire (Caitriona Balfe) is a part of this time and place now, as she has been seamlessly integrated into history.

The hour begins with Jamie (Sam Heughan) petitioning the Duke of Sandringham (Simon Callow, Amadeus) to clear his name. When Claire warns Jamie than the Duke and Black Jack (Tobias Menzies) are friends, Jamie then sets out to discredit Black Jack. However, it is Claire’s interference that eventually gets Jamie saved, and his own quips that land him in hot water again very soon after.

Watching Claire manipulate and blackmail the Duke is not pleasant. I understand that Claire is protecting her innocent husband against a corrupt system, but the coldness in her eyes is not easy to overlook. She does this with such ease and composure that it feels natural, not like she compromising her morals, and that’s why this is disturbing. Claire can be ruthless when she wants to be.

Jamie seems much more light-hearted. His feud with another clan happens quite by accident, as he trades insults with them after seconding the Duke in a duel. He isn’t trying to start a fight, and only defends himself as far as he must, never on the attack. Jamie is a good man, and his actions stand in stark contrast to Claire’s, making them seem like they might not fit together as a couple as well as they appear to in the opening scene of “By the Pricking of My Thumbs.”

For Jamie’s actions, Colum (Gary Lewis) sends him away. Colum doesn’t give Jamie a chance to explain, which can be overlooked given the other things on Colum’s mind at the moment. Still, despite Jamie’s name being cleared, the outcome is not at all what Jamie and Claire hope for, nor what the viewers would like to see. Our heroes have still more to overcome.

Colum is distracted because of the behavior of his brother, Dougal (Graham McTavish). Dougal has been having an affair with Geillis (Lotte Verbeek) and she is pregnant with his child. At first, it seems like Geillis is counting on fate to bring her and Dougal together, but after both of their spouses die, some begin to suspect foul play, at least on Geillis’ part. Colum sends Dougal away to try to minimize the fall-out to the clan, frustrated with the threat Dougal causes them.

I still think Geillis is a true friend to Claire. I don’t sense anything ill between them, even after Claire accuses Geillis of murder. Geillis’ romantic issues are hers, not Claire’s, and they remain friends, Claire even trying to help Geillis escape the law.

Unfortunately for the both of them, Laoghaire (Nell Hudson) isn’t so kind. When Claire confronts Laoghaire over what she’s been doing, trying to break up Claire’s marriage, Laoghaire not only admits to it, but pledges to keep up the fight. Claire and Geillis’ arrest for witchcraft at the close of “By the Pricking of My Thumbs” is Laoghaire’s doing, as she wins the latest round of battle. So I guess all three main women on OUTLANDER can be pretty bad.

Laoghaire cannot be triumphant for long. Jamie loves Claire, and whatever feelings he had or has for Laoghaire, he is an honorable and dedicated husband. Were Jamie to see what Laoghaire has been doing, he would not approve and it would kill any chance of the outcome she desires. I guess she thinks that she can get away with being sneaky, but that doesn’t seem likely.

Will Claire’s relationship with the Duke, tenuous as it is, get her and Geillis out of trouble? Or at least save Claire? If he is the one to sit in judgment over the girls, they stand a chance of getting off without too much trouble. Claire still has the dirt on him, and Laoghaire’s evidence is faked, so cannot possibly hold up to much scrutiny, even by old court standards. Claire has friends in the castle who will surely speak up for her. I don’t think this is a serious, lasting problem, dire as the situation might seem in the cliffhanger.

OUTLANDER certainly knows how to keep things exciting. None of what goes down in “By the Pricking of My Thumbs” is expected, at least not by those who haven’t read the book series, and drama keeps building. The characters are well-defined enough at this point to get a read on them, yet they still have hidden depths to be explored, such as when we learn about Dougal and Geillis’ affair. Even if not a lot happens in this hour, I come away satisfied and ready for the next installment, which sadly is a full week away.