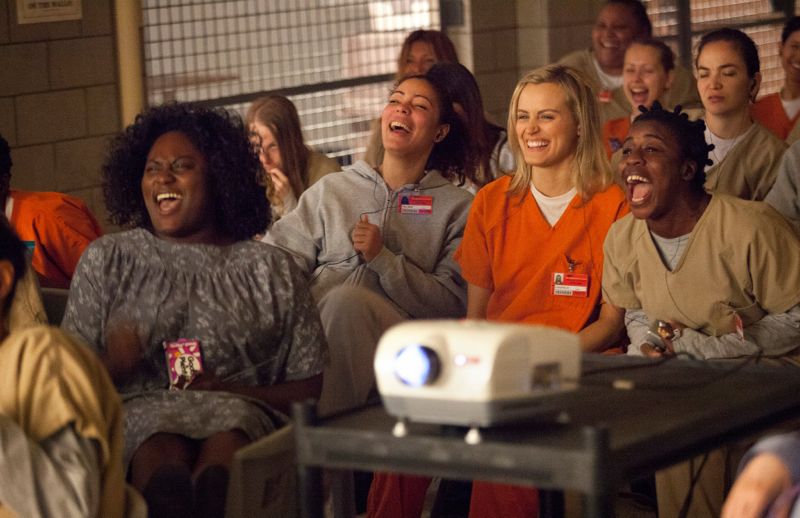 Netflix’s latest original series, the first season of which is now available, is called ORANGE IS THE NEW BLACK. From Weeds creator Jenji Kohan, the hour-long dramedy (much more drama than comedy, though it has its moments) follows Piper Chapman (Taylor Schilling, Mercy), who made a bad decision ten years ago while in an ill-fitting relationship, and now faces fifteen months in prison.

For those expecting another version of Weeds, a la Nancy Behind Bars, this is not that show. Instead, it’s an (I’m told) realistic look at life behind bars, the various personalities in such a place, and the pressures and stresses of the situation. Chapman is dropped, out of her element, into a motley crew, and must find her place while trying to keep her wits about her.

The story is told non-linearly, with pieces of the puzzle falling into place throughout the hour. We see Chapman’s first twenty-four hours in lockup. We see her previous tryst with Alex Vause (Laura Prepon, That ‘70s Show), and how she gets involved in the drug business, albeit barely. We see how Chapman’s current fiancé, then boyfriend, Larry Bloom (Jason Biggs, American Pie), handles the revelations about Chapman’s past, and vows to stick by her side.

I like that we get all of this out of order. Somehow, it flows, from an emotional stand point, and it’s not confusing if one is paying attention. Obviously, in this situation, Chapman has a lot going through her mind, so it’s understandable that other scenes are replaying for her and for us.

Like Chapman, prison is a place that seems harmless enough to the viewer, until it suddenly isn’t. It’s a foreign land full of strange, unwritten rules. Chapman thinks she is bonding with Red (Kate Mulgrew, Star Trek: Voyager), until an inadvertent comment means Chapman will be going hungry. She gets kindness from others, too, but it’s hard to tell if any of it is genuine, or if she is being set up or used or put in debt.

Chapman has a lot of time ahead of her, and we know she will likely eventually find her place. That, or go mad, but how likely is that for the protagonist of a series? Then again, this is Netflix, not broadcast television, so predictable rules may be thrown out.

Schilling is perfect in this role, the kind of part she proved she deserved on her last ill-fated series. She can handle the ups and downs, making us think she has it together, but being completely sympathetic and authentic when she suddenly shows her vulnerability. She is tough, but scared. She is capable, but out of her element. The actress slays the part.

The cast is stocked with other amazing performers. Among those that stand out in the first episode are Natasha Lyonne (American Pie) as a drugged-out cellmate and Yael Stone (Spirited) as a wise, kind-hearted mentor. We also see Weeds alumni Michael Harney and Pablo Schreiber. But more amazing are the numerous faces that aren’t well-known, yet still convey a power and an allure that promise we will grow to like and respect them. Great care has been made to fill the place with women who look like they belong, and are also wonderful actors, painting a varied landscape.

The story itself is an interesting premise. While ORANGE IS THE NEW BLACK will follow Chapman, obviously, it will also explore a number of other inmates, and in them lies countless other tales to be told. This is a world few venture into by choice, and when the nature of the place is exposed so plainly like this, and with such talent in putting it together, eyes are sure to be opened.

Is prison a cruel place? Undoubtedly. But it may also be the place in which some women find themselves and what they are capable of.

What will be most intriguing is how Chapman can possibly go back to her happy life with Larry after the experience. She is sure to be changed to her core, and readjusting to the civilian world afterwards cannot be easy. She is warned to view this experience as something to build up, and then wipe away. Will she be able to do that? It seems like it would take a special person.

The surprise ending to the first episode leaves the door open for a couple of possibilities. Is what we see real, or is it in Piper’s head, since she has been pushed to the breaking point? Both are intriguing paths, and so the only thing known at this point is that the installment ends well.

All thirteen episodes of season one of ORANGE IS THE NEW BLACK are available on Netflix now.