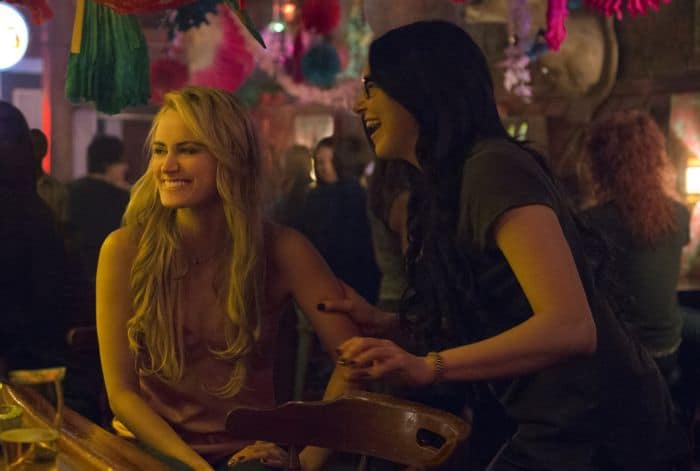 Netflix’s ORANGE IS THE NEW BLACK has returned with a second batch of episodes, beginning today, streaming for their subscribers. It is the story of a woman named Piper Chapman (Taylor Schilling), who is serving fifteen months in prison for her role in a drug ring, which she got involved with through her girlfriend at the time, Alex Vause (Laure Prepon). Piper’s life has drastically altered and she has to learn to her adapt to her new world while, possibly for the first time, recognizing the humanity in others.

As season two begins in “Thirsty Bird,” Piper has been in solitary for beating would-be assassin Pennsatucky (Taryn Manning) severely. In the middle of the night, Piper is ripped from her cell, taken by bus and plane to a much higher security facility in Chicago without explanation. Panicking, Piper now has to adjust to an even tougher world with more dangerous inmates.

This is a very well-crafted hour. I feel Piper’s frustration and terror at not knowing what is happening and being unable to get answers. As a prisoner, she has few rights, and information about where she is being taken and why is not among them. Those working for the system have no obligation to be forthcoming because she is low on the totem pole, but it would still be extremely unsettling to be the one so out of control of oneself. Much of ORANGE IS THE NEW BLACK is about life as an inmate, and “Thirsty Bird” hammers that helplessness home more than most installments.

Unfortunately, it cannot salvage the character of Piper, a drama-addicted narcissist who is wishy washy with her moral compass and often does and says the wrong thing. A flashback to her childhood, showing when Piper catches her father, Bill (Bill Hoag), cheating, and her mother, Carol’s (Deborah Rush), bad reaction to the news does inform on why Piper is the way she is, but it doesn’t make her sympathetic. Her forgoing the chance to pee in her search for answers, then paying for that decision later, illustrates how ridiculous she is in her self-righteousness. We, like her potential father-in-law / lawyer, Howard Bloom (Todd Susman), grow frustrated that she can’t pull herself together, but are done rooting for her.

One wonders if there is a happy way out for Piper. Her fiancé, Larry (Jason Biggs), seems to be done with her, though he remains a main character, so forgiveness is a possibility. Her sentence is likely to be lengthened both from beating up Pennsatucky and because she lies under oath. She doesn’t have anything to go back to, anyway, though.

For some reason, Alex is more likeable than Piper. Yes, she betrays Piper, twice, but she is consistent. We know who Alex is, and Alex actually shows compassion for others. Even if she does stab Piper in the back by convincing Piper to lie on the stand and then confessing the truth herself, Piper deserves it, so it’s hard to be mad at Alex, someone who has the right crisis of conscience at the right time. Sadly, Prepon has been down-graded to “special guest star” status, so she isn’t likely to be around much, if at all, moving forward. This makes sense because her arc with Piper has run its course, but is regrettable because I hate to lose the character.

What “Thirsty Bird” is lacking, despite being a terrific stand-alone, isolated episode, is the ensemble that makes ORANGE IS THE NEW BLACK so good and gives the show its identity. All of the various women who are locked up with Piper have become memorable and intriguing personalities. From Red (Kate Mulgrew) to Crazy Eyes (Uzo Aduba) to Taystee (Danielle Brooks) to Nicky (Natasha Lyonne), all of whom are now main characters, as well as a slew of recurring parts, each has landed with the audience. I miss them, none of them appearing in this season premiere.

In episode two, I assume things will get back to normal, and I look forward to that. At the same time, I don’t think ORANGE IS THE NEW BLACK makes a mistake by departing here because, as I said, taken on its own, the hour is solid, even if it doesn’t feel like the same show. Plus, it furthers along the story of the protagonist, Piper, and what is going on with her case. Great start, Netflix, and I look forward to what else the show has in store for us this year.

All thirteen episodes of ORANGE IS THE NEW BLACK are available now on Netflix.