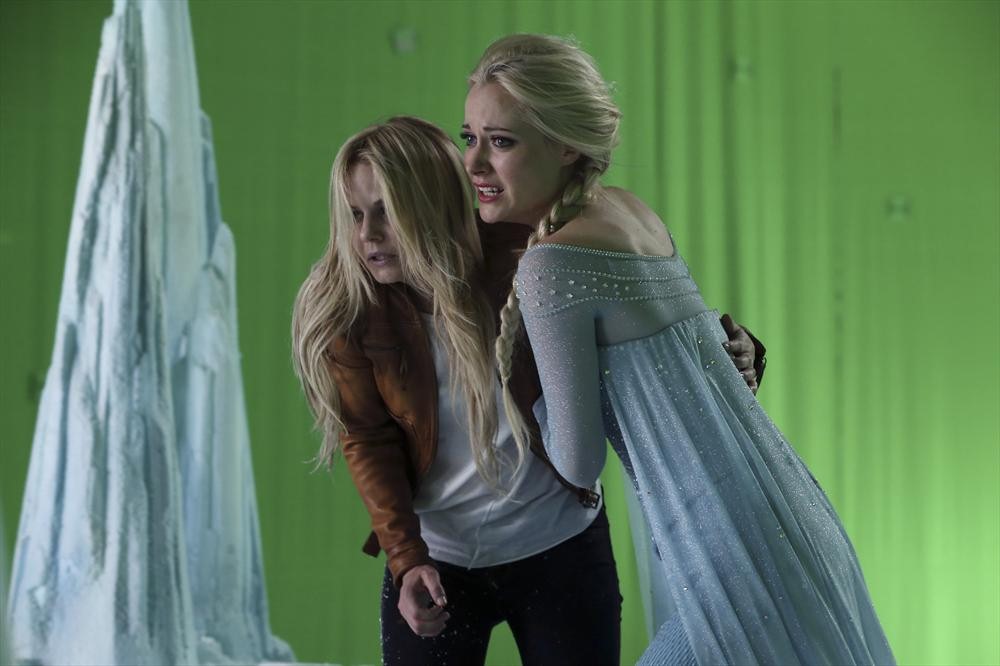 Tonight’s ONCE UPON A TIME is called “White Out.” Panicked as she searches for her sister, Elsa (Georgina Haig) accidentally traps Emma (Jennifer Morrison) in an ice cave, where she slowly begins to freeze to death. David (Josh Dallas) and Hook (Colin O’Donoghue) try to figure out a way to free Emma before it’s too late, and Mary Margaret (Ginnifer Goodwin) steps into her new role as mayor. Meanwhile, back in the Enchanted Forest, David is inspired to become a hero after an encounter with Anna (Elizabeth Lail), queen of encouragement.

“White Out” is really good with character development, but poor on plot logic. The power goes out and the people go to Mary Margaret, who has absolutely no electrical training, to solve the issue? They don’t just ask her to have someone fix it; they expect her to get the current running again herself. And somehow, she is able to, doing things that have nothing to do with the downed power line that causes the problem in the first place, and with a baby near dangerous circuits. Emma is too weak to talk or sit up, but then is able to limp out of the cave. Hook keeps sticking his hook into the ice, even after David stops him. Elsa thinks she can’t melt the ice, but does tunnel through on the first try, only to have that option fail again when she attempts to repeat it. These things just don’t make a lot of sense.

Luckily, most of the episode is character-centric. Take Mary Margaret, for instance. With the townsfolk looking to her as mayor after Regina shuts herself off, Mary Margaret has to find her strength and step up. She is their leader, and she needs to start acting like it. It’s not a surprise that ONCE UPON A TIME goes to this place, only that it hasn’t done so before now. It makes sense for Mary Margaret to take on this role, and gives her something to do in the hour other than sit at home.

The scenes between Elsa and Emma are even better. Here are two women that have a lot in common. They’ve had to fend for themselves, having lost loved ones, and have powers they don’t understand or entirely control. They are expected to save the day, even when they don’t know how, and they are emotionally stunted. Yet, during their entrapment, they find a way to connect and become friends, a bond that lasts past when they get free. It’s because of this connection that the danger Elsa has placed others in can be overlooked, Emma able to see past the mistakes, which all the characters have made at one time or another, to the type of person Elsa really is.

It helps that David knows Anna, too, from before he meets Snow and becomes king. When David lacks courage and conviction, Anna helps him find it, much as she does for her own sister in the film Frozen, which is set prior to the events depicted in ONCE UPON A TIME. Anna is just the type of person who can bring out the best in people. Snow and the kingdom have her to thank for David becoming the man he is, and because of David knowing Anna, he knows a little about Elsa, too, making him smart enough not to strike out at her.

Thus, only two episodes in, ONCE UPON A TIME has avoided painting Elsa as a villain. This is good because fans of the movie wouldn’t like her being evil, and it allows the plot to move forward. There are enough misunderstandings in this show, so no more are needed.

Among the other great character bits in “White Out” are Emma falling into Hook’s arms once freed and Henry (Jared Gilmore) refusing to give up on Regina (Lana Parrilla). It really is a moving, heart-warming episode.

There are also some new baddies introduced this week. Bo Peep (Robin Weigert, Sons of Anarchy) is a wicked mob boss / warlord who still lives on in Storybrooke, and thus may pop up again. The owner of the ice-cream shop (Elizabeth Mitchell, Lost, Revolution) has some dark, icy powers, too. Their arrival is none too soon, as Regina is no longer bad enough to cause real trouble, and ONCE UPON A TIME needs a villain to defeat. That’s the nature of fairy tales.

Regrettably, Rumple (Robert Carlyle) also appears to be going down the wrong path. He clearly has something to do with Anna’s disappearance, which apparently happened many years ago, making it more tragic, and doesn’t speak up about what he knows when David comes asking. This, combined with other recent actions we’ve seen him take, does not bode well. It’s really sad that he’s being like this, given his heroic sacrifice last year and recent marriage. It kind of ruins the character to bring him so far, then have him backslide so much. Hopefully, that will straighten itself out soon.

In all, “White Out” is a pretty good installment. The weaknesses tend to be minor things that are swept quickly past, while drawn out scenes give us meaty dialogue and pathos that explore the various personalities featured. There may still be no sign of our Knave (Michael Socha), other than the actor’s name in the opening credits, but season four is shaping up to be an intriguing mystery that I look forward to seeing solved. It’s already far better than last spring’s Oz arc, a sign the show is back on track.