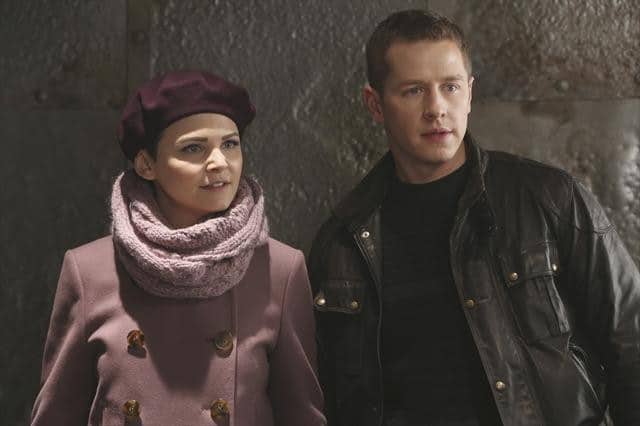 This week’s ONCE UPON A TIME is entitled “The Queen is Dead,” and, for the first time, we see Snow’s mother, Queen Eva (Rena Sofer, 24, Covert Affairs), albeit on her death bed. She doesn’t have much time left, and young Snow is desperate to save her mom’s life, the doctor (Duncan Ollerenshaw, Hell on Wheels) being clueless as to an effective treatment. However, when tempted with dark magic, Snow remembers the lesson her mother taught her, and chooses good over evil, allowing her mother to die rather than trade another’s life to save Eva’s.

“The Queen is Dead” reveals that Rumple (Robert Carlyle) isn’t the only one who plays the long game. Cora (Barbara Hershey) murders Eva and poses as the Blue Fairy (Keegan Connor Tracy) to tempt the child Snow White (Bailee Madison). Then, Cora continues to offer Snow chances to make the wrong decision throughout her life, presumably, always trying to ruin Snow’s spirit and turn her dark.

Why does Cora go to such lengths? What does she have against Snow? Does she just delight in destroying a good person, or does it go deeper, an old feud with Eva perhaps? We have to believe that Cora and Eva have a past that causes this rivalry and sets Cora on such a destructive path. Otherwise, she is just plain cruel.

Quick side note, Bailee looks a lot like grown up Snow, so for that, I appreciate the casting, but can’t the actress dial it back just a bit? I know she’s only a child, but the overacting does detract from the story a little, and it’s more obvious here than in past installments.

In modern Storybrooke, Snow (Ginnifer Goodwin) is once again tempted to not do the right thing when Cora and Regina (Lana Parrilla) hold Snow’s old friend and servant, Johanna (Downton Abbey’s Lesley Nicol), hostage, offering to trade Johanna’s life for the Dark One’s dagger, which Snow has, so that they can control Gold. Snow chooses to hand over the weapon, despite the possible repercussions, but Cora murders Johanna anyway, and Snow vows revenge.

ONCE UPON A TIME often flirts with motivation and gray areas, making the good characters not completely good and the bad ones not completely bad. Snow is the epitome of the hero, the lightest of the light, and to send her down such a dark path is surprising and disturbing. If Snow can’t keep her heart pure and pass Cora’s tests, does she deserve to be the ruler of the kingdom? Or, more likely, is this just another obstacle she needs to overcome on her journey?

Snow asks Charming (Josh Dallas) why she should be good if she keeps losing the people she loves as a consequence. What Snow is having trouble seeing right now is that a victory is hollow if you can’t live with yourself afterwards. It’s better to lose righteously, no matter the cost, than to win by cheating. This is a hard lesson, difficult to understand, and one most people will never be able to live up to. If Snow can, in fact, stay true to herself, it’s what will separate her from others and prove that she should be queen.

Regina seems destined to learn the opposite lesson. We see her waver when Cora murders Johanna, but only for the briefest of moments before firmly sticking to her mother’s side. I wish we would get a little more conflict in Regina’s character, considering how hard she has been working to be good, and she clearly doesn’t trust her mother completely. Yes, Regina has spent a long time on the wrong side, and Snow’s approach of “generously” offering her one more chance backfires. But if others would actually be kind to her, and treat her like a friend, even if she hasn’t yet earned it, I do believe that Regina could still be saved.

In New York, Hook (Colin O’Donoghue) catches up with Rumple / Gold and stabs him with a poisoned hook. The only cure is in Storybrooke, and the only transportation swift enough to get Gold home in time is Hook’s ship. Neal (Michael Raymond-James) surprises everyone by offering to sail it.

There is a really great scene in “The Queen is Dead” when Emma (Jennifer Morrison) asks Neal why he would help Gold, his father, whom he hates. Neal tells her that it’s different to hide from his dad versus letting him die, and he’s doing the right thing. This is a moment where we see Neal, despite his flaws, is a hero. He may also be a petty thief, but maybe he has his reasons for that, and he now chooses to save someone he doesn’t like when he can so much more easily allow him to perish. This is an interesting development, as Neal seems a shady character prior to this, even more interesting than learning Neal has a fiancé.

Neal hints that he has many travels between fairy tale land and ending up in New York, and I’m curious to see them. He obviously spends time in Wonderland, given the décor of his apartment, and I find it likely that he is in Oz for awhile, based on past dialogue, even though Oz has not yet been established as a realm in ONCE UPON A TIME. What events have shaped his life? Should Neal be sticking around, as I hope he will, this will have to be explored.

It’s very disappointing that Gold now hates Henry (Jared S. Gilmore) so thoroughly. I had hoped there would be some internal conflict for Gold, since he seems to have a soft spot for Henry before now, and Henry is his grandson. Yet, realizing that Henry will be his undoing, as foretold by the seer, Gold has turned completely, all of the sudden showing a lot of hostility towards the boy, who of course deserves none of it. Unless, perhaps, Gold thinks the poisoning is the ultimate destruction Henry is connected with, which doesn’t seem likely, but could explain the anger in the moment.

It could very well ruin Gold and Neal’s relationship forever if Gold makes a move against Henry, even should he fail, which he most likely will. Neal seems quite happy to get to know his son, and will surely want to protect him. Considering the low regard in which Neal already holds Gold, any attempt Gold makes to hurt Henry will only alienate him further.

By contrast, Gold is willing to tell Emma, who tells Snow, where the dagger is. This is a show of trust. It may be for selfish reasons, but I’m not so sure Gold would have given away this information before now, because whoever possesses the dagger can control him. It’s a big sacrifice of free will on his part, and he has to know that giving it over to Emma means she can use it to stop him from hurting Henry, should a showdown occur, and thus lead to his own destruction. So it doesn’t seem like his soul is completely gone, even as it bends the wrong way in this episode.

There is lots brewing in “The Queen is Dead,” and the same arc will likely continue next week in “The Miller’s Daughter,” which, based on the title, should involve Regina and Cora in the flashbacks. ONCE UPON A TIME airs Sundays at 8 p.m. ET on ABC.