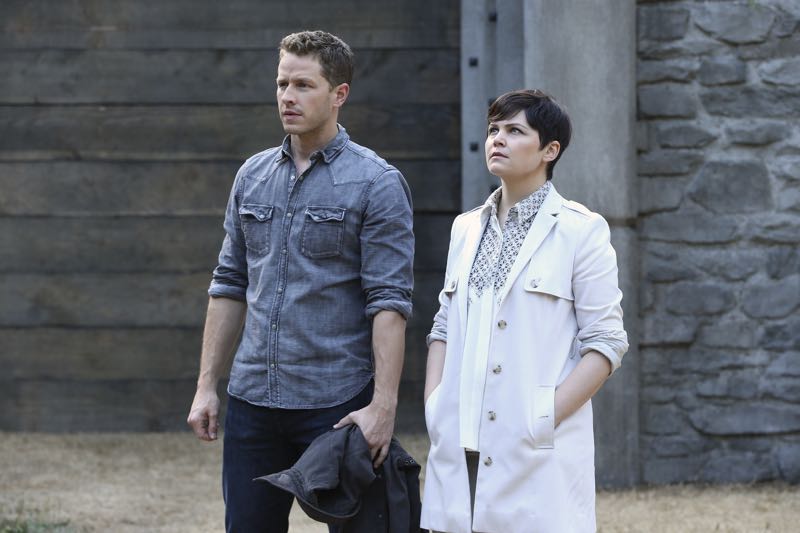 This week’s installment of ONCE UPON A TIME is entitled “The Price.” An evil creature is unleashed upon Storybrooke, coming to collect an unpaid price from magic used. Because only Emma (Jennifer Morrison) has memory of the past six weeks, only she knows why it’s here. She says it’s Regina (Lana Parrilla) who has drawn it to the hamlet. Can Regina step up and be the hero that the town needs?

I’d be lying if I said I weren’t enjoying the role reversal of Emma and Regina. Regina has long been my favorite character, and to see her trying to be the Savior while Emma descends into darkness is great. But I feel like “The Price” is a bit too on-the-nose in portraying this. The situation is too perfect, and because Robin Hood (Sean Maguire) is the life threatened, Regina doesn’t even have to be all that selfless to save him, already being in love with him. It would have been much more powerful to see Regina struggle to step up or do the unexpected for someone she doesn’t care as much about.

That being said, it’s satisfying that the town begins to back up Regina. Many do not believe she has it in her to be the Savior, Leroy (Lee Arenberg) chief among them. And Leroy is one who ends up supporting her and believing in her later. I am sure Regina can be a hero, though not entirely sure she can be the Savior. But I like that Regina has shown enough goodness that others are standing up and paying attention.

On the other hand, I am not entirely convinced Emma is as evil as she seems. She definitely has some darkness in her; the scene where she and the Dark One (Robert Carlyle) look at Excalibur shows she’s still trying to grab power. Yet, she isn’t actively trying to hurt anyone. Rumple, as the Dark One, didn’t always act malevolently. Often, he stayed at home and was just selfish. Emma is displaying the same characteristics, and it leaves me wondering why everyone is so bent on destroying the Dark One. Sure, they want Emma back, but it’s not like the Dark One seeks to kill everyone and destroy the town or anything.

There is the curse, though. Dopey steps across the town line and becomes wrapped up in a tree. Why has Emma cast this curse? What is her purpose? Why did she bring the Camelot group back with her? These are the unanswered questions that will give great insight into this year’s plot when they are revealed.

In Camelot, we see Percival (Andrew Jenkins) try to kill Regina, knowing she was the Evil Queen. He is stopped, David (Josh Dallas) slaying him, and that is when Emma uses deep magic to save Robin Hood at the request of Regina, spurring the creature who is in Storybrooke. (Albeit six weeks late, no? Did it get lost on the way?)

What confuses me is why Arthur (Liam Garrigan) and Guinevere (Joana Metrass) don’t raise a finger to defend their knight. True, these strangers in their midst have come as Merlin’s prophecy said they would, and the king and queen expect something to happen because of them. But why aren’t they more upset that one of their Round Table has been killed? Why does no one in the kingdom, people that know less about the prophecy, demand justice that the interlopers have killed one of their own? Doesn’t anyone seek to know why he attacked? Is the prophecy so clear and so important that and so widely known that the kingdom would allow friends to die in order to not stand in its way? I have serious doubts it will prove to clear this up.

“The Price” is a worrying hour. On the whole, it’s very enjoyable, with some great dialogue and performances. Yet, the holes I’m poking, while not entirely being exposed as flaws yet until we have more information, point to an uneven, non-cohesive story. ONCE UPON A TIME often falls into this trap, starting out strong and then losing steam along the way. It’s a little too early in the fall to be seeing these stumbles, and it makes me worry that season five will not pay off as it should.

At least we get to see Henry (Jared Gilmore) fall for young Violet (Olivia Steele-Falconer, Red Riding Hood) not once, but twice! That softens the blow of the underlying flaws of the hour.